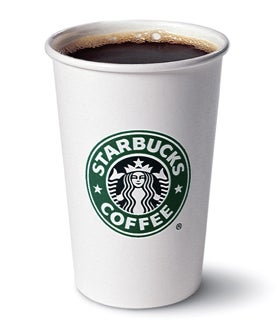 If you're old enough to remember the infamous
Liebeck v. McDonald's Restaurants
hot coffee lawsuit, you might also remember the time known as B.S., or Before Starbucks. The Seattle-based company may have been founded in 1971 — nearly 21 years before 79-year-old Stella Liebeck spilled a a 49-cent cup of McDonalds joe on her thighs, resulting in third-degree burns and a final settlement of more than $500,000 — but its place in our lives was solidified in the early to mid-1990s. In 1992, the same year as the Liebeck incident, Starbucks made its initial public offering. Three years later, it launched the now-ubiquitous Frappuccino. A year after that, it opened its first stores outside of the US. And, the rest is history.

Advertisement
But not quite. In a "Retro Report" today, The New York Times' Hilary Stout argues that while the B.S. era in which Liebeck was burned is long gone, we're still surrounded by high-temp potations, due in no small part to the Starbucks Siren. "We have become a society that totes hot liquids everywhere," she writes. "Our palms seem to be permanently attached to an elongated cup with a plastic lid."
Some of Stout's facts might be a little muddied. "Within the ensuing years [of Liebeck's spill] some genius invented a sculptured lid with a little sipping hole in the top," she asserts. Not quite. Solo debuted its Traveler Lid model in 1986, six years before Liebeck and her grandson pulled up to that drive-thru window. Paola Antonelli, the Museum of Modern Art's senior curator in the Department of Architecture and Design, writes that "the Solo was the only one that could also accommodate the foam of the cappuccinos and lattes that were becoming the rage in those days." Even before the Solo Traveler, pull-tab style lids were commonplace. So, the fact that Liebeck removed the lid entirely from that fateful cup probably had little to do with its sipping design.
Stout also suggests that the milk added to today's lattes might drop the temperature of a given drink a few degrees, shielding customers from a Liebeck-style burn. But, Starbucks steams its milk between 150 and 170 degrees Fahrenheit; the American Burn Association claims that just one second of exposure to 155-degree liquid can cause a third-degree burn.
It is true, however, that more vehicles now have cup holders installed — the 1989 Ford Probe in which Liebeck was seated had none — though they were hardly nonstandard back then. And, yes, a man named Jay Sorensen patented what might be the first cup sleeve in 1993. "Coffee technology has definitely come a long way," writes Stout. So, she is very correct in proposing that all of these advancements have made us a little too carefree with our hot cuppas around babies and straphangers. At one New York hospital, she reports, 70 percent of the patients hospitalized for tea or coffee scaldings are children under 6 years old.
The bottom line? Coffee is still hot, people. Be careful. (NYT)
News
Watch Madison Cawthorn’s Voting Conspiracy Fall Apart Durin...
Madison Cawthorn, the youngest member of Congress, has wasted zero time getting to work as North Carolina’s newly-appointed representative of the state?
by Danielle Campoamor
News
Giuliani Claimed Dominion Voting Systems Was Run By “Commun...
It’s going to take a little (read: a lot) more than a calendar change and a well-intentioned resolution to turn things around for former President Donald
by Danielle Campoamor
News
It’s Official: Sarah Huckabee Sanders Is The First From Tru...
Former White House press secretary Sarah Huckabee Sanders is officially jumping back into politics, in perhaps the most unexpected (yet terrifying) way. A
by Asia Ewart
News
Thank You To Chuck Schumer, For Mixing Up “Erection” ...
As lawmakers are preparing to hold former President Donald Trump accountable on impeachment charges of inciting an insurrection, Senate Majority Leader Chu
by Erin Corbett
News
Trump Is No Longer President. How Will This Affect The Senate Imp...
On Friday, House Speaker Nancy Pelosi announced that she will deliver articles of impeachment against Donald Trump to the Senate this coming Monday, which
by Erin Corbett
News
Of Course Marjorie Taylor Greene Is Already Trying To Have Biden ...
Just one day after President Joe Biden was inaugurated, newly-minted Republican Rep. Marjorie Taylor Greene, a supporter of the QAnon conspiracy theory, ha
by Erin Corbett
News
QAnon’s Big Inauguration Day Theory Was Proven Wrong. What ...
As Joe Biden was inaugurated on Wednesday, some people breathed in a sigh of relief to see that the Trump administration had finally come to its end. Other
by Erin Corbett
News
Biden Is Already Trying To Protect Trans Rights — & He Woke Up Al...
On Biden’s first day in office, he signed an executive order promising to uphold federal protections for LGBTQ+ Americans. It was an important move, even
by Britni de la Cretaz
Kamala Harris
“Even As We Hurt, We Grew”: What Vice President Kamala Harris Mea...
We all know President Joe Biden and Madame Vice President Kamala Harris aren’t going to fix everything wrong with this country overnight. They are not pe
by Simone Oliver
News
Ted Cruz Is Unclear On What The Paris Climate Agreement Is. Lucki...
President Joe Biden is already busy undoing some of the legislative harm caused by the Trump administration in his first 24 hours in office. He has signed
by Erin Corbett
Donald Trump
Trump Actually Made One Last Pardon Before Leaving Office — As A ...
After pardoning over 70 people on the final day of his presidency, including Lil Wayne and Steve Bannon, Donald Trump added one more at the eleventh hour.
by Britni de la Cretaz
Living
Meanwhile, Al Gore Reported On The Inauguration From What Appears...
Thanks to the inauguration of now-President Joe Biden and Vice President Kamala Harris, the internet is flooded with so much content: We have Bernie Sander
by Sarah Midkiff
Discover
R29 Stories & News
Watch
R29 Original Series & Films
Shop
R29's Most Wanted