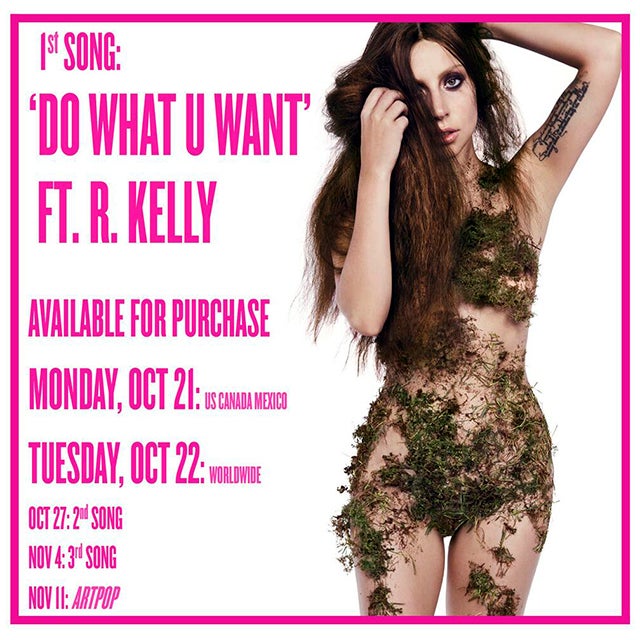 Photo: via @ladygaga.
Sometimes, she'll throw on skyscraping heels, or maybe there's a meat dress. Other times, there's just a whole lotta look. But, one thing is constant: Lady Gaga is always up to something.
With the release of her latest album, ARTPOP, Gaga makes no exceptions. Over the next couple of weeks, the pop star will debut one song per week to showcase the variety of genres she and her producers have dabbled in on the new album (take that, music leaks!). Naturally — literally — Gaga stripped down to make the announcement, wearing only moss. It's a style we've come to dub the Moss Dress: the herbivore's answer to the carnivorous meat dress (and likely less aromatic, too).
Advertisement
So, set an alarm for October 21, when the first song of the series, "Do What U Want," hits the digital market. Based on the 30-second preview, our ears are in for a R&B/pop menagerie, with R. Kelly holding his own alongside Gaga's call to, er, strip her down. 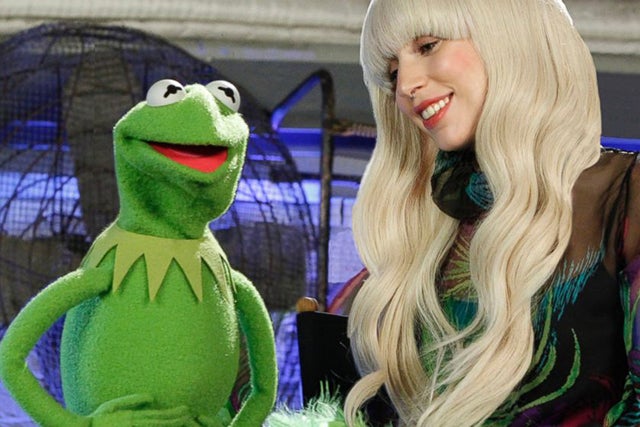 Photo: Courtesy of ABC.
Don't expect her to strip down for the holidays, though. Sure, she's made us rethink our definition of "spreading Christmas cheer," but this season is all about keeping it PG. ABC officially confirmed a Gaga holiday special starring The Muppets today. Lady Gaga & the Muppets' Holiday Spectacular will air on November 28 and have guest appearances from Joseph Gordon-Levitt, Sir Elton John, Kristen Bell, and RuPaul. And, no, Gaga won't be covering her perma-nude body with Kermit again — we think. (ABC)
Advertisement
Entertainment News
Nicki Minaj’s Brother Sentenced To 25 Years To Life In Pris...
Two years after being convicted of the sexual assault of a child in the state of New York, Nicki Minaj’s older brother Jelani Maraj has ju
by Ineye Komonibo
Entertainment
Kobe Bryant, Former NBA Star, & Daughter Killed In Helicopter Crash
Former NBA player Kobe Bryant has died following a helicopter crash in Calabasas, CA. The Los Angeles Times reported that a helicopter crashed into a hills
by Courtney E. Smith
Entertainment News
Bachelor Nation Reacts To Tyler Gwozdz’s Sudden Death
On January 22, former Bachelorette contestant Tyler Gwozdz died after being hospitalized following a suspected drug overdose, People confirmed Thursday. He
by Kaitlin Reilly
Entertainment News
Prince Harry & Meghan Markle Will Leave Their HRH Titles Behind —...
When Prince Harry and Meghan Markle announced that they would be taking a step back from the royal family, there was a lot of confusion about what, exactly
by Lydia Wang
Pop Culture
Cameron Diaz & Benji Madden Got Creative With More Than Their Bab...
One of the toughest decisions parents must make is what to name their child. What’s in a name? How creative should you get? Should you continue family na
by Tara Edwards
Entertainment News
One Of R. Kelly’s Girlfriends Has Reunited With Her Estrang...
When Surviving R. Kelly first aired on Lifetime, the world was introduced to the harrowing personal stories of women who alleged that the R&B singer ha
by Ineye Komonibo
Entertainment
American Horror Story & The OA Actor Dead At 27
Hollywood has lost another star. Harry Hains, popular for his roles in shows like Ryan Murphy’s award-winning American Horror Story and the beloved sci-f
by Ineye Komonibo
Entertainment News
R. Kelly’s Girlfriends Got In A Fight On Instagram Live & N...
As if the charges he’s currently facing weren’t already gravely serious, R&B singer R. Kelly’s legal situation might be getting even more complic
by Ineye Komonibo
Entertainment News
Silvio Horta, Creator Of Ugly Betty, Found Dead At 45
TV producer and creator of ABC’s Ugly Betty Silvio Horta has died, according to Deadline. Reports around the cause of death vary at this time. Refinery29
by Kaitlin Reilly
Pop Culture
Riverdale‘s Vanessa Morgan Tied The Knot With A Ce...
Vanessa Morgan and MLB star Michael Kopech have tied the knot. Morgan, who plays Toni Topaz on the hit CW show Riverdale, and Kopech, a pitcher for the Chi
by Alejandra Salazar
Entertainment News
Leaving Neverland Accusers Can Sue For Sexual Abuse, After...
As of January 1, 2020, a California law preventing victims of childhood sexual assault from filing a claim against a corporation after the age of 26 has un
by Sarah Midkiff
Movies
Time’s Up Addresses Exploitation In Auditions, Nude Scenes & Work...
Time’s Up has taken a major step to empower workers in the film industry. The organization debuted its three-part guide to working in entertainment to ed
by Sarah Midkiff
Discover
R29 Stories & News
Watch
R29 Original Series & Films
Shop
R29's Most Wanted