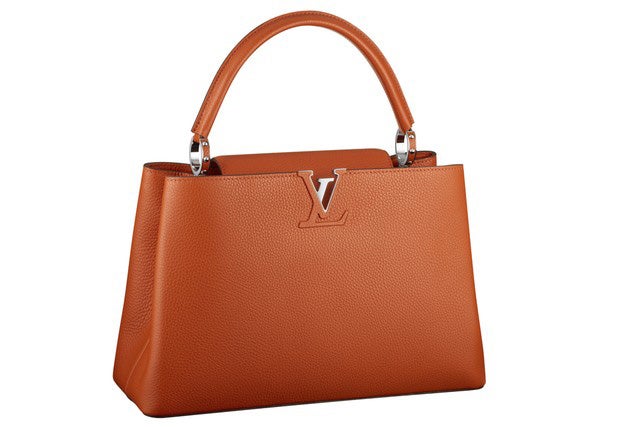 Photo: Courtesy of Louis Vuitton.
For decades, Louis Vuitton's monogrammed canvas bags have been the brand's most ubiquitous asset. In our humble opinion, they were pretty much the status symbol of the early and mid-aughts. But, now, in an attempt to compete with more profitable luxury brands, the French fashion house is upping the handbag ante in a major way.
According to WWD, LVMH's CFO Jean-Jacques Guiony announced in a conference call that the company is beginning a shift toward higher priced accessories with higher quality materials (leather, leather, and more leather!). In short, Louis Vuitton is trying to be more like Céline and its enviable luggage totes.
The brand has already had success with two different high-end totes, the new W and Capucines purses. They were featured prominently in the new ad campaigns fronted by Michelle Williams and ring in at a whopping $3,380 and $4,730, respectively. Vuitton is still finding itself underperforming compared to the Célines and Givenchys of the fashion world, but LVMH execs stressed that the switchover to higher priced items is a slow and steady process. Either way, it's now going to take a lot more moola from your piggy bank to nab yourself a Louis Vuitton. (Women's Wear Daily)
Unbothered
On Ketanji Brown Jackson, ‘Making History,’ And The Expense Of Bl...
Update: Justice Ketanji Brown Jackson has been sworn in to the Supreme Court as the first Black woman sitting on the nation’s highest court. Jackson
by Brea Baker
Abortion Access For All
“A Minor Victory.” Abortion Care Resumes In Four Trigger States —...
The article is being updated as more news about temporary injunctions and restraining orders impacting abortion access comes out. It was originally publish
by Molly Longman
Abortion
Support Abortion Access With R29’s Capsule Tee Collection
As of June 24, our constitutional right to abortion no longer exists. It’s hard not to feel helpless, angry, and scared during a time like this, but for
by Elizabeth Gulino
Advertisement
Somos Latinx
I Lead An Abortion Fund in the South. My Work Just Got Harder But...
I was 16 years old when I had my first abortion. I’d been sexually assaulted and got pregnant. I told my mom that I needed an abortion and she said no. S
by Stephanie Loraine...
Abortion Access For All
9 Posters To Bring To Your Next Abortion Rights Rally
It’s official: The Supreme Court has overturned Roe v. Wade. On June 24, people started gathering to protest against the loss of our Constitutional r
by Elizabeth Gulino
Abortion Access For All
How To Access Abortion Care Post-Roe
This story has been updated to reflect the overturning of Roe v. Wade by the Supreme Court. The Supreme Court has decided to overturn Roe v. Wade, the 1973
by Molly Longman
Abortion
What Abortion Rights Will Look Like in Your State
In a 6-3 opinion, the United States Supreme Court has overturned federal protection for abortion. While the upcoming ruling was expected, it’s only the b
by Neda Toloui-Semnani
Abortion
What Will The Roe v. Wade Decision Mean For Puerto Rico?
This story has been updated to reflect the overturning of Roe v. Wade by the Supreme Court. Dr. Yari Vale Moreno is hiring an armed security guard to stand
by Raquel Reichard
Abortion
“I’m Prepared To Scream Until My Throat Is Raw.” 6 Te...
On May 1, my biggest concerns were getting ready for prom and passing my AP tests. By the next night, my priorities were drastically different. A draft opi
by Eve Thompson-Brown
Somos Latinx
Inside the Fight for Emergency Contraception in Honduras
Gente Power is a monthly Somos series profiling the Latinx activists, cultural workers, educators, and movement leaders creating change in their communitie
by Jessica Hoppe
Somos Latinx
After the Uvalde Shooting, We Need Gun Control — Not More Border ...
Less than two weeks after the mass shooting at a supermarket in Buffalo, New York, which targeted Black patrons, another senseless massacre in Texas claime
by Marjua Estevez
News
How To Help Those Affected By The Texas School Shooting
Unimaginable. The word has been used a lot in the past 24 hours to describe the horrific news that a gunman killed at least 19 children and two teachers at
by Molly Longman
Advertisement
Advertisement
Discover
R29 Stories & News
Watch
R29 Original Series & Films
Shop
R29's Most Wanted