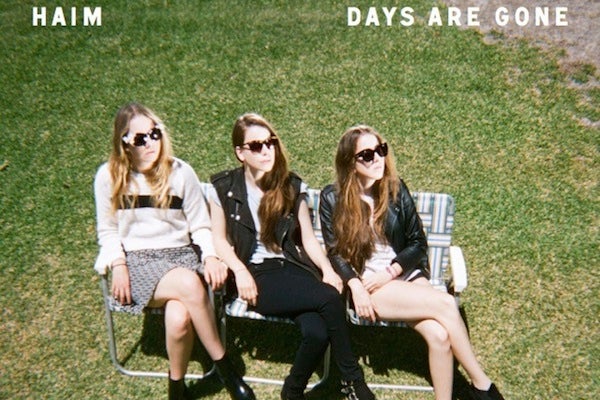 Photo: Courtesy of Columbia Records.
Last week, in a piece on the sports and culture site Grantland, Steven Hyden wrote about the current state of indie rock — or lack thereof. Specifically, he highlighted the band Haim whose fantastic new album Days Are Gone is a smash hit (it beat out Justin Timberlake to the number one spot on the charts in the U.K.) and will likely make superstars of the three L.A. sisters. (Readers of Refinery29 are already well-versed in the band's catalog of hair-care routines.)
Though often referred to as an "indie pop" band, Hyden argued that there is nothing particularly "indie" about them. He wrote, "The 'indie' modifier is instantly extraneous once you've actually heard these records — in sound and form, there's nothing that's weird, experimental, or potentially off-putting about them." He's totally right. Whereas "indie" first began as a term to describe music released on independent record labels like Sub Pop, it slowly spread to describe a style of music said to be somehow more "difficult" than mainstream tastes.
Advertisement
Listening to Haim, there's nothing about the band that isn't immediately appealing. Had its new record been released in the '80s it would have slotted in nicely between Cyndi Lauper and Pat Benatar. What's more, though Hyden only mentioned it in a footnote, is that Haim is signed to Columbia. Though plenty of majors have released experimental bands over the years, Haim is not one of them. The only "indie" thing about them is that they write their own songs. They opened for Rihanna, for Pete's sake.
During the '90s and early 2000s (and in the current wasteland of corporate radio), the term "alternative" was used to describe virtually all contemporary rock music that wasn’t explicitly heavy metal. Nickelback was deemed alternative, as was Pearl Jam, Alice In Chains, Filter, Beck, The Beastie Boys, The Foo Fighters, and 30 Seconds To Mars. If you can find a musical through-line between all those groups, you're surely smarter than this writer. Lumping together so-called "indie" artists creates a similarly confusing jumble. What do Sky Ferreira, Vampire Weekend, and Death Grips have in common? It sounds more like the setup for a joke than a legitimate question.
If we must lump all these acts together, the shared commonality is they're all consumed by a taste-conscious crowd through alternative sources (read: the internet). "Indie" is a stand-in for "critically acclaimed." But as a catch-all term applied to the plurality of current music, "indie" is weirdly dated. Don't get us wrong, the fact that high-quality acts like Haim, CHVRCHES, Solange, or Sky Ferreira exist is a great thing. Lets give them the dignity of calling them what they really are: pop.
Unbothered
Lil Nas X’s Beef With BET Runs Deeper Than A Snub
Since he first burst onto the music scene, Lil Nas X has been known to make a statement; from his viral debut “Old Town Road” to its scandalous followu
by Ineye Komonibo
Entertainment
The Villain Of My Best Friend’s Wedding Isn’...
Some will say the biggest question in the ether of the cinematic comedy-drama is if unsupportive boyfriend Nate (Adrian Grenier) or unforgiving Miranda Pri
by Emily Maskell
Unbothered
Legendary Star Leiomy Maldonado Takes Us Inside The Worl...
Imagine a place where you can be anything you want to be and fully embrace who you are — without judgment. For Black folxs and members of the LGBTQ+ comm
by Kourtney Pope
Advertisement
Unbothered
The Womack Sisters May Come From Black Music Royalty, But They...
Every June, the world comes together to honor the endless contributions that Black musicians past, present, and future make to the culture. However, for th
by Ineye Komonibo
Somos Latinx
Gordita Chronicles is The Chubby Brown Girl Coming-of-Ag...
“Gordita Chronicles” feels like a deep-cut throwback to my childhood as an awkward chubby Brown girl growing up in a Latine immigrant family during the
by Virgie Tovar
Unbothered
House Music Has BEEN Black — Beyoncé Is Just Bringing It Back
One thing about Beyoncé, she’s always going to start a conversation. This time, at the center of the discourse surrounding Queen Bey is “Break My Soul
by Niki McGloster
Music
I Went To A Charli XCX Metaverse Concert & The Future Isn’t Here Yet
“Is this purgatory?” someone asks in the Samsung Superstar Galaxy chat as a colossal, digital manifestation of English hyperpop queen Charli XCX cycles
by Kayti Burt
Unbothered
Books By Black Authors To Add To Your Summer Reading List
by R29 Unbothered
GG Good Game
Xmiramira’s Melanin Pack Revolutionized The Sims 4 — But...
“I wanted to be a damn lawyer,” laughs Amira Virgil during a recent Zoom interview. “I never thought this was a thing.” By “this,” she means a
by Ineye Komonibo
GG Good Game
Attention: Women Esports Casters & Analysts Have Entered The Chat
Last month, if you tuned into week two of the Overwatch League’s (OWL) Kickoff Clash Qualifier, you might have seen something different. And for most of
by Melissah Yang
Unbothered
Flo Milli Is “Conceited” & Not Ashamed To Say It
Flo Milli, the 22-year-old princess of rap, is back with her latest track and video for “Conceited.” Produced by Fyre, Trinidad James, and Kosine, the
by Wisdom Iheanyichukwu
Unbothered
Queen Latifah Is Rom-Com Royalty And She Should Be Treated As Such
Welcome to Love Like This?, a romance column where we, Kathleen Newman-Bremang and Ineye Komonibo, revisit some of the most romantic — or not, in hindsig
by Kathleen Newman-B...
Advertisement
Advertisement
Discover
R29 Stories & News
Watch
R29 Original Series & Films
Shop
R29's Most Wanted