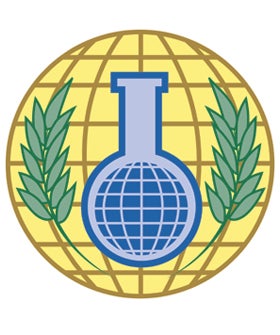 Photo: Courtesy of OPCW.
Disarmament fans, here's some heartening news. Today in Oslo, Norway, the Nobel Peace Prize was awarded to an organization dedicated to destroying chemical arms. Citing recent events in the Middle East, the Nobel committee bestowed the honor on The Organization for the Prohibition of Chemical Weapons (OPCW). The Hague-based intergovernmental body implements the Chemical Weapons Convention. Although it has been working since the 1990s, the organization recently appeared in the international spotlight when it was required to oversee the destruction of such arms in Syria. "The conventions and the work of the OPCW have defined the use of chemical weapons as a taboo under international law," the committee said in a statement.
Advertisement
The OPCW was founded in 1997 to implement the Chemical Weapons Convention, which prohibits the development, acquisition, transfer, and use of chemical weapons. It is not an agency of the United Nations, but works with it on policy issues. The OPCW conducts inspections and inventories declared weapon stockpiles. So far, 81.1 percent of the world's chemical weapons have been destroyed, according to the organization. The OPCW currently includes 189 member states, with Syria expected to join in the coming days.
Of those states, some (including the U.S.) still have declared stockpiles of weapons that have not yet been destroyed. "Certain states have not observed the deadline, which was April 2012, for destroying their chemical weapons," the committee said in its statement. "This applies especially to the USA and Russia." A report from the OPCW from earlier this year, however, said that the U.S. had destroyed 90 percent of its stockpile, and Russia had destroyed 70 percent.
It was something of a shock when the OPCW took the prize. Many had assumed would go to Malala Yousafzai, the 16-year-old Pakistani student who was wounded in an assassination attempt by the Taliban because of her advocacy work for female education. She would have been the youngest person in history to receive the prize.
The loss, however, likely won't faze the activist. Yousafzai appeared on The Daily Show Tuesday, where she earned a standing ovation and wowed Jon Stewart when telling him what she would do if she were attacked by a Taliban gunman again. "I would tell him how important education is and that I would even want education for your children as well," she said. "That's what I want to tell you, now do what you want." (NYTimes)
Juneteeth
This Juneteenth, If We Want Black Liberation, We Need Global Soli...
In 1964, after Malcolm X returned from the Palestinian territory of Gaza, he delivered a speech at a rally sponsored by the Organization for African-Americ
by Cherrell Brown
Juneteeth
When We Say ‘Abolish,’ We Mean More Than Just Police
If there’s a word that has signified the culture of resistance over the past year, it would be “abolish.” Despite always being present in U.S. histor
by Kandist Mallett
News
What Is Critical Race Theory? We Asked Some Republicans To See If...
Donald Trump may no longer be president, using his platform to spread racist rhetoric and lies about marginalized communities, but Republicans are still ca
by Erin Corbett
Advertisement
Juneteeth
White Lies My Textbooks Taught Me
“I’m sick of them telling us lies, Auntie,” my 12-year-old niece Arianna said to me one day after school, fed up with what she was learning in h
by Shirley Williams
Politics
Apparently, Megyn Kelly Supports Making Private Schools “Gr...
When the campus culture wars made their way to an elite private school in New York City, former Fox News darling Megyn Kelly could not be stopped from gett
by Erin Corbett
Unbothered
The Empty Accolade of Surviving State Violence
During their recent awards announcements, The Pulitzer Prize board surprised many people when they awarded Darnella Frazier, the teenage girl who recorded
by Hanna Phifer
Juneteeth
This Is How We Juneteenth
For many Black people, Juneteenth used to be one of those things we would try to explain to other people, without really being able to explain it. Like Hom
by Chelsea Sanders
News
Marjorie Taylor Greene Apparently Didn’t Know What The Holo...
Ideally, our elected representatives would learn about devastating events in world history sometime before they take office. And ideally, it shouldn’t ha
by Lydia Wang
News
A Viral Video Shows Maryland Police Tasing A Teenager Just For Va...
On Saturday night, 19-year-old Brian Everett Anderson, of Harrisburg, PA, was hanging out with his friends on the boardwalk in Ocean City, Maryland. What s
by Danielle Campoamor
Wellness
Please Stop Saying “Natural” When Discussing Childbirth
Yesterday during my 36-week pregnancy appointment, my doctor started to perform the standard late-pregnancy cervical exam, but she couldn’t finish it bec
by Natalie Gontcharova
News
Welcome To The Wuniverse: How Michelle Wu Became Gen Z’s Fa...
Boston mayoral candidate Michelle Wu has the youth vote. Now, she wants everyone else's vote.
by Natalie Gontcharova
News
Notorious Zoom Masturbator Isn’t Canceled After All
Jeffrey Toobin, of Zoom masturbating fame, has returned to his job as CNN’s chief legal analyst. Before getting back to work, he sat down with CNN an
by Lydia Wang
Advertisement
Advertisement
Discover
R29 Stories & News
Watch
R29 Original Series & Films
Shop
R29's Most Wanted