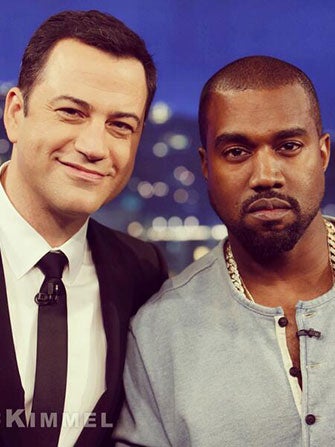 Photo: Via Jimmy Kimmel Live/Twitter
Everybody, it finally happened, and the world didn't explode. After Kanye West and Jimmy Kimmel had the most epically ridiculous feud over we-can-barely-remember-what, the two got together on live TV to hash it out. We're going to be honest: We were nervous. We're not ones for confrontation, so chances were high for serious cringing. Things certainly started out a little awkward, with the two a bit unsure of how to act around each other. They acknowledged that they let the spat get out of hand, with Kanye admitting, "We kinda just took it back to high school a little bit."
Advertisement
But, then the interview (if you could call it that, it felt more like a peer mediation session, at first) turned into the two men speaking with brutal honesty about their respective sides of the story. Jimmy explained how some people could take Kanye's er, rants, the wrong way, and Kanye gave more of his typical schtick. To be honest, we nodded off for a bit during the rapper's seemingly unending monologue (he lost us somewhere around the stories from art class). But, we came to as soon as the topic of genius came up — just in time to hear another great Kanye-ism. "I'm totally weird and I'm totally honest and I'm totally inappropriate sometimes," he said. "But, you know, for me to say I wasn't a genius, that would just be lying to you and to myself."
After the commercial break, the mood was considerably more jovial, with the two men sharing a joke about Kanye's tweets, and the true insanity of the whole feud. Jimmy even brought a peace offering — a pair of leather jogging pants for North, naturally — which gloriously led into a lengthy sermon about Kanye's role in fashion and luxury, and the barriers he runs into in his quest for sartorial domination. "Everyone just looks at you like you're crazy," he said of meetings with designers. "And, like you don't crash the Internet." We dozed off again after that (seriously guys, this show's on late), and then all of a sudden the performer was threatening us with the reminder that he's hard, saying, "Never think that I'm not from Chicago for one second." Don't ask us how his thought process got him there, because even after we rewinded our DVRs several times, we were still as lost as ever.
All in all, we have to say this was the most entertaining — if not completely perplexing — half-hour of TV we've seen in awhile. Seriously, who needs the drama of Scandal when we can just play the Kanye interview on repeat? (We didn't really mean that, Olivia!) Say what you will about Kanye's complete overzealousness, but it was almost refreshing to hear him wax on (and on and on) about literally every single one of his feelings that he's ever felt. There's no faking it with this guy, and that's something we can appreciate. See for yourself below, and let us know what you think of the spectacle in the comments.
Advertisement
Entertainment News
B. Smith, Groundbreaking Model and Entrepreneur, Is Dead At 70
Barbara “B.” Smith, a model, restaurateur, and lifestyle guru previously dubbed the “Black Martha Stewart,” has died at the age of 70. Smit
by Alexis Reliford
Entertainment
Amanda Bynes Plans To Challenge Her Conservatorship In Court
Amanda Bynes says she is planning to challenge her long-standing conservatorship over expensive restrictions on her mental health treatment. Bynes shared a
by Sarah Midkiff
Entertainment
20-Year-Old Rapper Pop Smoke Killed During Hollywood Home Invasion
The global hip hop community is mourning yet another loss after learning of the death of newbie rapper Pop Smoke (real name Bashar Barakah Jackson).
by Ineye Komonibo
Entertainment News
Queen Of Katwe Star Nikita Pearl Waligwa Is Dead At 15
Nikita Pearl Waligwa, the young Ugandan actress who starred in the 2016 Disney film Queen of Katwe, has died of a brain tumor. She was 15 years old. Queen
by Alejandra Salazar
Celebrity Couples
Bachelor In Paradise’s Krystal Nelson & Chris Randone Spli...
Paradise has officially come to an end for one Bachelor in Paradise couple. Krystal Nielson and Chris Randone, who met and got engaged during season 5 of t
by Alexis Reliford
Entertainment News
Former Love Island Host Caroline Flack Is Dead At 40
Caroline Flack, the former host of the U.K.’s Love Island, has died, her family has confirmed. She was 40. “We can confirm that our Caroline passed awa
by Ashley Chervinski
Oscars
The Oscars Used Black People As Props & It’s Not What We’re Here For
The Oscars don’t always fall during Black History Month, but in 2020, they did. Janelle Monae opened the 92nd Academy Awards with a jazzy song-and-dance
by Kathleen Newman-B...
Entertainment
Gayle King Is “Mortified” By Edited Kobe Bryant Quest...
On Tuesday, Gayle King sat down with WNBA superstar Lisa Leslie to discuss the basketball player’s relationship with the late Kobe Bryant. Bryant, who wa
by Ineye Komonibo
Sundance Film Festival
The Planned Parenthood Projects That Demanded Attention At Sundance
Park City was hit with a storm of pink during Sundance Film Festival’s opening weekend, as Planned Parenthood arrived on the mountain with two film proje
by Fiona Hillery
Entertainment News
Pamela Anderson & Her New Husband Are Calling It Quits After Just...
Think you had an eventful start to the decade? You probably have nothing on Pamela Anderson and Jon Peters, who married in a secret Malibu wedding just ove
by Lydia Wang
Entertainment
Lori Loughlin & Mossimo Giannulli Didn’t Think They Were Making B...
Lori Loughlin and Mossimo Giannulli have filed new court documents asserting that newly-disclosed evidence further proves their innocence in the college ad
by Alejandra Salazar
Pop Culture
Kobe Bryant’s Family Asks For Privacy In New Statement
Following the death of Kobe and Gianna Bryant on Sunday, January 26, the Bryant family has issued a statement through their representative calling for priv
by Kaitlin Reilly
Discover
R29 Stories & News
Watch
R29 Original Series & Films
Shop
R29's Most Wanted