Skip navigation!
Story from Food & Drinks
Had your fill of cronuts? Eaten all the townies money can buy? Then you might favor a duffin. What's that, you say? It's a muffin-doughnut mix, and right now this delicacy is coming with a side order of bile, courtesy of the fight breaking out between Bea Vo, founder of Bea's Bloomsbury bakery and Starbucks.
Vo claims that for over two years, she has been selling this pastry through her four bakeries in London. Last week, Starbucks introduced this treat to all of its 760 outlets using the same ingredients, even going so far as to trademark the name in the U.K. As Vo points out to The Independent: "Of course the concept of the doughnut/muffin has been around online for a few years, but this version with nutmeg is my particular take on it. I don't mind if Starbucks chooses to create a crappy version of my duffin, but don't trademark it, which gives you the legal right to prevent anyone else using the name duffin, especially the people who used it for two years before you."
Advertisement
A spokesperson for Starbucks issued a statement, as well: "Since launching, we have discovered there are other duffins out there in the U.K., including at Bea's of Bloomsbury…however we'd like to make it clear that neither Starbucks nor Rich's Products has suggested to Bea's of Bloomsbury that they will attempt to stop them selling their own duffins." While Vo remains to be assured of this fact, we can't help but think that we may need to sample the "evidence" as soon as possible. Who's up for a trip to the bakery this weekend? (The Independent)

Photo: Via The Independent. 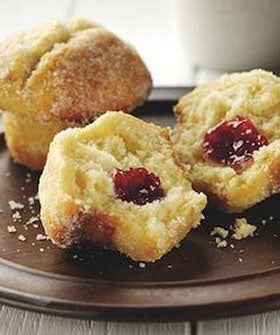 Advertisement
Food & Drinks
6 Chefs Share What They’re Most Excited About In 2020
by Christina Dun
Food & Drinks
What To Drink While Mercury Is In Retrograde, According To Your Sign
This year has only just begun and already we’ve hit our first roadblock, Mercury is in freaking retrograde again. This is the first of three times Me
by Hannah Rimm
Food & Drinks
Be Our Chef Is The Cooking Competition Show For The Ul...
Disney+‘s newest show is like Great British Bake Off-meets-Food Network Challenge, except it’s all Disney, and it’s hosted by The Office?
by Michelle Santiago...
Food & Drinks
Where To Buy King Cakes Ahead Of Mardi Gras
by Olivia Harrison
Food & Drinks
Trader Joe’s Drops New Everything But The Elote Seasoning B...
Corn just means more to certain people. You know who I’m talking about. There is at least one person in your life that could happily house four ears of c
by Michelle Santiago...
Food & Drinks
Häagen-Dazs Kicks Off Rosé Season Early With Its Newest Boozy Ice...
Rosé lovers rejoice!  No longer do you have to choose between indulging in a glass of pink wine or a bowl of ice cream. Doing the work of food angels
by Alexis Reliford
Food & Drinks
These Valentine’s Day Food Deals Will Make Your Heart (& Be...
Love is in the air and even those too cynical for a little V-day cheer can indulge this fine Friday. Whether you’re planning to go full flowers-chocolate
by Hannah Rimm
Guide To Wine
13 Wine Memes To Make Every Type Of Wine Lover LOL On National Dr...
Ah, wine. So many of us are big fans of the beverage. Despite its widespread appeal, however, there are many different ways to love it. Some people take th
by Olivia Harrison
Food & Drinks
Where To Find A Heart-Shaped Pizza To Fill Your Stomach This Vale...
Whether you’re happy or sad, in love or heartbroken, pizza is always there to celebrate and console. Nothing is more comforting than oven-baked carbs and
by Michelle Santiago...
Guide To Wine
The Best Under $20 Wines To Cheers With This Valentine’s Da...
by Olivia Harrison
Starbucks
Starbucks Happy Hour Is Back – Buy A Drink & Get One For Your Cru...
Roses are red and violets are blue. None of that matters because we have good news for you. You have plans for lunch today and they include a stop at Starb
by Michelle Santiago...
Trader Joe's
The Best Trader Joe’s Chocolate Treats, For Valentine’...
by Michelle Santiago...
Discover
R29 Stories & News
Watch
R29 Original Series & Films
Shop
R29's Most Wanted