Skip navigation!
Story from Tech
There’s no circumventing the chatter that surrounds the women-working-in-the-tech-field convo, and in an age where female CEOs and engineers are making major waves, people are definitely raising an eyebrow or two at the lack of females on Twitter’s board. And, you'd think there would be no qualms about that argument, but guess again.
Well, according to Gawker, PandoDaily founder Sarah Lacy has some choice words for those people speaking up about the issue and has taken what some may perceive as a ride in a big fat time machine and penned an open letter to Twitter’s "mob" (or in her words the “people who literally wake up everyday looking for a women’s issue to be outraged about”) about their misguided gender conflict and banging the “sexism” drum. While we can't say we agree with her on all fronts, we do have to agree that her point of hiring a woman for the sake, of well, just hiring a woman isn't okay — so maybe she's onto something? Either way, the rhetoric she uses to make her point can be problematic at times, too. Take a looksee at the full piece and weigh in on it below. We have to warn you…your blood will boil, but take a sec to pull back all layers of the debate and hear her out. 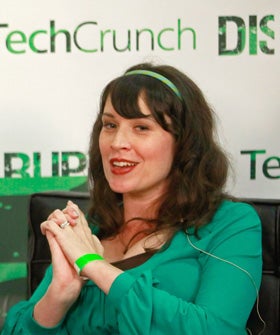 Photo: Via Gawker
Sustainability
Real People Share Their Favorite Reusable Water Bottle Brands
by Angela Tafoya
San Francisco
S.F.'s Best Cheap-Eats Spots (& What To Order)
by Lauren Sloss
Tech
8 Young Professionals Share Their Work Secrets
The tech industry is growing at a head-snapping pace, with a pool of talent that includes some of the world’s brightest innovators, movers, and shake
by Angela Tafoya
Hair
4 DIY Hairstyles That Take Unwashed Hair To The Next Level
In a dream world, we would all roll out of bed with perfectly imperfect hair. You know, like the stuff you see in rom-coms and on Kate Moss. But, let’s b
by Katie Nash
Work & Money
This Entire Company Got Totally Naked For April Fools’ Day ...
by Angela Tafoya
Books & Art
This Artist Endured 8 Hours Of Catcalling To Fight Sexual Harassment
by Natasha Young
San Francisco
What It’s REALLY Like To Be A San Francisco Barista
by Kelly Anne Bonner
San Francisco
Farm-To-Table Weed Exists — & It Comes In A Mason Jar
I get a text message alerting me that my marijuana delivery will be at my apartment in four minutes. “You can track your driver by clicking this link
by Matthew Latkiewicz
San Francisco
10 NSFW Moments From The World’s Biggest Leather Event
by Michele Bird
San Francisco
15 Chic Styles You’ll Want From Everlane Now
by Michele Bird
San Francisco
The 15 Most Beautiful Spots In San Francisco
by Michele Bird
Home
This San Francisco Home Has The Most Beautiful Travel Souvenirs
by Homepolish
Discover
R29 Stories & News
Watch
R29 Original Series & Films
Shop
R29's Most Wanted