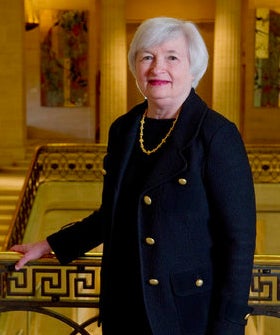 Photo: Via The New York Times.
Welcome to the new Federal Reserve. White House officials announced last night that President Obama will nominate Janet Yellen as the chairman of the Fed later today. The announcement is expected to come at 3 p.m. this afternoon. The 67-year-old current vice chair, if confirmed, would be the first female leader of the central bank in history. But there's more to her than just her gender, which is not at all insignificant. Here's what you need to know.

Who Is She?
Yellen's served as vice chair of the Fed since 2010, when she was easily confirmed by voice vote in the Senate. A native of Brooklyn, she has also served as the president and CEO of the Federal Reserve Bank of San Francisco and the chair of the White House Council of Economic Advisers under President Clinton, and is professor emerita at the U.C. Berkeley's Haas School of Business. She's married to George Akerlof, a Nobel prize-winning economist who is also a professor emeritus at Berkeley. Yellen also collects stamps, enjoys tennis and hiking, and packs suitcases full of economics books to read on vacation. Seriously.

Why Her?
As the New York Times notes, Yellen is expected to win bipartisan support in the Senate, though some Republicans, such as Sen. Bob Corker of Tennessee, are wary of her nomination because of "her dovish views on monetary policy." (More on that below.) Both she and current Fed chairman Ben Bernanke have engineered our current expansionary monetary policy — i.e., the stimulus that was re-upped last month — though as chairman she will be expected to wind down that program so that the economy can walk on its own legs, so to speak.

While her approach to the economy isn't wildly different than Bernanke's, her sensibility is. (More on that, too.) But she was, for a time, the underdog candidate to Larry Summers, a former Obama advisor who dropped out of the running last month after pressure from Democrats, who see Yellen's appointment as both historic for women and important for job creation.

What Does "Dovish" Mean?
Yellen and Bernanke are often referred to as "doves" or "dovish" in their policy approaches. In Fed-speak, that basically means that, when considering how to balance the Fed's dual mandate of full employment and low inflation levels, Yellen and her ilk tend to focus more on jobs. Hawks, on the other hand, focus more on inflation. Since the Fed cannot equally balance both needs — if it stimulates the economy by printing money and creating jobs, it risks raising inflation — they have to choose sides. The doves are generally willing to risk small raises in inflation if it lowers unemployment, while the hawks typically want to keep price levels stable with higher interest rates.

Justin Wolfer at Bloomberg, however, doesn't characterize Yellen as a dove. "While it’s true that Yellen has forcefully advocated for more monetary stimulus in recent years, what’s more notable is that she has gotten the big calls right. Those who argued for tighter monetary policy have been proven wrong," he writes. "Yellen’s pragmatic reading of the macroeconomic tea leaves has led her to avoid the errors of her theory-bound colleagues who have seen the threat of inflation around every corner." Basically, he means Yellen isn't looking at the issues facing the Fed as simple number sets or statistics. Kevin Roose at New York magazine calls her approach a "humanist" one, in which she approaches the economy "as a moving, breathing organism, a collection of millions of people who are struggling to make their lives better today than they were yesterday."

About Her "Chairman" Title
That's not a typo. As Roose points out, the title is clearly spelled out in the Federal Reserve Act, gender-appropriate awkwardness notwithstanding. That doesn't mean, of course, that things won't change. But for now, we'll stick to just "chair" in the future.

News
After Voting No On The $15 Minimum Wage, Sen. Kyrsten Sinema Had ...
On Friday, the U.S. Senate voted against Sen. Bernie Sanders’ proposal to raise the national minimum wage from $7.25 to $15. One of the votes that helped
by Elly Belle
News
Bernie Sanders Wants Us To Start Dating Again
Bernie Sanders has been hard at work fighting for workers rights, among other things. On Friday morning, Sanders proposed an amendment to the $2 trillion C
by Elly Belle
News
Rudy Giuliani’s Daughter Caroline Explains How Polyamory Ha...
On Thursday, Caroline Giuliani, the daughter of defamed Trump lawyer Rudy Giuliani, shared her experience with polyamory and monogamy. In an essay for Vani
by Elly Belle
Meghan Markle
For No Reason At All, Here’s A Reminder That Prince Andrew ...
Meghan Markle is speaking openly about her experiences with the royal family in a sit-down interview with Oprah Winfrey that will air on Sunday. In a previ
by Erin Corbett
News
Republicans Are Now Criticizing Biden For Calling Speaker Pelosi ...
Lately, the GOP has had a lot of pressing issues to complain about: Dr. Seuss, Potato Head, and now, President Joe Biden’s choice nickname for House Spea
by Lydia Wang
News
March 4th Is Just Another Day, Right? Not If You’re In QAnon
Donald Trump is out of office and at least 13 QAnon believers have been arrested following their planned attack on the U.S. Capitol. The so-called “Great
by Lydia Wang
News
Will Everyone Be Able To Get Vaccinated By May?
President Joe Biden announced on Tuesday that the United States is “on track” to produce enough vaccines for every adult in the country by the
by Sarah Midkiff
News
Texas Deserves Better
On Tuesday, Texas Gov. Greg Abbott announced that the state’s COVID-19 restrictions —including a mask mandate and limited capacity at restaurants ?
by Lydia Wang
News
Kayleigh McEnany Will Feel Right At Home In Her New Job At...
Former White House Press Secretary. Harvard Law JD. Compulsive liar. Now, Kayleigh McEnany can add “Fox News contributor” to her Twitter bio. On Tuesda
by Natalie Gontcharova
News
Cuomo Should Be Held Accountable By His Own Party — & So Should T...
On Monday, a second former aide to New York Governor Andrew Cuomo accused him of sexual harassment, making for a total of three women to come forward so fa
by Sarah Midkiff
News
Why Are So Many People Upset About Elizabeth Warren’s Milli...
In one of her first moves as a new member of the Senate Finance Committee, Sen. Elizabeth Warren unveiled legislation this week that would introduce a tax
by Sarah Midkiff
News
What To Know About The Shooting In An Arkansas Junior High School
On Monday, the first day in-person learning restarted in Arkansas, one student was injured during a shooting at Watson Chapel Junior High School in Pine Bl
by Asia Ewart
Discover
R29 Stories & News
Watch
R29 Original Series & Films
Shop
R29's Most Wanted