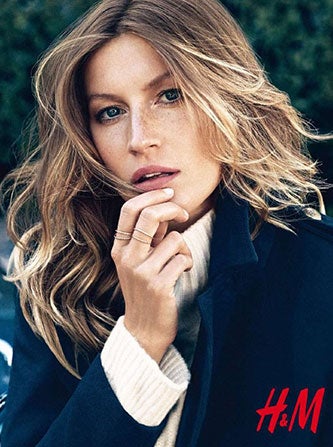 Photo: Courtesy of H&M.
To many, making $1.5 million in a year would be akin to hitting the jackpot. But, in the modeling industry, especially the female-modeling industry, it's chump change. Gisele Bündchen brought home a casual $42 million this past year ($4 million more than her NFL hubby), and continued her reign as the highest paid model for the seventh year.
Forbes released its list of male-model earnings in 2013 with Sean O'Pry topping the list at $1.5 million. Both he and Bündchen appeared in H&M's fall 2013 campaigns, but it was Bündchen's stack of Benjamins that cast a shadow over O'Pry's. In fact, his yearly earnings don't even break into the top-tax bracket of his female counterparts. Miranda Kerr is the world's second highest paid model, with a hefty $7 million. In the business of being, to quote Zoolander, "professionally good looking," women are estimated to make 148% more than men. It is perhaps the only industry where women reign.
There's a pretty hefty feminist dialogue brewing in these figures. Yes, it's awesome women make more, but they're making more based on image and objectification. On the flip side, women have more options for a career post-modeling (read: Naomi Campbell's TV shows, Lauren Hutton's activism, Brook Shields' acting career). It's a give and take, but in the meantime, let's hear it for the ladies. (The Telegraph)
News
After Voting No On The $15 Minimum Wage, Sen. Kyrsten Sinema Had ...
On Friday, the U.S. Senate voted against Sen. Bernie Sanders’ proposal to raise the national minimum wage from $7.25 to $15. One of the votes that helped
by Elly Belle
News
Bernie Sanders Wants Us To Start Dating Again
Bernie Sanders has been hard at work fighting for workers rights, among other things. On Friday morning, Sanders proposed an amendment to the $2 trillion C
by Elly Belle
News
Rudy Giuliani’s Daughter Caroline Explains How Polyamory Ha...
On Thursday, Caroline Giuliani, the daughter of defamed Trump lawyer Rudy Giuliani, shared her experience with polyamory and monogamy. In an essay for Vani
by Elly Belle
Meghan Markle
For No Reason At All, Here’s A Reminder That Prince Andrew ...
Meghan Markle is speaking openly about her experiences with the royal family in a sit-down interview with Oprah Winfrey that will air on Sunday. In a previ
by Erin Corbett
News
Republicans Are Now Criticizing Biden For Calling Speaker Pelosi ...
Lately, the GOP has had a lot of pressing issues to complain about: Dr. Seuss, Potato Head, and now, President Joe Biden’s choice nickname for House Spea
by Lydia Wang
News
March 4th Is Just Another Day, Right? Not If You’re In QAnon
Donald Trump is out of office and at least 13 QAnon believers have been arrested following their planned attack on the U.S. Capitol. The so-called “Great
by Lydia Wang
News
Will Everyone Be Able To Get Vaccinated By May?
President Joe Biden announced on Tuesday that the United States is “on track” to produce enough vaccines for every adult in the country by the
by Sarah Midkiff
News
Texas Deserves Better
On Tuesday, Texas Gov. Greg Abbott announced that the state’s COVID-19 restrictions —including a mask mandate and limited capacity at restaurants ?
by Lydia Wang
News
Kayleigh McEnany Will Feel Right At Home In Her New Job At...
Former White House Press Secretary. Harvard Law JD. Compulsive liar. Now, Kayleigh McEnany can add “Fox News contributor” to her Twitter bio. On Tuesda
by Natalie Gontcharova
News
Cuomo Should Be Held Accountable By His Own Party — & So Should T...
On Monday, a second former aide to New York Governor Andrew Cuomo accused him of sexual harassment, making for a total of three women to come forward so fa
by Sarah Midkiff
News
Why Are So Many People Upset About Elizabeth Warren’s Milli...
In one of her first moves as a new member of the Senate Finance Committee, Sen. Elizabeth Warren unveiled legislation this week that would introduce a tax
by Sarah Midkiff
News
What To Know About The Shooting In An Arkansas Junior High School
On Monday, the first day in-person learning restarted in Arkansas, one student was injured during a shooting at Watson Chapel Junior High School in Pine Bl
by Asia Ewart
Discover
R29 Stories & News
Watch
R29 Original Series & Films
Shop
R29's Most Wanted