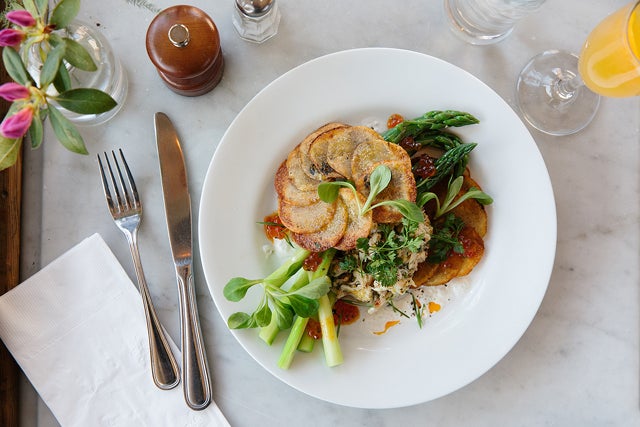 Photographed by Alice Gao.
Sure, we all complain about the ubiquity of food porn in our social streams. But now, we've got good reason to either rejoice or avoid the pixelated poultry until after our dinners: The "Instagram diet" is officially a real, scientific thing.
Scientists found that staring at virtual nourishment actually makes our IRL food taste...worse. Yes, worse. In a study conducted at Brigham Young University, people were given pictures of either sweet or salty foods to look at, then offered peanuts to eat and asked to rank them based on enjoyment factor. Even though the salty-picture crew hadn't been shown pics of peanuts, the fact that they had looked at salty foods apparently diminished their appreciation of the nuts. They ranked them as less enjoyable than did the people who had been viewing cakes and cookies.
"In a way, you’re becoming tired of that taste without even eating the food," co-author Ryan Elder said in a statement. Sad. So, the next time you're headed out for a decadent dinner, you might want to skip all the Instagramming beforehand — it might make your food taste disappointingly boring. (The Salt Lake Tribune)
Gift Guides
13 Gifts Any Health Nut You Know Will Go, Well, Nuts Over
by Karina Hoshikawa
Dedicated Feature
This Is Why “Wellness Teas” Have Grown So Popular In ...
There are a handful of remedies that seemingly have the power to abate — or at least provide comfort in the face of — nearly any problem at hand. A nic
by Rebecca Deczynski
Healthy Snacks
The Healthy Snacks To Have In Your Pantry For Late-Night Munchies
by Cory Stieg
Diet & Nutrition
The Best Milk Alternatives For A Non-Dairy Swap
by Karina Hoshikawa
Wellness
What To Know About “Immune Boosters” Before Trying Them
by Karina Hoshikawa
Guide To Wine
A Doctor’s Tips On Choosing Healthier Wines
by Karina Hoshikawa
Pets
Everything To Know About Those Pet CBD Products
*Jerry Seinfeld voice* What’s the deal with CBD for pets? Sure, you yourself might dabble in the wellness supplement every now and again, but what ab
by Karina Hoshikawa
Wellness
8 Eco-Friendly Water Bottles To Help You Stay Hydrated
by Karina Hoshikawa
Diet & Nutrition
Should You Get An Online Nutritionist?
Seeing medical professionals through your phone has gone from being a futuristic fantasy to kind of the norm. If you haven’t had a virtual visit to f
by Elizabeth Gulino
Healthy Lifestyle Tips
7 Foods To Eat When You Really Can’t Afford To Get Sick
by Elizabeth Gulino
Wellness
Why You Wake Up Sweaty After Drinking
So you went a little too hard last night, and now you’re waking up to the sweet smell of a hangover. Surprisingly, there’s something even worse
by Molly Longman
Body
Does The Keto Diet Really Make You Smell?
Even though it was named one of the worst health trends of 2019, the keto diet is still (somehow) going strong. The low-carb, high-fat, high-protein eating
by Elizabeth Gulino
Discover
R29 Stories & News
Watch
R29 Original Series & Films
Shop
R29's Most Wanted