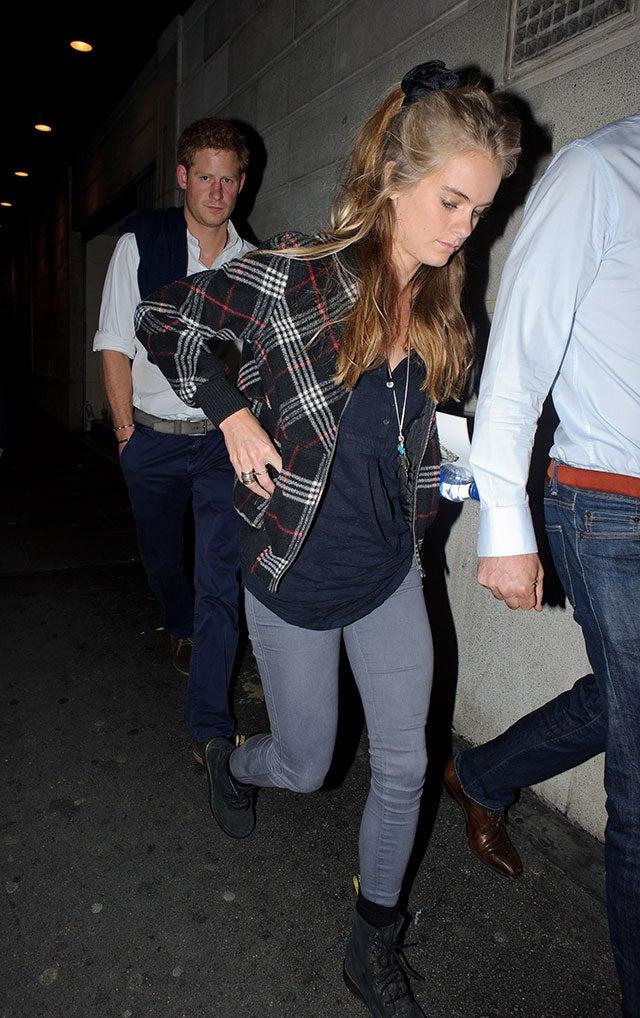 Stop the presses, alert the media, pour one out: Prince Harry might be getting engaged. That's what some fairly credible(-ish) reports are suggesting, though the palace has not yet provided confirmation. News broke yesterday that the little prince is planning on asking Cressida Bonas for her hand in marriage.
The Telegraph
reports that, according to a friend of hers, "Cressida is going to marry Harry." A pal of Harry's came forward to back up the statement saying, "Harry never stops talking about marriage and children, and she has now got used to the idea." He went on to boldly lay claim that, "The wedding is likely to take place next year."

Ladbrokes, an online betting website, reports that 8 out of 11 people believe the couple will be engaged before the year is out (because apparently people bet on these sorts of things). People are also under the belief that the wedding will take place sometime in 2015. Jessica Bridge, Ladbrokes' PR executive told People: "The more the couple are pictured together, the more punters are parting ways with their cash over Prince Harry popping the question this year."
With no official news yet, the time for celebration will have to wait. Stay tuned, though! We reached out to the palace for comment, and we'll update when we hear back. (People)
Advertisement
Entertainment News
Queen Of Katwe Star Nikita Pearl Waligwa Is Dead At 15
Nikita Pearl Waligwa, the young Ugandan actress who starred in the 2016 Disney film Queen of Katwe, has died of a brain tumor. She was 15 years old. Queen
by Alejandra Salazar
Celebrity Couples
Bachelor In Paradise’s Krystal Nelson & Chris Randone Spli...
Paradise has officially come to an end for one Bachelor in Paradise couple. Krystal Nielson and Chris Randone, who met and got engaged during season 5 of t
by Alexis Reliford
Entertainment News
Former Love Island Host Caroline Flack Is Dead At 40
Caroline Flack, the former host of the U.K.’s Love Island, has died, her family has confirmed. She was 40. “We can confirm that our Caroline passed awa
by Ashley Chervinski
Oscars
The Oscars Used Black People As Props & It’s Not What We’re Here For
The Oscars don’t always fall during Black History Month, but in 2020, they did. Janelle Monae opened the 92nd Academy Awards with a jazzy song-and-dance
by Kathleen Newman-B...
Entertainment
Gayle King Is “Mortified” By Edited Kobe Bryant Quest...
On Tuesday, Gayle King sat down with WNBA superstar Lisa Leslie to discuss the basketball player’s relationship with the late Kobe Bryant. Bryant, who wa
by Ineye Komonibo
Sundance Film Festival
The Planned Parenthood Projects That Demanded Attention At Sundance
Park City was hit with a storm of pink during Sundance Film Festival’s opening weekend, as Planned Parenthood arrived on the mountain with two film proje
by Fiona Hillery
Entertainment News
Pamela Anderson & Her New Husband Are Calling It Quits After Just...
Think you had an eventful start to the decade? You probably have nothing on Pamela Anderson and Jon Peters, who married in a secret Malibu wedding just ove
by Lydia Wang
Entertainment
Lori Loughlin & Mossimo Giannulli Didn’t Think They Were Making B...
Lori Loughlin and Mossimo Giannulli have filed new court documents asserting that newly-disclosed evidence further proves their innocence in the college ad
by Alejandra Salazar
Pop Culture
Kobe Bryant’s Family Asks For Privacy In New Statement
Following the death of Kobe and Gianna Bryant on Sunday, January 26, the Bryant family has issued a statement through their representative calling for priv
by Kaitlin Reilly
Entertainment News
Ellen Pompeo Fiercely Calls Out TMZ & Harvey Levin For Breaking K...
Early Sunday afternoon, tabloid news website TMZ shared one of its most shocking headlines ever, announcing the sudden death of NBA icon Kobe Bryant. Bryan
by Ineye Komonibo
Entertainment News
Nicki Minaj’s Brother Sentenced To 25 Years To Life In Pris...
Two years after being convicted of the sexual assault of a child in the state of New York, Nicki Minaj’s older brother Jelani Maraj has ju
by Ineye Komonibo
Entertainment
Kobe Bryant, Former NBA Star, & Daughter Killed In Helicopter Crash
Former NBA player Kobe Bryant has died following a helicopter crash in Calabasas, CA. The Los Angeles Times reported that a helicopter crashed into a hills
by Courtney E. Smith
Discover
R29 Stories & News
Watch
R29 Original Series & Films
Shop
R29's Most Wanted