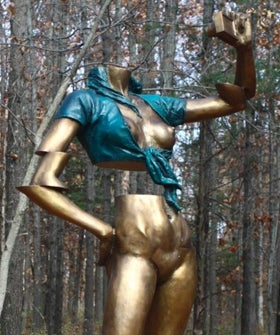 Photo: Via Huffington Post.
Another day, another ridiculous controversy over a woman's body. This time, that woman is actually a headless, bisected sculpture. She lives in a park near Overland Park, KS, and some of her neighbors aren't very welcoming. The scandal isn't especially new — residents began calling for the removal of the statue by artist Yu Chang last summer. When the park refused to cede to demands, a religious group started gathering signatures to convene a grand jury in the hopes of having the statue deemed "harmful to minors."
The American Family Association (AFA) of Kansas and Missouri insists the statue of the nude woman photographing herself, titled Accept or Reject, promotes sexting. Say, what now? In a comment on Watchdog.org, AFA director Phillip Cosby asked, "Why is a city agency putting in front of children an act, that if they mimicked, would be the illegal manufacture of child porn by children?" This isn't Cosby's first go-around with the statue. Last year, he mounted a failed campaign to have it removed — at a cost of $35,000 to taxpayers. This time, he promises to have the district attorney investigated for obstruction of justice and witness-tampering for "hijacking" the first case. Curiouser and curiouser.
The statue's story itself is strange, too. It's actually a gift from China to the U.S., supposedly to commemorate the presence of Chinese immigrants in America. And the artist, Yu, is the president of Guangzhou Sculpture Academy (where a giant statue of Kobe Bryant stands outside to greet visitors) and is the first of six Chinese sculptors taking part in an initiative to bring international artworks to Overland Park.
What's ultimately troubling, though, is that both art and women's bodies are still considered "obscene" by some in the West. But can we suggest that this sculpture sans head is, in fact, problematic? Casual decapitation is a strange, misogynistic thread that runs through much of popular image-making and plenty of contemporary art, too. Without heads, women become objects, disembodied sex parts, playthings, and commodities. You could argue that Yu is making a statement about how nude selfies strip the subject of identity, or that the photographic process is one of violence — hey-o, Susan Sontag! — but it turns out that Yu just doesn't like giving his sculptures heads. Disappointing, but not obscene. (HuffPo)
Somos Libres
How Republicans & Democrats Weaponize Latinx Trauma to Get Votes
Daniela Ferrera had stopped at a red light on October 11, 2020, in the Miami neighborhood of Westchester, where a pro-Joe Biden caravan was making its way
by Raquel Reichard
Somos Libres
Haiti Aided Latin American Independence Movements; Latinxs Are Re...
In 1815, Spain’s defeat of Simón Bolívar’s revolutionary army in Venezuela nearly extinguished the dream of independence in South America. After the
by France Francois
Somos Libres
My Father Was Forced to Flee His Country; That’s Exactly Why I Pr...
Like many first-generation Latinx people living in the United States, I grew up hearing stories of liberation movements, government brutality, extreme poli
by Lola Méndez
Advertisement
Somos Libres
Loverbar Was A Safe Space For Queer Puerto Ricans; That’s Exactly...
"It would be irresponsible of me to call it a safe space. But I will try my fucking damnest every single day to make it as safe as possible.”
by Mercedes Viera
Somos Libres
The Word “Latinx” IS A Betrayal To Latinidad. That’s Exactly The ...
Latinx is a betrayal. It’s an attack. It’s a butchering of Spanish. And that's why I use it.
by J. A. O.
Work & Money
The Pandemic Exposed The Lie Of Women’s Equality. Where Do ...
As many women face increasing pressures from work and home, activists and experts urge federal action
by Jana Cholakovska
Coronavirus
The FDA Has Officially Approved Pfizer’s COVID Vaccine. Wil...
Update: On Monday, August 23, the FDA approved the Pfizer/BioNTech COVID-19 vaccine, making it the first officially licensed vaccine against the coronaviru
by Danielle Campoamor
Unbothered
Civil Rights Legend Lucille Times Dies At 100, Leaving A Lasting ...
Lucille Times, a  Montgomery civil rights activist who got into a fist fight with the same bus driver Rosa Parks stood up to, passed away late Monday even
by Tayo Bero
News
Apparently, Giving Money To People Reduces Poverty & Hunger. Who ...
As it turns out, there’s an easy, straightforward way to reduce the endemic poverty and hunger in America: money. According to new data from the U.S.
by Lydia Wang
News
A Lot Of People Bought Cuomosexual Merch In 2020. What Happens To...
On Tuesday, New York Governor Andrew Cuomo announced his resignation amid a slew of allegations and scandals. Along with ongoing investigations into whethe
by Lydia Wang
Climate
New Climate Change Report Confirms: Everything’s Terrible, ...
A major United Nations (UN) scientific report has concluded what any sentient being has long known to be true: Global warming is not only real, it is getti
by Danielle Campoamor
News
Should Wealthy Countries Give COVID Booster Shots When Other Coun...
On Wednesday, the World Health Organization called for a moratorium on wealthy nations distributing COVID-19 booster shots to already vaccinated people, du
by Erin Corbett
Advertisement
Advertisement
Discover
R29 Stories & News
Watch
R29 Original Series & Films
Shop
R29's Most Wanted