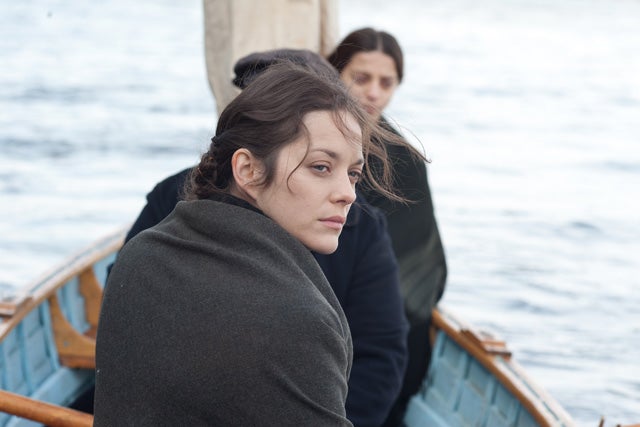 Photo: Courtesy of The Weinstein Company
You might be shocked to hear it, but apparently not everyone is as obsessed with Marion Cotillard as we are. In fact, there are some people who haven't even heard of the actress-slash-Dior muse, even in Hollywood. James Gray, the director of her upcoming period piece The Immigrant, recently admitted to being in the dark about the actress before her casting. But, he soon wised up to her mesmerizing ways, in a turn of events that you won't believe.
"I have three young children so I'm a little bit out of touch with movies right now and I didn't know who Cotillard was," Gray said at The Immigrant's New York Film Festival screening. "I had become friendly with her boyfriend and we all went out to dinner, and we started arguing about an actor who she loved and I thought was overrated, and she threw a piece of bread at my head." While that might not be typical dinner decorum, the move only served to show off Cotillard's admirable self-assurance. "The minute she mentioned that she thought I was a jerk, I immediately liked her as a result," he said. "So I wrote the movie for her."
Luckily for everyone involved, it ended up being just the right move — Cotillard wooed Gray just as she does audiences in the movie. "I thought she had a great face, and I'm not just talking about being beautiful which she is, but it's almost like a silent film actress," said Gray. "She's very intelligent, and she's very intuitive in that way, and I loved working with her."
Of course, we're not advocating starting a food fight at your next dinner party, but we get a huge kick out of Cotillard's pluck. For such a traditionally sophisticated woman, she sure packs the punch in the personality department. And we have to admit, it makes for a great story.
Entertainment
That Family Is Trying To Finesse The System — Again
Just weeks after Lori Loughlin’s brief stint behind bars for her involvement in Operation Varsity Blues came to an end, the Fuller House actress’ husba
by Ineye Komonibo
Entertainment News
FKA Twigs’ Lawsuit Against Shia LaBeouf Is Far From His First
Shia LaBeouf is at the center of a new disturbing lawsuit accusing him of domestic abuse towards his ex-girlfriend FKA twigs (real name Tahliah Debrett Bar
by Ineye Komonibo
Entertainment News
FKA Twigs Sues Shia LaBeouf Over Abusive Relationship
Art pop singer FKA twigs (real name Tahliah Debrett Barnett) is breaking her silence about the tumultuous nature of her relationship with Shia LaBeouf, all
by Ineye Komonibo
Entertainment News
Natalie Desselle Reid Of Cinderella & B*A*P*S F...
Natalie Desselle Reid, the comedic actress known for roles in the Brandy-led version of Rodgers & Hammerstein’s Cinderella and UPN sitcom Eve has die
by Natalie Morin
Meghan Markle
We Just Got Two Major Updates About Meghan Markle’s Lawsuit...
New developments in Meghan Markle’s ongoing lawsuit against Mail on Sunday have surfaced, further complicating the Duchess’ previous testimony and impa
by Ineye Komonibo
Documentary
Cheer‘s Jerry Harris Has Been Arrested & Charged W...
Update Sept. 17, 2020: Jerry Harris of the Emmy-nominated Netflix show Cheer has been arrested and charged with the production of child pornography. Accord
by Natalie Morin
Entertainment News
Migos’ Takeoff Denies Sexual Assault Allegations In New Sta...
Updated August 6, 2020: Takeoff has denied the accusations of rape made against him, calling the allegation “patently and provably false.” In a
by Ineye Komonibo
Pop Culture
Frank Ocean’s Younger Brother Ryan Breaux Killed In Car Acc...
Update August 6, 2020: Ryan Breaux’s mother, Katonya Breaux, publicly mourned the loss of her son on Instagram, after the 18-year-old was killed in a
by Natalie Morin
Voices of Disability
Say The Word: Disabled
One in four adults in the U.S. are living with a disability, but you wouldn’t know it given the lack of representation in the workforce, Hollywood, a
by Maysoon Zayid
Pop Culture
Hayden Panettiere Shares Abuse Hotline After Her Ex Is Arrested &...
Actress Hayden Panettiere’s ex-boyfriend Brian Hickerson was arrested on July 16 and charged with corporal injury on a spouse/cohabitant. Panettiere
by Natalie Morin
Entertainment News
A Body Has Been Found In The Lake Where Naya Rivera Went Missing
Update July 13, 2020: Ventura County’s investigation into the disappearance of Naya Rivera has led to the discovery of an unidentified body. Accordin
by Ineye Komonibo
Entertainment News
Police Are “Confident” They Have Found The Body Of Naya Rivera Af...
After days of actively searching for her body in Southern California’s Lake Piru, local police officers have confirmed that the body of Naya Rivera has b
by Ineye Komonibo
Discover
R29 Stories & News
Watch
R29 Original Series & Films
Shop
R29's Most Wanted