Skip navigation!
Story from Politics
5:00 p.m. CNN has video of the incident, shot by an Al Hurra cameraman who happened to be on scene.
4:51 p.m.: A Federal law enforcement official has confirmed that the 34-year-old female driver is deceased, and that the child accompanying her appears uninjured. CNN reports that the first encounter with the suspect began when a uniformed Secret Service agent encountered the woman near the White House in a black sedan. Words were exchanged between the two. The driver initially ignored demands to turn away, but then sped off. The suspect then allegedly hit a police car near Capitol Hill, injuring the officer inside and triggering the airbag. After a use of force was authorized, multiple shots were then fired.
Advertisement
4:06 p.m.: Capitol Police Chief Kim Dine claims that the driver is in custody, not dead, but would not disclose her condition. Senate Sergeant at Arms Terrance Gainer told the AP that a woman was driving the car and had a child, who was taken to a hospital. Many sources are now claiming that shots were not fired by the suspect but came from police instead.
Several witnesses claim that the suspect rammed the gates of the White House, which ignited the pursuit by police, and that a dozen shots were fired. Another version is that she was she told to move her vehicle away from the White House gates by D.C. police, she hit a police car and discharged the car's airbag.
3:45 p.m.: At about 2 p.m. today, shots were fired in Washington, D.C., sparking a brief lockdown of the Capitol. Details are still emerging, but according to police officials, the incident began after a vehicle attempted to pass a barricade near the White House. Shots were then "potentially fired" by the female suspect, and a chase of the vehicle began. A police officer was injured in a crash that ensued. The chase ended near the Capitol, where the suspect's vehicle crashed into a barricade.
In a news conference held a short while ago, officials declined to comment on the condition of the suspect, but several sources are reporting that she was killed in the incident. Some sources are also reporting that a child was removed from the suspect's vehicle. Police officials did note, however, that they believe this is an isolated incident, and not related to terrorism. (CNN) 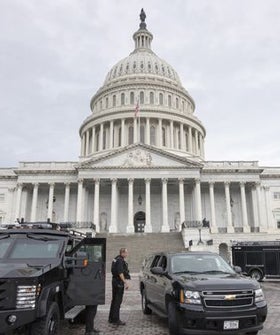 Photo: Via CNN.
Advertisement
News
Hillary Clinton Has Some Words For Bernie Sanders In Her New Docu...
On the first day of Trump’s senate impeachment, the politics Gods gave to us a re-hashing of the 2016 election (go figure). This throwback arrived in the
by Elly Belle
News
Greta Thunberg Calls Out World Leaders For Acting Like We’r...
Our earth is our home and our house is still on fire, young climate activist Greta Thunberg reiterated this week. At the World Economic Forum, Thunberg, wh
by Elly Belle
News
What To Know About Donald Trump’s Senate Impeachment Trial
Just when you thought impeachment season was coming to a close, a new set of trials will determine President Donald Trump’s future. On January 15, House
by Reed Nelson
News
Wealth Tax, Weed & Black Twitter: Here’s What Happened At T...
As we head into the Iowa caucuses on February 3, the pressure is building for the Democratic presidential candidates to distinguish themselves from the pac
by Natalie Gontcharova
US News
Warren & Klobuchar 2020? This Unprecedented Endorsement Was Not W...
In a historic announcement, The New York Times broke with longstanding tradition on Sunday night to endorse not one, but two Democratic contenders in the 2
by Brianna Provenzano
2020 Election
The 2020 Candidates Can’t Sanitize Martin Luther King, Jr.’...
On January 20th, Rev. Dr. Martin Luther King Jr. Day, VICE News and Cashmere Originals will partner to present the 2020 Iowa Democratic Presidential Black
by Nylah Burton
Feminism
The National Archives Say They “Made A Mistake” By Ce...
Update, January 18, 2020, 4 p.m.: The National Archives has apologized for censoring a photo of Women’s March signs and removed the altered image. &#
by Tara Edwards
US News
From “Thank U, Next” To Tossing A Coin To Your Witcher, These Wom...
by Lydia Wang
Politics
As Extremists Plan To Rally In Virginia, Activists Are Changing A...
On Monday, self-proclaimed militia groups — some from Virginia and many more from outside of Virginia — are rallying in a last-ditch attempt to intimid
by Shannon Watts
People
The Trump Administration Moved To Roll Back Michelle Obama’s Scho...
In a continuation of their dedication to deregulation, the Trump administration recently moved to ease restrictions placed on school nutrition programs put
by Tara Edwards
News
There’s New Evidence In The Case Of The Long Island Serial ...
Another piece of evidence has been found in a decade-long open investigation of a serial killer case on Long Island, New York. The infamous Long Island Ser
by Elly Belle
News
Evelyn Yang Reveals Her OBGYN Assaulted Her While She Was Pregnant
At the height of election season, Andrew Yang’s wife, Evelyn Yang, has stepped forward to share a powerful store about sexual abuse. In an interview with
by Elly Belle
Discover
R29 Stories & News
Watch
R29 Original Series & Films
Shop
R29's Most Wanted