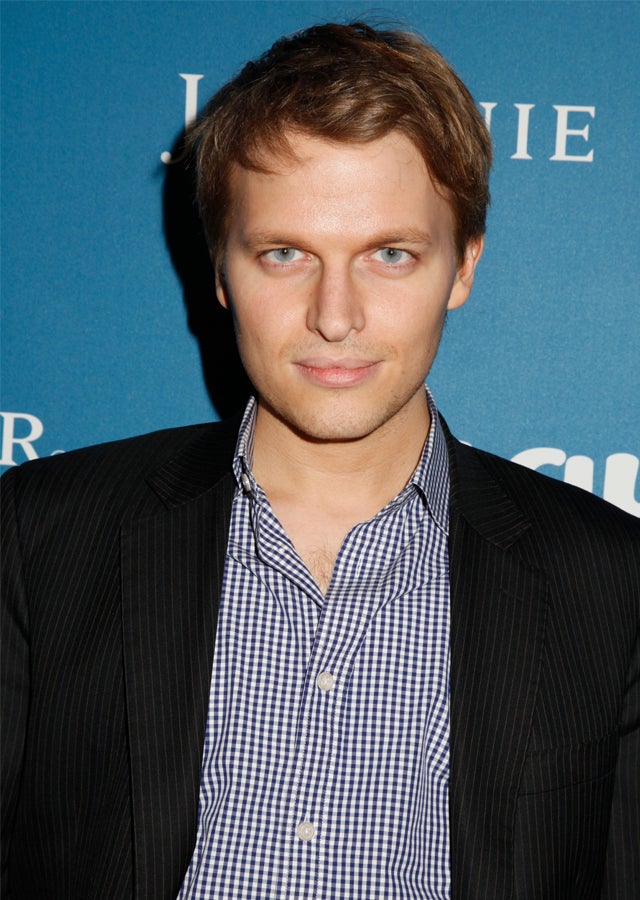 Photo: BEImages/Gregory Pace.
The resemblance is striking. The timeframe is right. So, could Ronan Farrow be the illegitimate son of Frank Sinatra? That's the question that popped up during a Vanity Fair interview with Mia Farrow and her children. When asked directly if Ronan, her son with Woody Allen, might actually have been fathered by Ol' Blue Eyes, Farrow responded, "Possibly." Way to play coy, Mia.
In response to a flurry of reports about his mother's comment yesterday, the 25-year-old Farrow tweeted a hint. "Listen, we're all *possibly* Frank Sinatra's son." Way to play it coy, Ronan.
Advertisement
But, who really cares if he is the son of Frank Sinatra? As far as celebrity children go, he's not your typical fame-sucking hanger-on or paparazzi-dodging recluse. Of the eight Farrow brood, Ronan is perhaps the only one who hasn't shied away from the limelight, but all in the name of good. He's a journalist, a lawyer, and a human rights activist who's worked for the Obama Administration as the founder and special advisor for the State Department Office of Global Youth Issues. In his work for the Wall Street Journal, Los Angeles Times, and Foreign Policy, he focuses on human rights abuses in the Horn of Africa. He was accepted to Yale Law School at the age of 15, but deferred his admission until 2006 in order to work for UNICEF and the former U.S. Ambassador, Richard Holbrooke. Oh, and then he became a Rhodes scholar.
He is also an outspoken critic of the UN's political bodies, has forged relationships with NGOs in Afghanistan and Pakistan, and vehemently defended his former colleagues at the Benghazi diplomatic mission after it was attacked in 2012. Now he's in talks to host his own MSNBC show aimed at getting Millennials more engaged with political affairs. And, as though his resume wasn't scary-awesome-to-the-point-of-being-depressing-for-the-rest-of-us, he's also a dreamboat.
As for the Frank Sinatra part? That's just icing on the Sexy Foreign Policy Specialist cake. (Examiner)
Advertisement
Entertainment News
Bachelor Nation Reacts To Tyler Gwozdz’s Sudden Death
On January 22, former Bachelorette contestant Tyler Gwozdz died after being hospitalized following a suspected drug overdose, People confirmed Thursday. He
by Kaitlin Reilly
Entertainment News
Prince Harry & Meghan Markle Will Leave Their HRH Titles Behind —...
When Prince Harry and Meghan Markle announced that they would be taking a step back from the royal family, there was a lot of confusion about what, exactly
by Lydia Wang
Pop Culture
Cameron Diaz & Benji Madden Got Creative With More Than Their Bab...
One of the toughest decisions parents must make is what to name their child. What’s in a name? How creative should you get? Should you continue family na
by Tara Edwards
Entertainment News
One Of R. Kelly’s Girlfriends Has Reunited With Her Estrang...
When Surviving R. Kelly first aired on Lifetime, the world was introduced to the harrowing personal stories of women who alleged that the R&B singer ha
by Ineye Komonibo
Entertainment
American Horror Story & The OA Actor Dead At 27
Hollywood has lost another star. Harry Hains, popular for his roles in shows like Ryan Murphy’s award-winning American Horror Story and the beloved sci-f
by Ineye Komonibo
Entertainment News
R. Kelly’s Girlfriends Got In A Fight On Instagram Live & N...
As if the charges he’s currently facing weren’t already gravely serious, R&B singer R. Kelly’s legal situation might be getting even more complic
by Ineye Komonibo
Entertainment News
Silvio Horta, Creator Of Ugly Betty, Found Dead At 45
TV producer and creator of ABC’s Ugly Betty Silvio Horta has died, according to Deadline. Reports around the cause of death vary at this time. Refinery29
by Kaitlin Reilly
Pop Culture
Riverdale‘s Vanessa Morgan Tied The Knot With A Ce...
Vanessa Morgan and MLB star Michael Kopech have tied the knot. Morgan, who plays Toni Topaz on the hit CW show Riverdale, and Kopech, a pitcher for the Chi
by Alejandra Salazar
Entertainment News
Leaving Neverland Accusers Can Sue For Sexual Abuse, After...
As of January 1, 2020, a California law preventing victims of childhood sexual assault from filing a claim against a corporation after the age of 26 has un
by Sarah Midkiff
Movies
Time’s Up Addresses Exploitation In Auditions, Nude Scenes & Work...
Time’s Up has taken a major step to empower workers in the film industry. The organization debuted its three-part guide to working in entertainment to ed
by Sarah Midkiff
Entertainment News
DaBaby Has Been Arrested On Battery Charges
Rapper DaBaby (real name Jonathan Kirk) was taken into police custody and questioned by authorities on New Year’s Eve during a trip to Miami, FL. The
by Ineye Komonibo
Entertainment
Nick Gordon, Ex-Boyfriend Of Bobbi Kristina Brown, Is Dead At 30
The Associated Press reports that Nick Gordon, the ex-partner of Whitney Houston’s late daughter Bobbi Kristina Brown, has died. He was 30.  Gor
by Leah Carroll
Discover
R29 Stories & News
Watch
R29 Original Series & Films
Shop
R29's Most Wanted