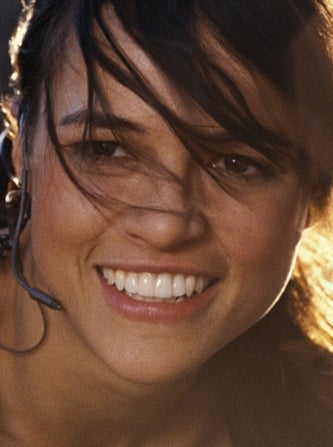 Photo: Courtesy Universal Pictures.
It's like, whatever, man. Recently speaking to Entertainment Weekly, Michelle Rodriguez has nonchalantly dropped the fact that she's bisexual. "I've gone both ways. I do as I please," she said. "Men are intriguing. So are chicks." She says she's been typecast as "butchy girl," and that the media simply assumes she's a lesbian. "Eh, they're not too far off," she admitted. Well, that's that then.
Except, it's a clear divergence from what Rodriguez has previously insisted, in perhaps the most horrifying way possible, that she is not attracted to women: "I'm not a lesbian....yeah. Michi likes sausage." (Well, there goes Oktoberfest.)
Advertisement
But, is this really a scandal? Absolutely not. The actress is so blasé about the matter that she relates it all through the lens of her...vagina. "I don't talk about what I do with my vagina, and they're all intrigued," she tells EW, referring to mass media. "I've never walked the carpet with anyone, so they wonder: What does she go with her vagina? [sic]"
So, are we seeing a casual coming-out trend? Perhaps. Let's assume it started with Zachary Quinto, when he cooly dropped his sexuality in an embedded clause, "As a gay man, [Angels in America] made me feel like there’s still so much work to be done, and there’s still so many things that need to be looked at and addressed," he told New York magazine in 2011. Wentworth Miller employed a similar tactic this year when he declined an invitation to Russia, due to its repressive attitudes toward homosexuals. Even more casual? WWE wrestler Darren Young came out to reporters while hanging around baggage claim. "Look at me," he said. "I'm a WWE superstar and to be honest with you, I'll tell you right now, I'm gay. And I'm happy. I'm very happy."
But, we're not going to include Anderson Cooper on this list, or even Jodie Foster and her recent Golden Globes speech. Sure, Foster mentioned her orientation as she spoke, but the whole affair was literally broadcast live from a stage in Hollywood. Those examples represent the fanfare-heavy, "I'm here and I'm queer" style of busting down the closet door that, while significant to the evolving status of LGBT culture, gives credence to a bogus but now-standard script for Americans who identify as queer — that there needs to be this loud occasion in which gays trade in their heterosexual shells for flamboyant new ones, because they were born this way, baby. Sorry, but we don't agree.
John Waters, patron saint of misfit gays, might side with us. Check out this interview with the Pink Flamingos director who scoffs at the very notion of coming out as "square":

(Us Weekly)
Unbothered
When Will Michael Che Face Consequences For Punching Down On Blac...
SNL host, writer and comedian Michael Che is showing zero remorse for crude comments he made about gymnastics legend Simone Biles, after she withdrew from
by Tayo Bero
Unbothered
DaBaby’s “Apology” Proves He’s Not Really Sorry For Homophobic Co...
After days of backlash for making homophobic comments on stage, rapper DaBaby offered an “apology” — and it’s not a good one. If you were hoping fo
by Tayo Bero
Entertainment News
Britney Spears’ Father “Profited Handsomely” Fr...
Britney Spears’ new lawyer is making good on his promise to “aggressively” file a petition to remove her father Jamie Spears from the pop star’s co
by Natalie Morin
Advertisement
Entertainment
Prosecutors Seek To Add Damning New Evidence In R. Kelly’s ...
This story contains discussion of sexual violence. Please proceed with care. The 2019 release of explosive documentary Surviving R. Kelly played an importa
by Ineye Komonibo
Entertainment News
Britney Spears Accuses Her Father Of Conservatorship Abuse In New...
For the second time in less than a month, Britney Spears spoke out in court, doubling down on allegations against her father, Jamie Spears, and reportedly
by Natalie Morin
Entertainment
You Think You Know Dove Cameron, But You Actually Have No Idea
You've seen her on Disney. You've heard her sing. And she's done caring what everyone else thinks.
by Maria Sherman
Entertainment
Drake Bell Is Sentenced To Probation & Community Service In Child...
In June 2021, former child actor Drake Bell was charged with attempted child endangerment and disseminating matter harmful to juveniles in a disturbing cas
by Ineye Komonibo
Entertainment
James Franco Reaches A Million Dollar Settlement In The Sexual Mi...
This story contains description of sexual abuse — please read with care. Almost two years after a class action lawsuit launched by former students of his
by Ineye Komonibo
Entertainment News
Drake Bell Pleads Guilty To Child Endangerment Charges
The legal firestorm surrounding Drake Bell just took a complicated turn after the former child star’s plea to the disturbing misdemeanor and felony c
by Ineye Komonibo
Entertainment News
Chris Brown Is Under Investigation Over Alleged Battery Of A Woman
Chris Brown is under investigation again. Brown is accused of striking a woman during an argument on June 18. According to a spokesperson for the Los Angel
by Sydney Clarke
Pop Culture
Despite Their Rift, Meghan & Harry’s Daughter’s Name Has Major Ro...
Meghan and Harry, the Duchess and Duke of Sussex, confirmed via a spokesperson that they welcomed their second child on Friday, June 4. The baby, a girl, w
by Lauren Le Vine
Culture
Naomi Osaka And The Necessity Of Refusal
On Monday, tennis champion Naomi Osaka announced that she was withdrawing from the French Open tournament in order to protect her mental health. Days
by Breya Johnson
Advertisement
Advertisement
Discover
R29 Stories & News
Watch
R29 Original Series & Films
Shop
R29's Most Wanted