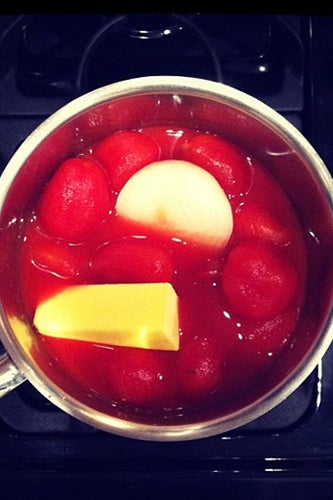 Photo: Courtesy of Leeann Duggan
I grew up in a French-focused kitchen. My mom was a CIA-trained chef, immersed in the classic techniques of France. When my parents divorced, my father briefly moved to Paris, and I spent summers learning to love moules marinières and saumon à la provençale. Julia Child was right up there with Big Bird in terms of my childhood heroes, so for me, nothing could top her French cuisine — that is, until I made Marcella Hazan's tomato sauce.
Marcella Hazan, considered the 20th-century godmother of Italian cooking, passed away yesterday, at the age of 89. Born in Cesenatico, a port town on the Adriatic coast of Italy, she focused her studies on biology and natural sciences. Hazan never cooked until she was married to Victor Hazan — her loving husband, who "could deal cheerfully with most of life's ups and downs, but not with an indifferent meal." The couple moved to New York, and Hazan found herself recapturing flavors of her home country, using only her sharp palate and memory. Discovering her own innate talent, she plunged into the industry, which welcomed her genius with open, excited arms. What started as informal classes taught in her apartment kitchen, became contributions to The New York Times, a heap of culinary awards, and, of course, her legendary cookbooks.
Advertisement
Her recipes are renowned for their tradition and simplicity — and firm instructions. While one beloved recipe involves just two lemons and a chicken, you'd better follow directions. While working from one of her cookbooks, one feels the presence of a no-nonsense, little-bit-bossy aunt looking over one's shoulder. Did you really level off that tablespoon of flour, or did you just eyeball it?, you imagine her asking. Well, do what you want – it's your piccata.
I'm quite ashamed to say, I only heard Hazan's name for the first time this last year, when rumors of an insane tomato sauce were whipping around the Internet. Allegedly, it consisted only of tomatoes, onion, and butter. I had my doubts, but then again — how could you go wrong with a shopping list like that? I set to work with this one-pot wonder on a Sunday afternoon. An hour later, I was eating it straight off the stove. This was "The One." I would find Marcella and make her mine. If not, I would simply propose to this pot of tomato sauce and live happily ever after.
A few weeks ago, I took the plunge and plonked down $35 for my own copy of Marcella's The Essentials of Classic Italian Cooking. French might be my first love, but I was tumbling headfirst into an amorous affair with Italy, its food, its flavors, and its aromatic, tomato-red heart. I cracked the spine and started reading with a passion I haven't felt since Harry Potter & The Half-Blood Prince. The technique descriptions and ingredient lists fell into my head like poetry. It was like walking into this woman's kitchen, filled with the scent of caramelizing onions on a rainy, Roman afternoon.
Advertisement
Hazan is gone, and the world has lost a voice and a talent such as it will never find again. There will only be one of her kind. To our great delight, however, we will always have her food. Kitchen novices: listen up. If you live in fear of having to use your stove, let Hazan show you how. She'll walk you through, step by step, telling you just how long to stir, and the very minute to add more salt. She'll take two lemons and a chicken, and give you the greatest meal of your life. Whether we're cooks, eaters, or just human beings — we should all know how to make the foods in our world sing like this. And, we should all try this tomato sauce.

Ingredients:
2 cups canned imported Italian tomatoes, cut up, with their juice
5 tablespoons butter
1 medium onion, peeled and cut in half
Salt to taste

Directions: Put the tomatoes in a saucepan, add the butter, onion, and salt, and cook uncovered at a very slow, but steady simmer for about 45 minutes, or until it is thickened to your liking and the fat floats free from the tomato.
Stir from time to time, mashing up any large pieces of tomato with the back of a wooden spoon. Taste and correct for salt.
Discard the onion before tossing with pasta. Serve with freshly grated parmigiano-reggiano cheese for the table.
Gift Guides
But First, Coffee: 22 Gift Ideas For Bean-Loving Buds
by Cortne Bonilla
Best Coffee
A Monthly Subscription That’s Coffee Snob Approved
Kate Spencer here, Most Wanted strategist and resident coffee enthusiast. I consider a quality cup of joe to be one of life’s simplest pleasures, so
by Kate Spencer
Most Wanted
There’s No Need For A Blender With This Smoothie Subscripti...
If you haven’t heard about Kencko, I’m honored to introduce you to my new favorite blender-less smoothie subscription service. You read that ri
by Mercedes Viera
Advertisement
Most Wanted
Clink, Clink: We Found The Best Drinking Glasses For Spring
Whether you’re a mocktail mixer who only sips inside with the AC blasting or a wine enthusiast who pairs every bottle with an al-fresco breeze, the n
by Alexandra Polk
Food & Drinks
Hot Sauce Enthusiasts: Get To Know The “Freaky Flavors̶...
The hot sauce folks who get it, get it. NPR reported back in 2012 that people who love the spicy sauce tend to be more adventurous and thrill-seeking, and
by Jinnie Lee
Food & Drinks
This Plant-Based Meal Delivery Service Taught Me To Love Veggies
I always think of April — a.k.a. the month that ushers in “spring cleaning” as a means to start anew — to be an opportune time to reassess,
by Jinnie Lee
Food & Drinks
Gifts For Moms Who Love Food As Much As We Do
by Marshall Bright
On-Site Shopping
The New York City Coffee Shop That Brews Gender Equality & Gives ...
You’re reading an On-Site Shopping story — meaning you can browse, add to cart, and actually purchase the product recommendations featured be
by Kate Spencer
Guide To Wine
This Stylish, Single-Serving Wine Won’t Go To Waste
I live alone. And let me tell you: it is extremely difficult to manage grocery portions for a party of one. Just take it from the trail of half-eaten bags
by Alexandra Polk
Most Wanted
The Best Prepared Meal Delivery Subscriptions, Reviewed By A Pick...
Prepared meal delivery services can be a godsend. Whether you’re a burnt-out WFH workaholic, a busy parent, a stressed-out student, or you’re s
by Mercedes Viera
Tried & True
This Berkey Water Filter Has Changed My Life
The idea to invest in an “expensive” water filter system came shortly after my two consecutive trips to Los Angeles last fall when I noticed se
by Jinnie Lee
Chocolate
Wondering Where To Buy Hot Chocolate Bombs This Valentine’s Day? ...
by Alexandra Polk
Advertisement
Advertisement
Discover
R29 Stories & News
Watch
R29 Original Series & Films
Shop
R29's Most Wanted