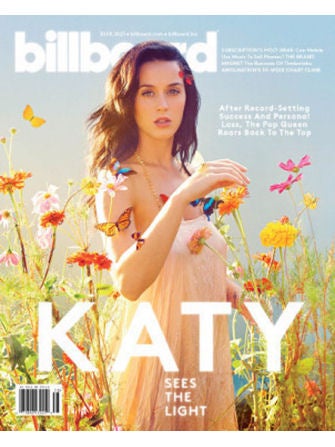 Photo: via Billboard.
Katy Perry graces the cover of Billboard this week, and her look is as effervescent as the name of her new album, PRISM, suggests. Shot by Ryan McGinley, the portrait showcases "the softer side" of Perry, who glows in pastels and natural makeup, surrounded by flowers and butterflies. It's a girlish reverie — and not quite what we expected when Perry hinted that her new album would be "dark" and influenced by ugly events like her divorce from Russell Brand and Saturn's return. But for Perry, things are darkest before dawn, and after enduring "suicidal" thoughts (and even annoying Barbara Walters), she's made it through to the other side, alive and well. Her new album reflects a new optimism and survivor attitude, according to the cover story.

Perry's new songs focus on love and loss, growing up, and her new spiritual awareness (she's taken a recent interest in astrology and meditation). Sonically, she's going a bit dancier, influenced by early-'90s house artists. Visually, it's all about naked exuberance, as her recent promo shots, video, and this cover suggest. This isn't the Katy Perry who once shot fireworks from her bra (though she had a great run). "'PRISM is more organic, au naturale [sic], vulnerable, and honest, but still has the same amount of fun,'" Perry says.
(Billboard)