Skip navigation!
Story from Politics
In the wake of the Kenyan mall attack that dominated headlines last week, the news focus has largely shifted to one of the alleged perpetrators in particular. Samantha Lewthwaite, popularly dubbed "The White Widow," is rumored to have been involved in the siege of Nairobi's Westgate shopping center that left at least 72 people dead after a four-day battle. Not much is known about the surviving group of Al Shabaab militants, five of whom were killed in the incident. But some have suggested that Americans were among those involved, and hostages reported hearing a woman speak English to the Somali attackers. While authorities claim there is no direct evidence yet connecting her, Lewthwaite appeared to be a prime suspect after Interpol issued a “red notice” Thursday for her arrest. But who is the White Widow?
Advertisement
The 29-year-old Lewthwaite is the widow of Germaine Lindsay, one of the four suicide bombers who attacked the London Underground in 2005. Born in Northern Ireland and raised Christian, she reportedly converted to Islam at 15 after her parents divorced. She met Lindsay in a Muslim chat room and married not long after, in 2002. Her parents refused to attend the ceremony.
After Lindsay killed himself in 2005, Lewthwaite denied any knowledge or involvement in the attacks. "I totally condemn and am horrified by the atrocities," she said at the time. "I am the wife of Germaine Lindsay, and never predicted or imagined that he was involved in such horrific activities. He was a loving husband and father. I am trying to come to terms with the recent events. My whole world has fallen apart, and my thoughts are with the families of the victims of this incomprehensible devastation."
Around 2009, Lewthwaite disappeared, along with her three children. She was believed to have married a man from London, Habib Saleh Ghani, who allegedly kept company with Asif Mohammed Hanif, the UK's first Islamist suicide bomber. Early last year, Kenyan officials issued an arrest warrant for a woman believed to be Lewthwaite, who used a fake South African passport under the name Natalie Faye Web. (The real Web was later found to have been a victim of identity theft.) The woman was allegedly involved with Al Shabaab, which was planning attacks on Kenya at the time.
Yesterday's "red notice," however, is not connected to the Westgate attack; it actually stems from a 2012 arrest warrant issued by Kenyan authorities, for whom she is wanted in connection to planned attacks in Mombasa. Further, she was named as one of the suspects in a grenade attack on a Mombasa bar in June of last year.
As for the Westgate attack, authorities are being cautious even if the press is less inclined to do so. Even though Kenyan Foreign Minister Amina Mohamed told PBS that a British woman who has “done this many times before” was involved, and an international intelligence source told the Guardian, "We cannot rule out that Lewthwaite played a role in this," no government has officially named her a suspect. (NYTimes) 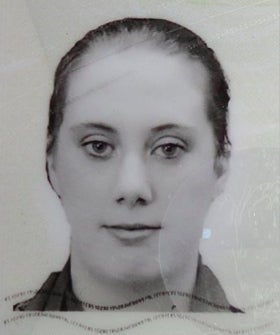 Photo: Via The New York Times.
News
Kayleigh, Please Stop Trying To Make The “Trump VaccineR...
In the last month, there has been some very promising news about the development of coronavirus vaccines. But almost as if on cue, White House press secret
by Sarah Midkiff
News
Of Course A New Orleans Swingers Convention Became A Major Supers...
In a turn of events that should surprise absolutely no one, a New Orleans swingers convention held during the middle of a nationwide pandemic has led to at
by Britni de la Cretaz
News
Trump’s Attempt To Pardon His Children Confirms He Loves Th...
Donald Trump is trying to make the final weeks of his presidency count by distributing as many golden parachutes as he can before President-elect Joe Biden
by Sarah Midkiff
News
Obama Faces Intense Backlash For Comments On The “Defund Th...
After an interview on Snapchat, President Barack Obama is receiving blowback for criticizing calls to “defund the police,” which he referred to as “a
by Britni de la Cretaz
News
How Many Different COVID Guidelines Is The White House Ignoring T...
Pandemic or no pandemic, there are things about the holiday season that never change. Two of these things are Melania Trump’s eye for questionable season
by Sarah Midkiff
News
Here’s Why Everyone’s Mad That Rahm Emanuel Might Joi...
At the heels of Neera Tanden’s controversial nomination for Joe Biden’s cabinet, there’s another contender for the President-elect’s new administra
by Elly Belle
News
Don Jr. Emerged From His COVID Fever Dream & Wants To Meddle In T...
A week and a half after Donald Trump Jr. announced that he tested positive for COVID-19 — and spent his quarantine flooding Twitter with asinine statemen
by Sarah Midkiff
Donald Trump
Watch As Arizona’s Governor Sends Trump Directly To Voicemail
After a tumultuous election cycle and an attempted “coup,” the tides have turned for what feels like the hundredth time as state results contin
by Elly Belle
Gift Guides
The Best Ways To Give Back This Holiday Season
This year has been called many things, and few are very positive. Across the United States, communities are suffering from lack of access to medical care,
by Elly Belle
2020 Election
Trump’s Rallies Might Have Been Huge — But They Might Have ...
During his failed campaign for reelection, President Donald Trump hosted dozens of massive rallies, whose robust attendance, he said, was an indication tha
by Asia Ewart
News
We Have Some Questions About The Mysterious Monolith Found In Uta...
If you played a drinking game in which you had to take a shot every time someone described the year of our lord 2020 as “unparalleled,” you’d be pass
by Danielle Campoamor
Donald Trump
So, Here Are All The Bad Things Trump Can Do Before Leaving Office
With the end of Donald Trump’s only term as president inching closer and closer, the lame-duck POTUS hasn’t exactly been shy about exercising his power
by Asia Ewart
Discover
R29 Stories & News
Watch
R29 Original Series & Films
Shop
R29's Most Wanted