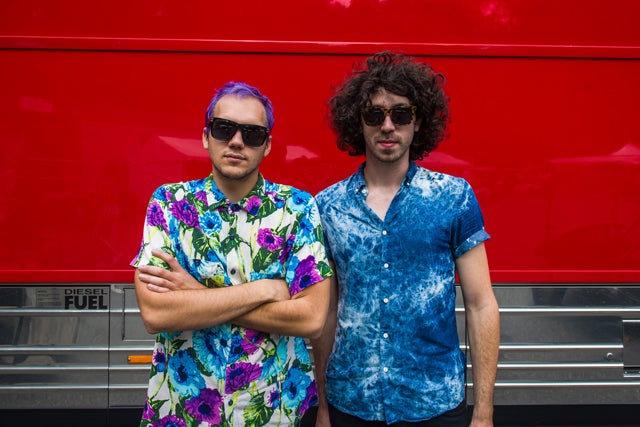 Photographed by Kate Warren.
Ghost Beach has been touring hard this summer, and showing the DMV some serious love along the way. We first caught the NY-based duo, known for their unique "tropical grit-pop" sound, at Trillectro this summer, then at a chill DJ gig at U Street Music Hall, and finally, with an amazing set at FreeFest this past weekend.
And despite their jam-packed schedule, we were able to snag some QT with bandmates Josh Ocean and Eric Mendelsohn in their FreeFest greenroom where we discussed everything from what they hate most about the music industry to their secret obsession. Teaser: You'll never guess who it is!
Advertisement

What do you hate most about the music industry?
Josh: "That is actually a really great question. Well, here's the thing: Obviously, our love of music trumps anything we have against the music industry, because we would not be doing it. But..."
Eric: "Things can get political. The politics."
Josh: "I feel like there's too much thinking involved in the music industry. I know it sounds cheesy, but music is about moments. About connecting with people. And when music connects with people, it works. Sometimes there's too much thought that goes into it."
Eric: "People try to put too many rules and boxes on it and break it down into a set of steps."
Josh: "It's really the business side of the music business."

What was your first job?
Josh: "I was like, 12, and I delivered food. I am from a small island and we have markets and I would deliver food to houses. I made muffins and had to pull the muffins from the tin with a knife and I was horrible at it. I used to chop the muffins up. They must have lost like half the muffins. I think I did that for four days."
Eric: "I shoveled snow. Or mowed lawns, I think. Pretty standard adolescent-boy neighborhood stuff."

Who did you listen to growing up?
Josh: "I like a lot of The Police. Sting is a huge influence. I liked a lot of punk stuff growing up, like NOFX. I also really loved Paul Simon, the Graceland album. My mom was always playing that. Those are my three big influences."
Eric: "I was kind of into more of the classic rock stuff. I was really into Steely Dan. And my dad was playing jazz. But Josh and I both were really conscious of pop music. We both inherently know and remember really specific pop moments. Like Ace of Base. Stuff like that. That was big when we were kids."
Josh: "We like the late '80s pop stuff because it was sort of just when everything came together. You had new technologies — the synthesizers at the time, new recording technologies. But also a lot of the old-school style. People were great musicians. There was no Auto-Tune. No computers. People had to be really good. And towards the late '80s there was a lot of world influences, and sort of a cool sound going on. And that was pop music. We were like, 'This is almost the gold standard.' It was such an awesome fusion."

Eric: "We were listening to Peter Gabriel. That was Top 40 pop music, on MTV, and that stuff is incredible. It's ridiculous. Everything about it."

Who would be your dream artist to collaborate to with?
Josh: "I'd like to work with Diplo, personally. I think he makes awesome beats."
Eric: "That would be pretty crazy."

What is your secret obsession?
Josh: "Shania Twain."

Eric: "Oh yeah, we are both hands-down obsessed with Shania Twain."
Josh: "I really want to fly to Vegas to see that show."
Eric: "Like, we have all her albums. I keep on forgetting to sing that at karaoke."

Most treasured possession?
Josh: "My Vans."

Last thing you lied about...
Josh: "Saying that my Vans were my most prized possession."

Is there a career-defining moment you've had?
Josh: "I think every time we play and people have a good time, it's a [life-affirming] moment."

TV Recaps
R29 Recaps: Every Episode From Elite Season 4
Never has there ever been a high school so rich in money and murder than Las Encinas, and season 4 of Netflix’s Elite is only solidifying the prep school
by Olivia Truffaut-Wong
TV Shows
The Physical Cast Is Ready To Get, Well, You Know
by Leah Marilla Thomas
Movies
14 Movies On Hulu That Are Perfect For Father’s Day
by Sabienna Bowman
Advertisement
Movies
20 Movies To Stream For Pride Month (& Every Month)
by Shannon Carlin
Movies
All The Voices (& One Grey’s Anatomy Cameo) In Pixar...
by Ariana Brockington
TV Shows
Ari’s Elite Finale Twist Is So Much Darker Than You ...
Major, major spoilers for Elite on Netflix are ahead. In the premiere episode of Elite season 4, “The New Order,” Las Encinas newbie Ari Blanco (Carla
by Ariana Romero
TV Shows
A Guide To The New Rich & Glamorous Faces Of Netflix’s ...
by Natalie Morin
Pop Culture
Miley Cyrus’ Ex & The Hills Star Kaitlynn Carter Is ...
Miley Cyrus’ reality star ex-girlfriend is going to be a mom. Kaitlynn Carter is pregnant with her first child and took to Instagram to make it offic
by Shannon Carlin
Movies
How In The Heights’ “96,000” Pool Scene ...
Summer is just different in Washington Heights. That was clear to In The Heights cinematographer Alice Brooks after her first visit to the neighborhood, wh
by Shannon Carlin
Entertainment
Kim Kardashian Sets The Record Straight About Details Of Her Divo...
The devil works hard, but Andy Cohen works harder. So perhaps it’s no surprise that the reality TV Godfather didn’t shy away from asking Kim Ka
by Shannon Carlin
TV Shows
How The True Story Behind Physical Shaped Its Most Distu...
If you’re planning on tuning in to Physical just to see a permed-out Rose Byrne do high kicks to a killer ‘80s soundtrack, there’s something you shou
by Anne Cohen
TV Shows
You Have 9 New Netflix Treats To Stream This Weekend. Here’s What...
by Ariana Romero
Advertisement
Advertisement
Discover
R29 Stories & News
Watch
R29 Original Series & Films
Shop
R29's Most Wanted