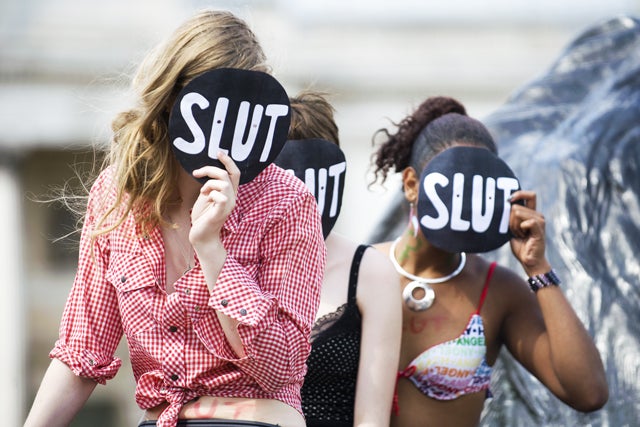 Photo: Ben Cawthra/REX USA.
It's 2013, right? We all know that women aren't raped because of how they look or the fact that they were walking alone or that they were "asking for it," right? Right?
Although this seems like such common sense, it appears that the court system here in the U.S. didn't get the memo that victim-blaming is totally unacceptable. In two recent court cases — cases that showcase how little the judicial system has progressed in the last 30 years — prosecutors have used the "she's a slut" tactic in attempts to discredit the victims of sexual assault. In a recent Naval court proceeding — what's called an Article 32 hearing, defense attorneys grilled the victim for over 30 hours over a period of days to determine whether there was enough evidence to go to trial .
Advertisement
The young woman is accusing three other Naval officers of sexually assaulting her at a party last year. Because this hearing took place outside of the civilian court system, lawyers were not held to the same standards as in traditional sexual assault cases — many deeply personal and biased questions not typically allowed, are allowed here. For example, lawyers asked the female midshipman (a junior rank in the U.S. Navy) questions about her sexual habits, whether she wore a bra, and whether “felt like a ho” afterward the act was committed.
This comes on the heels of another incredibly disheartening verdict in a sexual assault case. Last month in Montana, a teacher convicted of raping Cherice Moralez, his then-14-year-old student, was sentenced to a mere 30 days in jail — the presiding judge determined that he had "suffered enough" after losing his career and marriage.
In this case, too, the victim's volition and sexuality were presented as mitigating factors, factors that somehow invited the sexual assault. Moralez was accused of being older than her chronological age and of being "in control of the situation." As if a 14-year-old girl could truly be in control of having sex with a 48-year-old man in a position of authority over her. Sadly, Cherice took her own life before justice could be served — an act her mother believes was connected to her sexual assault and its aftermath.
Unfortunately, these two cases are representative of a larger problem with how our culture and legal system views sexual assault. When a woman is mugged on the street, no one asks her if she was wearing a bra or why she wasn't holding on to her purse more tightly. She's typically regarded as blameless — no one cross-examines her on the witness stand about why she had the poor sense to be robbed. Yes, sexual assault is far more complex than burglary, but it's still time for our judges and courts to reexamine how they sentence and prosecute sexual assault cases.
Sex Toys
The Most Famous Amazon Vibrator In 2 New Colors
We call them hidden gems but it’s no secret that Amazon boasts a treasure trove of the internet’s most viral products. You can find it all on t
by Karina Hoshikawa
Most Wanted
A Deal From The Vibrator That Feels Like Getting Oral From A Cloud
Super Sale Alert: In celebration of National Singles Day, Dame’s including a free Lemon Kip vibrator with all orders of $150+ through September 26
by Mary Frances Knapp
Sex
Add These Natural, Organic Lubes To Your Bedside Table
by Erika W. Smith
Advertisement
Most Wanted
The Best Rabbit Vibrators, According To The Internet
by Karina Hoshikawa
Relationships
What Happens After A Cheater Is Outed On TikTok? Not Always What ...
Picture this. It’s 8 a.m. on a Saturday. You’re already awake because today’s your last bridal fitting. Downstairs, your family gathers to discuss we
by Beth Ashley
Most Wanted
These Labor Day Sex Toy Sales Are Orgasmic
by Karina Hoshikawa
Sex
Does TikTok’s Sex Pillow Trick Actually Work?
Sometimes, you encounter a TikTok hack that changes your life. Maybe you’ve made some permanent adjustments to your skincare or beauty regimen; maybe
by Lydia Wang
Deals
Get The Vibrator Of Your Dreams For Up-To-75% Off Right Now
by Karina Hoshikawa
Sex Toys
26 (Orgasmically-Rated) Sex Toys You Can Buy On Amazon
by Kasandra Brabaw
Sex Toys
These Quiet Vibrators Will Help You Masturbate In Peace
by Kasandra Brabaw
Most Wanted
These Are The Best Places To Buy Sex Toys Online
by Karina Hoshikawa
Most Wanted
The Best Clitoral Vibrators, According To A Sex Therapist
by Karina Hoshikawa
Advertisement
Advertisement
Discover
R29 Stories & News
Watch
R29 Original Series & Films
Shop
R29's Most Wanted