Skip navigation!
Story from Politics
Listen up, ladies. If we're to believe the cover of this week's Newsweek Pakistan, your vagina could be carrying a bomb right now. The cover story pertains to a purported uptick in female suicide bombers, which is not without validity. But the art department at Newsweek Pakistan decided that the best way to represent this was with an exploding tampon and a cover line that reads "LADY PARTS." Not only do men need to worry about women's wandering wombs, but now menses are a hazard, too? Then again, Pliny the Elder wrote that a menstruating woman can scare away hailstorms, whirlwinds, and lightning, which is pretty useful for a weekend getaway.
Advertisement
So, just to reiterate: Women's sex organs are extremely dangerous. Are your lady parts currently rigged to an improvised explosive device? Go ahead and check.
If you're still reading, we'll assume your vagina has not exploded. Yet. (MediaBistro) 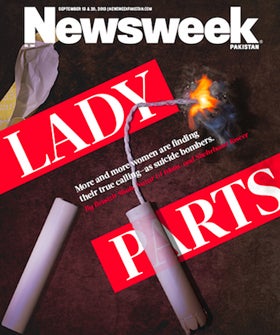 Photo: Via Media Bistro.
Unbothered
Kevin Samuels’ Death And The Politics Of “Grief Respectability”
In the weeks since Kevin Samuel’s death, there have been various reactions to his passing. Some praised the late YouTube host, a self-proclaimed “datin
by Cheyenne M. Davis
Abortion Access For All
How To Access Abortion Now — & If (& When) Roe Falls
In the next several weeks, the Supreme Court will likely overturn Roe v. Wade, the 1973 federal ruling that protects a person’s right to choose abortion.
by Molly Longman
Abortion
Kamala Harris On Forcing People To Stay Pregnant: “Women Are Dyin...
On May 11, as expected, the Democrats’ latest effort to protect abortion rights failed to pass in the U.S. Senate. But — echoing the likely doomed
by Molly Longman
Advertisement
Unbothered
The Violence Against Women Act Isn’t Enough to Protect Women
In March, Angelina Jolie sat down with The Today Show to speak about her work in getting The Violence Against Women Act (VAWA) reauthorized. Propelled by h
by Hanna Phifer
Unbothered
As A Black Queer Person, I’m Often Disinvited From The Cookout
I came out to my mom in the middle of a Dunkin’ Donuts.  I’ll admit that it wasn’t my ideal place to have the talk. I planned to keep my identit
by Amaris Ramey
Unbothered
What Southern Black Women Can Teach Us (And The Country) About Ou...
It was Angela Davis who reminded us that “when Black women win victories, it’s a boost for virtually every segment of society.” It says a lot that Dr
by Brea Baker
Unbothered
On Ketanji Brown Jackson, ‘Making History,’ And The Expense Of Bl...
Judge Ketanji Brown Jackson is exhausted. I see it in her tight-lipped smiles that feel forced. In the shift in her posture over the course of lengthy hear
by Brea Baker
News
The Ottawa Convoy Showed Exactly Who Canada Is & We Can’t Just Mo...
The Ottawa convoy has left, but Canadians have lost. As the waters recede, we are still trying to come to grips with how for three weeks, the city where th
by Erica Ifill
Abortion
Abortion Rights Are Going From “Bleak To Bleaker” — T...
On September 15, 2021, Madi* found herself in the bathroom of her sorority house, holding a positive pregnancy test. The first thought that went through he
by Molly Longman
Unbothered
Child Q Is What Happens When Black Girls Are Robbed Of Their Youth
Warning: The following contains graphic details which some readers may find upsetting. This week, a report published by Hackney Council revealed that in 20
by Banseka Kayembe
Somos Latinx
Even if She Doesn’t Become President of Colombia, Francia M...
Born in Colombia’s gold-panning river town of La Toma in 1982, Francia Márquez Mina grew up amid poverty and armed conflict, with few prospects ahead of
by Christina Noriega
News
How You Can Help The People Of Ukraine
The world has watched on with outrage and horror as the crisis in Ukraine continues to unfold. Last month, Russian forces began invading the sovereign east
by Alicia Vrajlal
Advertisement
Advertisement
Discover
R29 Stories & News
Watch
R29 Original Series & Films
Shop
R29's Most Wanted