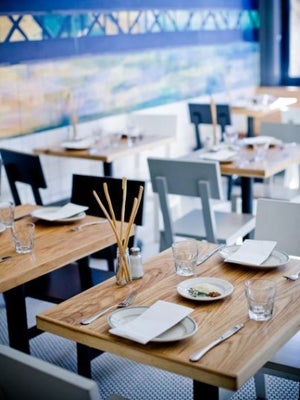 Photo: Via Facebook/Delfina
With buzzy new restos opening up and firing up their grills practically on a daily basis, you might think owning a stove is a mute appliance here in S.F. But, as it turns out, us city denizens dine out less than the rest of the nation. Don’t believe us? Give that gasping a rest because Zagat’s 2014 San Francisco Bay Area Restaurant Survey supports our statement, and gives a few more surprising tidbits on how we gobble up the goods. For example: Even though we’re less likely to break bread outside our homes, when we do, we tend to pay a little over a dollar more per meal than the rest of the States. No shock there — yet, we’re more likely to tip less, too.
Advertisement
The survey also sheds light as to why we’re not hitting up that new burger joint across town: S.F.ers are 5% more peeved by having to find parking than the rest of the nation. And, if we have to sit around more than 30 minutes for a table, we’d rather cross out our names on the waiting list altogether. What doesn’t rub us the wrong way? Our companions snapping photos of their dish. We are the city that brought the world Instagram, after all. Can you say, “Hashtag: No biggie?”
So, what could drag us out of own kitchen? A flurry of new French and seafood spots should do the trick. According to the survey, we think we’re lacking some new spots to grab crème brulee and oysters. For the most part, however, we love wolfing down some Italian fare — anyone else craving Delfina all of a sudden?
Tell us: Does this survey describe your eating habits to a T? Spill in the comments below.
Most Wanted
Clink, Clink: We Found The Best Drinking Glasses For Spring
Whether you’re a mocktail mixer who only sips inside with the AC blasting or a wine enthusiast who pairs every bottle with an al-fresco breeze, the n
by Alexandra Polk
Food & Drinks
Hot Sauce Enthusiasts: Get To Know The “Freaky Flavors̶...
The hot sauce folks who get it, get it. NPR reported back in 2012 that people who love the spicy sauce tend to be more adventurous and thrill-seeking, and
by Jinnie Lee
Food & Drinks
This Plant-Based Meal Delivery Service Taught Me To Love Veggies
I always think of April — a.k.a. the month that ushers in “spring cleaning” as a means to start anew — to be an opportune time to reassess,
by Jinnie Lee
Advertisement
Food & Drinks
Gifts For Moms Who Love Food As Much As We Do
by Marshall Bright
On-Site Shopping
The New York City Coffee Shop That Brews Gender Equality & Gives ...
You’re reading an On-Site Shopping story — meaning you can browse, add to cart, and actually purchase the product recommendations featured be
by Kate Spencer
Guide To Wine
This Stylish, Single-Serving Organic Wine Won’t Go To Waste
I live alone. And let me tell you: it is extremely difficult to manage grocery portions for a party of one. Just take it from the trail of half-eaten bags
by Alexandra Polk
Most Wanted
The Best Prepared Meal Delivery Subscriptions, Reviewed By A Pick...
Prepared meal delivery services can be a godsend. Whether you’re a burnt-out WFH workaholic, a busy parent, a stressed-out student, or you’re s
by Mercedes Viera
Tried & True
This Berkey Water Filter Has Changed My Life
The idea to invest in an “expensive” water filter system came shortly after my two consecutive trips to Los Angeles last fall when I noticed se
by Jinnie Lee
Chocolate
Wondering Where To Buy Hot Chocolate Bombs This Valentine’s Day? ...
by Alexandra Polk
Best Coffee
Here’s 50% Off A Cool & Customizable Cold-Brew Subscription
Cold brew rose to fame throughout the 2010s with devotees swearing by apparent ability to deliver morning jitters-levels of caffeine minus any extra acidit
by Alexandra Polk
Food & Drinks
The 27 Best Online Bakeries For Ordering Valentine’s Day Tr...
by Brianna Arps
Chocolate
These Chocolate Gift Boxes Are A Valentine’s Day Treat, Not A Trope
by Alexandra Polk
Advertisement
Advertisement
Discover
R29 Stories & News
Watch
R29 Original Series & Films
Shop
R29's Most Wanted