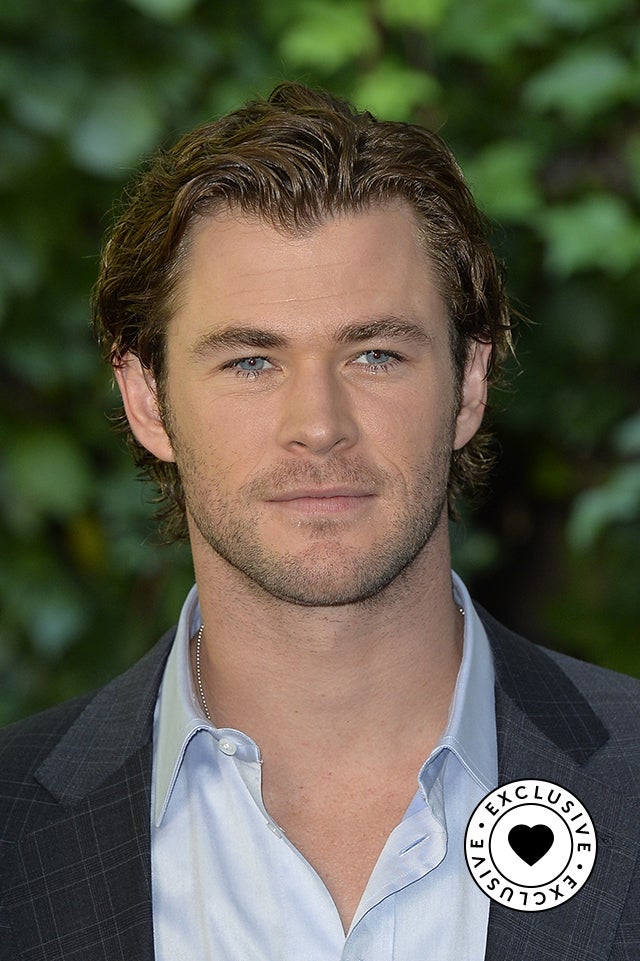 Photo: REX USA/AGF s.r.l./Rex.
On the brink of turning 30, Chris Hemsworth seems to have it all: a solid career, a gorgeous wife, and a new daughter. And even though he's the middle child in a clan of Aussie acting hunks, the Thor star is easily the biggest among them. Perhaps that's due to his surfing background, or the healthy dose of competition his siblings provided growing up, but his shine has continued to eclipse brothers Liam and Luke on screen this year. In November, he'll return to theaters in Thor: The Dark World. But you'll be able to catch him even sooner in Ron Howard's true-life racing drama, Rush, later this month.
Advertisement

What was it like playing playboy Formula One driver James Hunt?
"Any time you get to play a character that doesn't want to conform to any particular rules or standards is great. My character was certainly, I think, the biggest example of that as far as what I have been exposed to. He did what he wanted to do whether you agree with it or not. I think that you've got to respect that."

Did you have much experience with racing before you started filming Rush?

"The first time I ever got in one of those cars was during the prep period of filming. You're locked into this little cabin with your shoulders bumping up against the shell of this thing, and your feet are crammed in there — the whole machine becomes an extension of you. You can feel every bit of vibration, every bump, and the power at your fingertips. So I immediately kind of went, ‘Oh, I can see how you could be addicted to this.'"

Is it safe to say you're a thrill-seeker?

"Surfing was something I grew up doing. As kids, we lived out in the bush and we used to injure ourselves quite often, whether it was riding dirt bikes, or rope swings, or on things that we would build in the backyard. I had dirt bikes as a kid, but not much anymore. My wife rides motorbikes more than I do, actually. She’s more of an adrenaline junkie than I am!"

Growing up, did you face a lot of competition from your brothers?

How did you physically prepare for the film?

"First of all, I would rather have to put on weight than have to lose it. Basically, I went from lifting weights and eating lots of protein to doing the opposite: running, cardio, under-eating, over-training. I have said this before, but my wife was pregnant at the time, and she reminds me that I was moodier than she was. I went from about 215 pounds to 195 pounds, which was painful."

How has becoming a parent affected you as an actor?

"I think you don’t tend to sweat the small stuff as much. Whether you want to be or not, you've got to be present for them, and I absolutely want to be. It puts things in perspective; all of a sudden you realize what it's all about. Everything else is driving and supporting her as opposed to my own personal ego, and whatever I want, you know? You start to think about things differently."

Speaking of driving, what kind of driver are you?

"I'm pretty safe, especially when the baby seat is in the back — even when she is not sitting in it. I get in the car with my wife now, and even when our daughter isn't there, I'm like, ‘Whoa, slow down! What’s the rush? There’s a red light!’ And she’s always like, ‘Shut up! When did you become a driving instructor?"

Music
Billie Eilish “Never Want to Post Again” After Photos...
Billie Eilish debuted a new look on the June cover of British Vogue that imploded the internet — and made her never want to post on social media again. T
by Natalie Morin
Unbothered
We Created Hollywood’s New Inclusion Rider — Here’s Why It’s Just...
Fanshen Cox and Kalpana Kotagal co-authored the Inclusion Rider. Cox is the head of strategic outreach at Pearl Street Films and co-host of the Webby nomin
by Fanshen Cox
Unbothered
DMX’s Death Has Exposed The Insensitivity That Still Surrounds Su...
Dis providing an opportunity to shift how audiences and the media engage with substance use, mental health, and the complications that arise with celebrity
by Sharine Taylor
Advertisement
Entertainment News
Johnny Depp Loses Appeal In Amber Heard Libel Case Amid Other Law...
Johnny Depp is dealing with another loss in his drawn out battle against the courts and ex-wife Amber Heard, losing his appeal against the UK High Court ju
by Ineye Komonibo
Entertainment
T.I. & Tiny Harris Deny Numerous Disturbing Claims Of Abuse & Rape
This story contains details of sexual violence. Musicians and married couple T.I. (real name Clifford Harris) and Tameka “Tiny” Harris are pote
by Ineye Komonibo
Entertainment News
FKA Twigs Shares Dark Details Of Her Abusive Relationship With Sh...
This story contains details of intimate partner violence. Months after revealing that her former relationship with Shia LaBeouf was allegedly wrought with
by Ineye Komonibo
Entertainment News
Dustin Diamond of Saved By The Bell Fame Is Dead At 44
Dustin Diamond, the actor best known as playing the quirky Screech on beloved ’90s NBC sitcom Saved By The Bell, died on February 1. He was 44. Accor
by Natalie Morin
Entertainment News
Hollywood Icon Cicely Tyson Dead At 96
Cicely Tyson, boundary-breaking and award-winning actress, died on Thursday, January 28, 2021. The beloved film star was 96 years old, and her cause of dea
by Ineye Komonibo
Entertainment
Mossimo Giannulli To Finish His Prison Sentence Behind Bars
Updated January 27, 2021: Despite the lengthy pleas of his legal team, Mossimo Giannulli will be spending the rest of his prison sentence inside of an actu
by Ineye Komonibo
Entertainment News
FKA Twigs’ Lawsuit Against Shia LaBeouf Is Far From His First
Shia LaBeouf is at the center of a new disturbing lawsuit accusing him of domestic abuse towards his ex-girlfriend FKA twigs (real name Tahliah Debrett Bar
by Ineye Komonibo
Entertainment News
FKA Twigs Sues Shia LaBeouf Over Abusive Relationship
Art pop singer FKA twigs (real name Tahliah Debrett Barnett) is breaking her silence about the tumultuous nature of her relationship with Shia LaBeouf, all
by Ineye Komonibo
Entertainment News
Natalie Desselle Reid Of Cinderella & B*A*P*S F...
Natalie Desselle Reid, the comedic actress known for roles in the Brandy-led version of Rodgers & Hammerstein’s Cinderella and UPN sitcom Eve has die
by Natalie Morin
Advertisement
Advertisement
Discover
R29 Stories & News
Watch
R29 Original Series & Films
Shop
R29's Most Wanted