Skip navigation!
Story from Politics
Where are the top-ranking female editors? Not at Forbes, that's for sure. Following the announcement that Nancy Gibbs is taking over at TIME, she noted she was "the first managing editor to wear pumps — so far as we know." The Daily Beast ran with the comment and examined the uniqueness of her situation. Turns out that, despite the glass-ceiling-shattering editorial strides of their own editor-in-chief Tina Brown (who is on her way out in January), Condé Nast's Anna Wintour, The New York Times' Jill Abramson, and Mother Jones' Clara Jeffery — women are still, very much, a minority in the ultimate boys' club of media. Which publications are some of the least lady-editor-friendly? The Beast explored.
Advertisement
Take the 124-year-old Wall Street Journal, which now has Rebecca Blumenstein as deputy editor-in-chief, but a male (Dow Jones CEO Gerard Baker) still runs the show as managing editor. As the Beast points outs, 40% of women are now breadwinners, meaning they have just as much reason to be interested in business news and culture as men. Would it kill WSJ to reflect these demographics in its hiring decisions? It directs the same question toward The Atlantic and The New Republic, whose top positions are currently occupied by men, as they always have been. The latter currently has a 29-year-old editor-in-chief in Chris Hughes. (To be fair, while a woman has never been EIC in the progressive rag's 99-year history, there are several key females on staff, including managing editor Amanda Silverman.) Back in June, The New Republic actually did a feature on the plight of "serious journalism" in women's magazines, which is worth a read.
Then there's Popular Science. Other tech/science-leaning magazines like Wired and Scientific American have been helmed by women at various points, but not at this old chestnut, which has been around since 1872. And finally, we saved the most insular for last: Forbes. Not only is it heavily male-dominated, but it's also super-nepotistic, having a long bloodline of the magazine's namesake family running it still. All we can say is, hopefully, we're the disruptive generation that will help rewrite the future of gender politics in publishing — and all creative fields. These women certainly give us hope. [The Daily Beast] 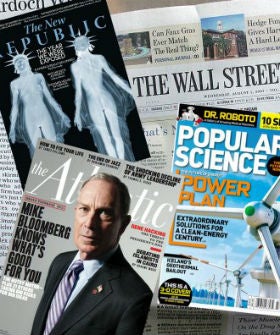 Photo via: The Daily Beast
News
American Idol Finalist Leaves Show After Video Surfaces Of...
After he secured a spot as an American Idol finalist on Sunday, 16-year-old Caleb Kennedy exited the show over a resurfaced social media post that appeared
by Erin Corbett
News
Marjorie Taylor Greene Harassed AOC, Following & Yelling At Her F...
After attempting to argue with Rep. Alexandria Ocasio-Cortez for weeks on Twitter, Rep. Marjorie Taylor Greene “aggressively confronted” AOC in the Hou
by Lydia Wang
News
Apparently Don Jr.’s Ex-Wife Left Him For A Secret Service ...
Shockingly, Donald Trump, Jr.’s ex-wife, Vanessa Trump, came to the realization that she didn’t have to spend her life with someone whose own f
by Lydia Wang
Advertisement
News
A Tiger Is On The Loose In Texas, So Of Course Carole Baskin Is G...
Remember when Netflix’s Tiger King aired somehow both two months and nine years ago? Since becoming a household name in March 2020, Carole Baskin — the
by Lydia Wang
News
There’s A Reason Caitlyn Jenner Didn’t Vote For Trump...
It’s difficult to convince people you aren’t a fan of Donald Trump when you’re working with his former campaign manager, but Caitlyn Jenn
by Lydia Wang
News
A Fort Bragg Sergeant Has Been Accused Of Killing Another Soldier
Tiara Vinson, a soldier stationed at Fort Bragg in North Carolina, is being held at Cumberland County Jail accused of murdering fellow soldier, Kelia Horto
by Sarah Midkiff
News
Why Everyone Is Talking About Andrew Yang’s Israel Tweet
Update: On Wednesday, Andrew Yang responded to backlash following his tweet about Israel with a new statement, backtracking his previous stance and voicing
by Lydia Wang
News
SNL Is Accused Of Cultural Appropriation In A Sketch About...
Update: In response to the backlash against SNL, co-head writer and “Weekend Update” anchor Michael Che posted a statement on Instagram. “
by Asia Ewart
Unbothered
R29’s Global Editor-In-Chief Gets Candid With Symone Sanders
Symone Sanders is no stranger to success. At 25, she became the youngest presidential press secretary on record while working alongside U.S. Senator Bernie
by R29 Unbothered
News
Marjorie Taylor Greene & Matt Gaetz Joined Forces In The Rally Fr...
There are bad dreams, there are full-on nightmares, and then there’s what unfolded on Friday night in a ballroom in The Villages, a retirement community
by Danielle Campoamor
Asian American
The Asian-American Activism You Won’t See On Instagram
The most effective work that's being done to protect and support our communities isn't meant to look nice on social media.
by Kim Tran
Unbothered
An Offering For Ma’Khia Khi’Riana Ty’lea Bryant, Who Deserv...
On April 20, woven in-between the breaking news of Derek Chauvin’s conviction in the murder of George Floyd, TikToks of 16-year-old Ma’Khia Bryant made
by Amber J. Phillips
Advertisement
Advertisement
Discover
R29 Stories & News
Watch
R29 Original Series & Films
Shop
R29's Most Wanted