Liberal news outlets cooed and conservative ones bemoaned the news yesterday that Pope Francis has apparently softened on the hard-line doctrinal policies of his predecessor, Pope Benedict XVI. "Not Even the Pope Likes the Church's Obsession with Abortion," said the
New York Times. "Coolest Pope Ever Urges Catholics to Chill Out About Abortion and Gays," was Jezebel's headline. And true enough, that's how it sounded. Yesterday, Francis spoke with Rev. Antonio Spadaro, of the Italian Jesuit journal La Civiltà Cattolica, and decried the church's "obsession" with abortion and homosexuality. "It is not necessary to talk about these issues all the time," he said. "The dogmatic and moral teachings of the church are not all equivalent. The church’s pastoral ministry cannot be obsessed with the transmission of a disjointed multitude of doctrines to be imposed insistently."

Advertisement
But that tone changed again today, when Francis blasted abortions as a symptom of today's "throw-away culture" and urged Catholic gynecologists to bring lives into the world. "Every child that isn't born, but is unjustly condemned to be aborted, has the face of Jesus Christ, has the face of the Lord," he said.
Is he flip-flopping to assuage the more conservative Catholics put off by his comments Thursday? Possibly, but it's also likely that those comments were misinterpreted by a public eager for papal reform, especially considering Francis' encouraging interview a couple months ago when he said that it was not his place to judge homosexuals.
The Vatican's senior communications adviser, Greg Burke, told the AP, "The pope is not condemning his predecessors. What he is saying is 'We've spent a lot of time talking about the boundaries. We've spent a lot of time talking about what is sin and what's not. Now let's move on. Let's talk about mercy. Let's talk about love.'" (AP) 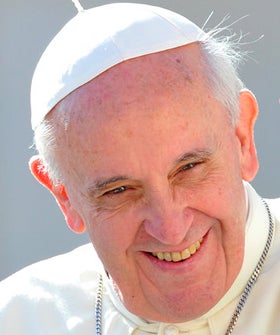 Photo: Via The New York Times.
News
American Idol Finalist Leaves Show After Video Surfaces Of...
After he secured a spot as an American Idol finalist on Sunday, 16-year-old Caleb Kennedy exited the show over a resurfaced social media post that appeared
by Erin Corbett
News
Marjorie Taylor Greene Harassed AOC, Following & Yelling At Her F...
After attempting to argue with Rep. Alexandria Ocasio-Cortez for weeks on Twitter, Rep. Marjorie Taylor Greene “aggressively confronted” AOC in the Hou
by Lydia Wang
News
Apparently Don Jr.’s Ex-Wife Left Him For A Secret Service ...
Shockingly, Donald Trump, Jr.’s ex-wife, Vanessa Trump, came to the realization that she didn’t have to spend her life with someone whose own f
by Lydia Wang
Advertisement
News
A Tiger Is On The Loose In Texas, So Of Course Carole Baskin Is G...
Remember when Netflix’s Tiger King aired somehow both two months and nine years ago? Since becoming a household name in March 2020, Carole Baskin — the
by Lydia Wang
News
There’s A Reason Caitlyn Jenner Didn’t Vote For Trump...
It’s difficult to convince people you aren’t a fan of Donald Trump when you’re working with his former campaign manager, but Caitlyn Jenn
by Lydia Wang
News
A Fort Bragg Sergeant Has Been Accused Of Killing Another Soldier
Tiara Vinson, a soldier stationed at Fort Bragg in North Carolina, is being held at Cumberland County Jail accused of murdering fellow soldier, Kelia Horto
by Sarah Midkiff
News
Why Everyone Is Talking About Andrew Yang’s Israel Tweet
Update: On Wednesday, Andrew Yang responded to backlash following his tweet about Israel with a new statement, backtracking his previous stance and voicing
by Lydia Wang
News
SNL Is Accused Of Cultural Appropriation In A Sketch About...
Update: In response to the backlash against SNL, co-head writer and “Weekend Update” anchor Michael Che posted a statement on Instagram. “
by Asia Ewart
Unbothered
R29’s Global Editor-In-Chief Gets Candid With Symone Sanders
Symone Sanders is no stranger to success. At 25, she became the youngest presidential press secretary on record while working alongside U.S. Senator Bernie
by R29 Unbothered
News
Marjorie Taylor Greene & Matt Gaetz Joined Forces In The Rally Fr...
There are bad dreams, there are full-on nightmares, and then there’s what unfolded on Friday night in a ballroom in The Villages, a retirement community
by Danielle Campoamor
Asian American
The Asian-American Activism You Won’t See On Instagram
The most effective work that's being done to protect and support our communities isn't meant to look nice on social media.
by Kim Tran
Unbothered
An Offering For Ma’Khia Khi’Riana Ty’lea Bryant, Who Deserv...
On April 20, woven in-between the breaking news of Derek Chauvin’s conviction in the murder of George Floyd, TikToks of 16-year-old Ma’Khia Bryant made
by Amber J. Phillips
Advertisement
Advertisement
Discover
R29 Stories & News
Watch
R29 Original Series & Films
Shop
R29's Most Wanted