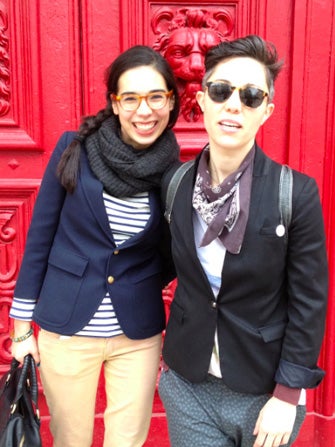 Photo: Via BuzzFeed
Everybody, meet Blake and MacKenzie. They got engaged last weekend, and they used the occasion (and their announcement) to teach everybody a little something about eschewing traditional sexual orientation and gender roles. You see, until she met Blake, MacKenzie had only dated guys. But alas, she fell in love with Blake, who is very much not a guy. While this may seem like a relatively simple concept to some, others feel a constant need to slap on a label. For her part, MacKenzie doesn't consider herself a lesbian, but rather a woman who happens to be marrying another woman.
To avoid confusion (and bias sentiment), the happy couple took to Facebook to announce their engagement — and provided a handy (and hilarious) Q&A. For all those acquaintances she hadn't seen in several years, MacKenzie answered questions like "Didn't you date dudes when I knew you in high school/college/your early 20s?" Or, "Is it weird being in a same-sex relationship for the first time?" Her responses are equal parts informative and incredibly witty, and basically kick sexual-orientation labels to the curb. Heartwarmingly, all the reactions were more than positive. MacKenzie certainly isn't the first person to change her sexual orientation, but we're applauding her and Blake for making a statement. Head over to BuzzFeed to read the rest of their story, and mazel tov to the happy couple! (BuzzFeed)
Sex Toys
LELO Is Celebrating Masturbation May In The Best Way (Hint: It...
by Karina Hoshikawa
Relationships
I Changed My Name When I Got Married, & I’ve Felt Weird About It ...
Two years ago, I got married and took my husband’s last name, adopting my original surname as my middle name and dropping my birth-given middle name alto
by Mirel Zaman
Living
Be Real — Has WFH Turned You Into A Lunchtime Masturbator?
Of all the changes we’ve experienced this year, the blending of home and workspace is probably the most physically, emotionally, and philosophically over
by Michelle Santiago...
Advertisement
Most Wanted
Maude Launched A Sultry New Sexual-Wellness Scent
In the spring-fever spirit, Brooklyn-based sexual-wellness darling Maude is releasing two of its bestselling goodies in a sultry new scent no. 2. Burn (the
by Karina Hoshikawa
Most Wanted
Dame’s Bestselling Suction Vibrator Is BACK (& $15 Off!)
You never want something until you can’t have it. So, each week in The Sell-Out, we’re getting the scoop from your favorite retailers on what’s
by Karina Hoshikawa
Books & Art
Gina Frangello Knows That Perfection Is The Opposite Of Intimacy
“Certain issues of being a woman follow you no matter where you go,” Gina Frangello told me over the phone not long ago. “No matter how y
by Kristin Iversen
Most Wanted
This Up-To-50%-Off Lovehoney Sale Is Hot, Hot, HOT
Upgrading your sex toy game just got more affordable. Lovehoney’s Big Brand Event is officially turned ON with vibrators, lubes, lingerie, and m
by Karina Hoshikawa
Books & Art
A.E. Osworth Wrote A Love Letter For Their People
I fell in love with A.E. Osworth’s writing the first time I read it. I came across an essay of theirs and read it over and over and over again, and then
by Britni de la Cretaz
Most Wanted
These Are The Best Places To Buy Sex Toys Online
by Karina Hoshikawa
Sex
12 Tips For Your First Time Having Sex
So, you’ve decided to have sex for the first time. Whether you’re in high school, college, in your twenties, or fifties, making your sexual debut can f
by Erika W. Smith
Most Wanted
Egg Vibrators Are Spring’s Hottest Sex Toy
by Karina Hoshikawa
Sex
Move Over Lube, There’s A New Sex Serum In Town
by Karina Hoshikawa
Advertisement
Advertisement
Discover
R29 Stories & News
Watch
R29 Original Series & Films
Shop
R29's Most Wanted