Skip navigation!
Story from Politics
Hassan Rouhani is surprising almost everyone with his refreshingly moderate tone. Wednesday, the recently elected Iranian president spoke with Ann Curry at NBC in his first interview with an American news outlet as head of state. He also penned an op-ed for the Washington Post Thursday, in which he declared, "Gone is the age of blood feuds."
"We must work together," he wrote, "to end the unhealthy rivalries and interferences that fuel violence and drive us apart." Rouhani decried unilateralism and the "zero-sum, Cold War mentality" as dangerous to diplomacy, and announced that he would seek to broker a dialogue between the Syrian government and its opposition groups. He also asked that world leaders engage "on the basis of equal footing and mutual respect, to address shared concerns and achieve shared objectives."
Advertisement
In terms of Iran's contentious nuclear program, Rouhani argued that it's "as much about diversifying our energy resources as it is about who Iranians are as a nation, our demand for dignity and respect and our consequent place in the world." This follows his interview with Curry, in which Rouhani explicitly stated, "We have never pursued or sought a nuclear bomb and we are not going to do so."
Not everything was roses, however. Rouhani deflected on a question from Curry about whether he believed that the Holocaust was "a myth." (His predecessor, the bellicose Mahmoud Ahmadinejad, has infamously refused to acknowledge that the Holocaust ever happened.) He also continued his government's tradition of trading insults with Israel, calling it "an occupier and usurper government" that "has brought instability to the region with its warmongering policies." (For what it's worth, Israeli president Benjamin Netanyahu has also called Rouhani "a wolf in sheep's clothing" who just wants to "smile and build a bomb.")
We'll see how things continue to shake out as Rouhani attends the U.N. General Assembly meetings scheduled for next week. The White House acknowledged that a meeting between the Iranian and US presidents — potentially the first since the 1979 Islamic Revolution — was possible. (Reuters) 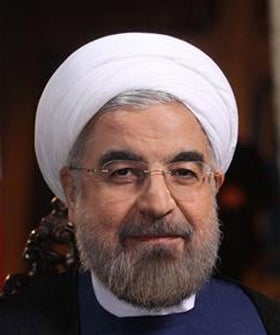 Photo: Via Reuters.
News
Marjorie Taylor Greene’s Harassed AOC Long Before She Was I...
Update: On Friday, a deleted video from 2019 of Rep. Marjorie Taylor Greene harassing Rep. Alexandria Ocasio-Cortez through her office door mail slot reeme
by Lydia Wang
News
A Reading List To Understand The Israel-Palestine Crisis
by Kristin Iversen
Coronavirus
Jill Biden Just Wore Her Mask Indoors — & That’s OK
On Thursday, the Centers for Disease Control and Prevention (CDC) issued an update on its masking guidance. People who are fully vaccinated against COVID-1
by Erin Corbett
Advertisement
Asian American
Asians Moved Back Home En Masse: Then, Something Beautiful Happened
“I honestly didn't expect to love it as much as I did.”
by Katherine Singh
News
American Idol Finalist Leaves Show After Video Surfaces Of...
After he secured a spot as an American Idol finalist on Sunday, 16-year-old Caleb Kennedy exited the show over a resurfaced social media post that appeared
by Erin Corbett
News
Apparently Don Jr.’s Ex-Wife Left Him For A Secret Service ...
Shockingly, Donald Trump, Jr.’s ex-wife, Vanessa Trump, came to the realization that she didn’t have to spend her life with someone whose own f
by Lydia Wang
News
A Tiger Is On The Loose In Texas, So Of Course Carole Baskin Is G...
Remember when Netflix’s Tiger King aired somehow both two months and nine years ago? Since becoming a household name in March 2020, Carole Baskin — the
by Lydia Wang
News
There’s A Reason Caitlyn Jenner Didn’t Vote For Trump...
It’s difficult to convince people you aren’t a fan of Donald Trump when you’re working with his former campaign manager, but Caitlyn Jenn
by Lydia Wang
News
A Fort Bragg Sergeant Has Been Accused Of Killing Another Soldier
Tiara Vinson, a soldier stationed at Fort Bragg in North Carolina, is being held at Cumberland County Jail accused of murdering fellow soldier, Kelia Horto
by Sarah Midkiff
News
Why Everyone Is Talking About Andrew Yang’s Israel Tweet
Update: On Wednesday, Andrew Yang responded to backlash following his tweet about Israel with a new statement, backtracking his previous stance and voicing
by Lydia Wang
News
SNL Is Accused Of Cultural Appropriation In A Sketch About...
Update: In response to the backlash against SNL, co-head writer and “Weekend Update” anchor Michael Che posted a statement on Instagram. “
by Asia Ewart
Unbothered
R29’s Global Editor-In-Chief Gets Candid With Symone Sanders
Symone Sanders is no stranger to success. At 25, she became the youngest presidential press secretary on record while working alongside U.S. Senator Bernie
by R29 Unbothered
Advertisement
Advertisement
Discover
R29 Stories & News
Watch
R29 Original Series & Films
Shop
R29's Most Wanted