Skip navigation!
Story from Entertainment News
The always quotable Oscar Wilde once said, "There is only one thing in the world worse than being talked about, and that is not being talked about." It's with that in mind that we bring you news of these unsavory rumors circulating the Internet about Zac Efron. According to TMZ, the High School Musical star recently left rehab after a brief stint, but not just for alcohol abuse, as was first reported. Instead, Efron has been battling a cocaine addiction that allegedly "spiraled out of control" during the filming of Seth Rogan's new comedy Neighbors, in which Efron co-stars. TMZ's sources claim that Efron's drug use was well-known on set, but was also not limited to cocaine. Efron apparently dabbled in ecstasy, too. He was also involved in a "coke rager" at the MGM Grand earlier this year, which resulted in $50,000 worth of damage to a suite, according to TMZ.
Is this gossip unfounded? There's no way to tell at the moment. Expectedly, Efron's rep told TMZ, "Don't think we'll be making a comment." But rumor's just rumor until proven otherwise, and often exists in that sinister, nebulous space between fact and fiction. To quote another wordsmith, the 2nd-century Carthaginian Christian scholar Tertullian, "Why call rumor an evil? Because it flies? Because it testifies? Or because it generally lies? Even when it has some modicum of truth in it, rumor is not free from some taint of falsehood; it detracts from, adds to, or deviates from the truth." (TMZ) 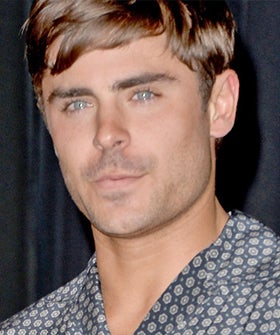 Photo: Via TMZ
Advertisement
Entertainment
Lori Loughlin Seeks Dismissal Of College Bribery Case Over “...
Following claims that the FBI pressured “Operation Varsity Blues” ringleader William “Rick” Singer into lying about Lori Loughlin and Mossimo Giann
by Ineye Komonibo
Entertainment News
Vanessa Bryant Condemns First Responders Who Allegedly Shared Pho...
On Sunday morning, Vanessa Bryant posted an official statement on her Instagram condemning the alleged behavior of first responders who are rumored to have
by Moná Thomas
Entertainment
Where Are Gabriel Fernandez’s Guardians Now?
In the new Netflix true crime docu-series The Trials of Gabriel Fernandez, director Brian Knappenberger explores the devastating murder of eight-year-old G
by Ineye Komonibo
Entertainment News
Bachelorette‘s Chad Johnson Explains Arrest For Robb...
In a new Instagram video, former Bachelorette contestant Chad Johnson shared his side of the story on his recent arrest for robbery. Johnson talked directl
by Kaitlin Reilly
Entertainment News
Alyssa Milano: The Next Phase of the #MeToo Movement? Justice
Harvey Weinstein is a rapist. Not “alleged.” Not “accused of sexual misconduct.” Not “some women claim.” Weinstein walked into a Manhattan cour
by Alyssa Milano
Entertainment
“Mercy” Singer Duffy Says She Left Limelight After Be...
After an extended hiatus of over a decade, Welsh singer Duffy (real name Aimee Duffy) is explaining why she has been out of the public eye for so long. In
by Ineye Komonibo
Entertainment News
Vanessa Bryant Files Wrongful Death Lawsuit Over Kobe & Gianna...
When the news broke that Kobe Bryant had been killed in a deadly helicopter accident along with his 13-year-old daughter Gianna and seven other people, fan
by Ineye Komonibo
Entertainment News
Hollywood Voices React To Landmark Guilty Harvey Weinstein Verdict
For the first time in decades, the over 80 women who accused movie producer Harvey Weinstein of sexual harassment and misconduct are seeing justice. The 67
by Kathryn Lindsay
Entertainment News
B. Smith, Groundbreaking Model and Entrepreneur, Is Dead At 70
Barbara “B.” Smith, a model, restaurateur, and lifestyle guru previously dubbed the “Black Martha Stewart,” has died at the age of 70. Smit
by Alexis Reliford
Entertainment
Amanda Bynes Plans To Challenge Her Conservatorship In Court
Amanda Bynes says she is planning to challenge her long-standing conservatorship over expensive restrictions on her mental health treatment. Bynes shared a
by Sarah Midkiff
Entertainment
20-Year-Old Rapper Pop Smoke Killed During Hollywood Home Invasion
The global hip hop community is mourning yet another loss after learning of the death of newbie rapper Pop Smoke (real name Bashar Barakah Jackson).
by Ineye Komonibo
Entertainment News
Queen Of Katwe Star Nikita Pearl Waligwa Is Dead At 15
Nikita Pearl Waligwa, the young Ugandan actress who starred in the 2016 Disney film Queen of Katwe, has died of a brain tumor. She was 15 years old. Queen
by Alejandra Salazar
Discover
R29 Stories & News
Watch
R29 Original Series & Films
Shop
R29's Most Wanted