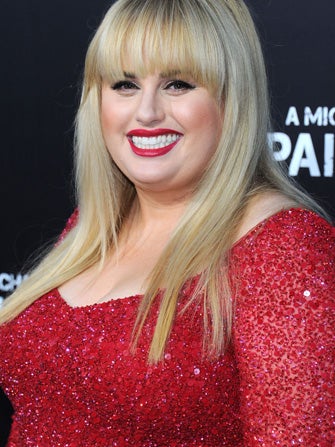 Photo: REX USA/Stewart Cook.
Rebel Wilson is hilarious. She is crass, brazen, quick-witted, and fearless. Of course, the honest truth is that if you had to describe to a friend who was only vaguely familiar with her work, you probably wouldn't use any of those aforementioned descriptors; you would probably say, "Remember? She was the fat girl in Pitch Perfect." Would that bother Rebel Wilson? We don't know, but we do get the feeling that she's the kind of person who would be very much okay with owning the word — a body-positive way of thinking that we've previously discussed at length.
The other uncomfortable truth is that in coverage of Wilson, including articles on this site, you're probably not going to get through the page without some kind of discussion about how she is a great role model for young girls, or how she's changing the way we think about beauty, or how she is — as Lynn Hirschberg puts it in this recent article for New York — "the American sitcom's first genuine outcast." That's because we're a country that is largely obsessed with body image, for better or for worse. The article is ostensibly a cerebral look at her career, her future, her innate comedic ability and the niche market she occupies with such success.
Advertisement
That is, at least, what one would expect in a profile about a successful comedic actress with a headline asking whether or not she has the chops to pull off a potentially history-making show. But, it unfortunately devolves into an indulgent discussion about how she does not look like her Hollywood co-stars. The subtext here is probably something along the lines of, "she looks like one of those rap guys' girlfriends" (thanks, Sir Mix-a-Lot). Gawker has already done a spot-on takedown of some of the more ridiculous moments which highlight the trouble with this type of conversation, but we have just a few more things to add. 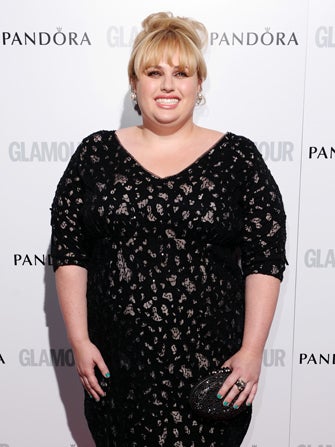 Photo: REX USA/David Fisher.
It's not that Wilson is refusing to participate in this conversation. She talks openly about her weight and regularly relies on a certain, somewhat meta brand of "fat joke" in her comedy. Because, she is a rare sight in Hollywood, and it is natural that people will look to her as an inspiration. But, with Wilson, we get the feeling that she doesn't want or need to be a champion of a cause. Wilson told Hirschberg in the article that she has a Post-It note carrying a sort of artist's statement, which she looks at whenever she's tired or down. It reads like this: “The bigger purpose in all of this is to inspire girls who don’t think they’re socially all that — who don’t think they’re pretty and popular. To let them know they can have fun and exciting lives.” So, no, it's not about making fat girls or ugly girls or weirdos feel beautiful. It's about reminding them that beauty is not everything, that fine features and a defined waist will not automatically deliver a life of glamour and adventure.
All told, Hirschberg's article is almost entirely about Wilson's weight. And yet, if one were to read only Wilson's quotes without the editorializing, the lasting impression would have almost nothing to do with that. It's not that she doesn't talk about her weight, or that she refuses to address it — quite the opposite, in fact. She talks about it naturally, openly, and hilariously — and you never get the feeling that she's compensating for some repressed feeling of self-loathing. The good news here is that Wilson's quotes are often so ridiculously awesome that she — her persona, as it includes but is not defined by, her size — still shines brightest.
Unbothered
White Supremacy Is To Blame For The Buffalo Massacre. That’s It.
A clip of CNN reporter Victor Blackwell breaking down in tears live on air while talking about last weekend’s horrific massacre of 10 Black people in a B
by Kathleen Newman-B...
Unbothered
Megan Thee Stallion’s Bombshell New Interview Reveals Devastating...
In July 2020, Megan thee Stallion was involved in an intense police stop after attending a celebrity pool party in Los Angeles, leading to the shocking rev
by Ineye Komonibo
Unbothered
Ari Lennox Shares An Update After Her Amsterdam Arrest
Updated December 2, 2019: Days after being detained at Schiphol Airport in the Netherlands, Ari Lennox has resurfaced on social media to give worried frien
by Ineye Komonibo
Advertisement
Unbothered
Two Men Convicted For The 1965 Assassination Of Malcolm X Have Be...
Nearly 60 years after the shocking assassination of civil rights leader Malcolm X, a new development in the investigation into his murder has led to t
by Ineye Komonibo
Unbothered
The Zombification of Whitney Houston
In Haitian mythology, the idea of what we now call zombies emerged from enslaved Africans’ deepest fear: not even death would bring freedom. Though suici
by Brooke Obie
Unbothered
Actually, Netflix, Content Like Dave Chappelle’s Transphobic Come...
Update: Netflix has fired the employee who was organizing an upcoming walkout (set to happen Wednesday, October 20) of trans staffers and allies in protest
by Kathleen Newman-B...
Unbothered
Years After Her Death, The Science Community Is Still Treating He...
In the 1950s, a Black woman named Henrietta Lacks walked into Johns Hopkins Hospital to be treated for cervical cancer, and her cells would go on to b
by Ineye Komonibo
Somos Libres
Why Black Puerto Rican Women Are Leading an Anti-Racist Media Ren...
While the 2020 Census was essential to many communities across the United States, it held a different meaning for Puerto Ricans. Battered after a decades-l
by Frances Solá-Sant...
Unbothered
R. Kelly Facing Life In Prison After Being Found Guilty Of Racket...
This story contains discussion of sexual violence. Please proceed with care. Updated September 27, 2021: Months after being charged and indicted for nine g
by Ineye Komonibo
Unbothered
Jennifer Hough’s First On-Air Interview About Nicki Minaj &...
*Editor’s note: this story contains discussions about sexual violence, threats, and intimidation. Please read with care.  A month after publicly all
by R29 Unbothered
Unbothered
CBS Will Now Turn Its Controversial Activist Competition Series I...
Updated September 16, 2021: After a wave of backlash followed the announcement of its controversial new series, CBS is going back to the drawing board to r
by DarkSkyLady
Unbothered
Megan Thee Stallion Wins Two Big Legal Victories — Against Her La...
Megan Thee Stallion scored two major legal wins this week, after a judge granted her the go-ahead to release the remix of BTS’ Butter that she is feature
by Tayo Bero
Advertisement
Advertisement
Discover
R29 Stories & News
Watch
R29 Original Series & Films
Shop
R29's Most Wanted