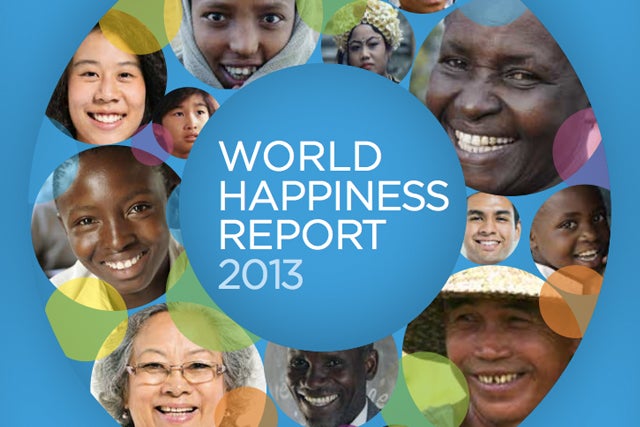 Photo: Courtesy of United Nations.
Can you quantify happiness? The United Nations is pretty sure it can. For the second year running, the U.N. has invited its member countries to measure the happiness of their populations in an effort to help them make better public policy decisions. Yesterday it released its 2013 World Happiness Report, in which it asserted, "Happiness is an aspiration of every human being, and can also be a measure of social progress." Happiness, besides being valuable in itself for most of us, also contributes to longer lifespans, higher earnings, and increased productivity. That is, it pays to keep your people smiling.
Advertisement
The key variables for measuring happiness contained no real surprises: a high real GDP per capita, a healthy life expectancy, having someone to depend upon, generosity, perceived freedom to make life choices, and freedom from corruption all indicate a smiley disposition.
If you want to optimize your own chances of statistically living a happy life, take a cue from some of the report's findings:

1) Live in Scandinavia.
Norway and Sweden were among the happiest countries, along with the nearby Netherlands. True, this icy hinterland may have given birth to Edvard Munch, Henrik Ibsen, and Ingmar Bergman, who were not exactly known for a cheery demeanor. But you know who else is Scandinavian? ABBA. And they's some happy Swedes.

2) Being alive in America is maybe overrated.
The US slipped to 17th place on the list, just behind Mexico. That's right: We didn't even edge out a country with five times our murder rate (and a fifth of our GDP per capita). So, just not being killed each day is clearly not a major factor in happiness.

3) Be rich, but not too rich.
Money can indeed solve some of your problems. (Check out the correlation between the rising economies in Latin America and the Caribbean and their boost in happiness in the last year.) But it can't solve everything. Ireland, like the US, boasts one of the top average wages for its population and falls right behind us on the happiness index. But those happy people in northern Europe live more comfortably than most (the Swedish government even says so) without being the world's highest earners.

4) See a shrink.
The U.N. report claims that mental illness is a major causative factor in misery. (Go figure.) It estimates that 10 percent of the world's population suffers from depression or anxiety — but even in developed countries, fewer than one-third of those afflicted are in treatment.

5) Canada's a safe bet.
It may have slipped from last year to the number six spot, but Canada's still one of the happiest countries in the world. Ff you can't bear the climate in northern Europe, head to our northern neighbors instead. (CBS News)

Unbothered
I Thought Being Nice Would Shield Me From Racism At Work — I Was ...
It will come as no surprise that I don’t have much in common with “Hot Girl” rapper Megan Thee Stallion. But, turns out, we are the same height, and
by L'Oréal Blackett
Health Care
Ketamine Saved My Wedding — And Possibly My Life
This is the third installment in a three-part series about being prescribed ketamine treatment for a traumatic brain injury. You can read the second instal
by Fortesa Latifi
Unbothered
Sad Girls Club Is Providing Free Therapy To Black Women & Femmes
Elyse Fox says she started Sad Girls Club by accident. In 2016, the self-proclaimed filmmaker by trade released a documentary titled Conversations With Fri
by Stephanie Long
Advertisement
Unbothered
I Asked A Black Therapist How To Survive Seasonal Depression
It happens every year here in New York City. You’re living your best life in the streets, mingling at the block parties, acting up at the BBQs, when sudd
by Stephanie Long
Unbothered
Megan Thee Stallion’s “Anxiety” Gives Me A Voic...
I had a panic attack in the middle of an indie R&B concert in Atlanta last month. It wasn’t the first time it happened. Big crowds always overwhelmed
by Amaris Ramey
Wellness
Doctors Changed My Ketamine Treatment 5 Weeks Before My Wedding
This is the second installment in a three-part series about being prescribed ketamine treatment for a traumatic brain injury. You can read the first instal
by Fortesa Latifi
Tech
7 Best SAD Lamps On Amazon To Help Fight The Winter Blues
by Cory Stieg
Wellness
What 5 Weird (But Common) Sex Dreams Mean, According To A Therapist
by Stevie Martin
Wellness
I’m Being Prescribed Ketamine Treatment For My Brain Injury...
The first time I smoke weed, I am a teenager standing in a droughted riverbed with other nervous, coughing high schoolers. The first time I do ketamine, I
by Fortesa Latifi
Mind
Can Productivity Gummies Help Me Write A Screenplay? Theoreticall...
Deal alert: Use code R29 at checkout for 15% off at ASYSTEM. There’s been a lot of talk about productivity levels lately, whether it’s that peo
by Jinnie Lee
Abortion Access For All
How To Channel Your Frustration Into Action After Roe’s ...
In the wake of the reversal of Roe v. Wade, if you believe in abortion, reproductive health, or myriad other human rights, you may be feeling, well, a lot.
by Molly Longman
Living
The 9-8-8 Helpline Exists In An America Full Of Broken Systems — ...
On Saturday, July 16, 9-8-8, the 9-1-1 alternative designed specifically for mental health crises, was launched across the country. Ahead of the rollout, m
by Molly Longman
Advertisement
Advertisement
Discover
R29 Stories & News
Watch
R29 Original Series & Films
Shop
R29's Most Wanted