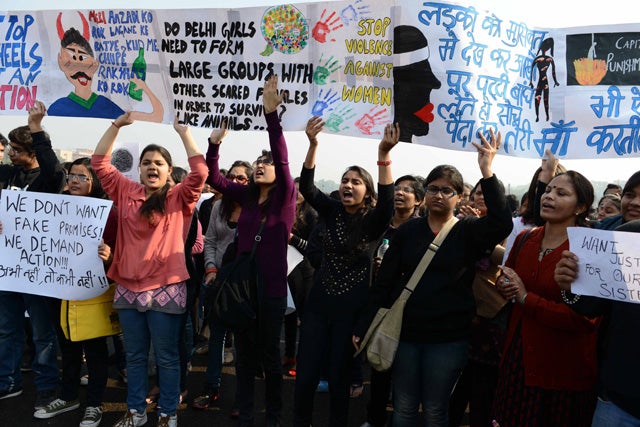 Photo: REX USA/Excel Media/Rex.
Four men were convicted of the fatal December 2012 gang rape of a 23-year-old student earlier today in New Delhi, a brutal case that shocked both India and the world. Judge Yogesh Khanna found the defendants Mukesh Singh, Vinay Sharma, Pawan Gupta, and Akshay Kumar Singh guilty of kidnapping, rape, and murder. Their sentencing hearing is set for Wednesday, when they could face the death penalty or up to life imprisonment.
The physiotherapy student and a male friend had boarded a public bus in New Delhi on the night of December 16, unaware that it was being driven by joyriders. The driver and five other men on the bus proceeded to attack and assault the pair with a metal rod before dumping them half-naked on to the street. The woman died 13 days later, while her companion survived.
The sheer violence of the crime electrified a nation that faces a growing crisis of sexual assault: The National Crime Records Bureau of India recorded 585 cases of rape in New Delhi in 2012. The problem isn't restricted to the nation's capital, either. Less than three weeks ago, a photojournalist was gang-raped in Mumbai, considered one of the country's safer cities for women.
The turmoil surrounding the case has dominated both national and international news for the past ten months. Thousands of protesters clashed with police in the days that followed the incident, and a special government panel was set up to attempt to find some way to address this disturbing problem spiraling out of control. In March, the Indian government eventually altered its laws in order punish rapists more harshly. Indian law as it pertains to the protection of women is a hodgepodge of legacy colonial Indian Penal Code, patriarchal attitudes, and contemporary reforms. As such, "outraging the modesty of a woman," ill-defined for over a century, remains a crime in India. New laws address stalking, acid attacks, voyeurism, and a more expanded definition of rape, so that a lack of physical struggle now does not equal consent. Marital rape, however, is still legal — a noted exclusion that represents the lingering obstacles to more modern protections for Indian women. (BBC)
Latinx
We Need More Moms in Politics. But the Election Process Isn’t Bui...
Most of us have ideas of what makes a mama: she’s either pulling up to the school drop-off with a perfect manicure or barely holding it together. As if t
by Jessica Altagraci...
Abortion Access For All
In A Post-Roe World, Here’s What First-Time Voters...
Today is the first federal general Election Day since the Supreme Court voted to overturn Roe v. Wade, the landmark decision that protected a person’
by R29 Team
Somos Latinx
After Getting an Abortion in the US, This Mexican Activist Is Now...
Gente Power is a monthly Somos series profiling the Latine activists, cultural workers, educators, and movement leaders creating change in their communitie
by Elsa Cavazos
Advertisement
Somos Latinx
Dominicans Protested the Violence of Christopher Columbus Celebra...
The UNESCO World Heritage agency describes Santo Domingo not only as the capital of the Dominican Republic, but of the West Indies historically, and romant
by Marjua Estevez
Unbothered
If Your Feelings About The Queen’s Death Are Complicated, That...
On September 8, Her Majesty Queen Elizabeth II passed away at the age of 96, after 70 years as the nation and commonwealth’s monarch. In the days sin
by L'Oréal Blackett
Unbothered
The Most Disrespected Group Online Are Black Women — This CEO Is ...
“The most disrespected person in America is the Black woman…” said civil rights leader Malcolm X, more than 50 years ago. Speaking directly to Black
by L'Oréal Blackett
Abortion
Why Kamala Harris Feels ‘Optimistic’ About The Future...
It wasn’t hard to see the symbolism in the torrential rains that preceded Vice President Kamala Harris’s visit to Indianapolis, IN, on July 25. One mon
by Molly Longman
Unbothered
Why I’m Only A Black Woman On Sundays
I am only a Black woman on Sundays.  Let me clarify.  I am a 21-year-old Black nonbinary person. I was assigned female at birth. My pronouns are
by Reegan Saunders
Unbothered
Mo Farah Bravely Told Us Who He Really Is — Now All Trafficking V...
How do you tell people that you are not actually who they think you are? This week, world-famous British sportsman Mo Farah did so, taking the brave step o
by Banseka Kayembe
Abortion Access For All
“A Minor Victory.” Abortion Care Resumes In Three Trigger States ...
The article is being updated as more news about temporary injunctions and restraining orders impacting abortion access comes out. It was originally publish
by Molly Longman
Unbothered
On Ketanji Brown Jackson, ‘Making History,’ And The Expense Of Bl...
Update: Justice Ketanji Brown Jackson has been sworn in to the Supreme Court as the first Black woman sitting on the nation’s highest court. Jackson
by Brea Baker
Abortion
Support Abortion Access With R29’s Capsule Tee Collection
As of June 24, our constitutional right to abortion no longer exists. It’s hard not to feel helpless, angry, and scared during a time like this, but for
by Elizabeth Gulino
Advertisement
Advertisement
Discover
R29 Stories & News
Watch
R29 Original Series & Films
Shop
R29's Most Wanted