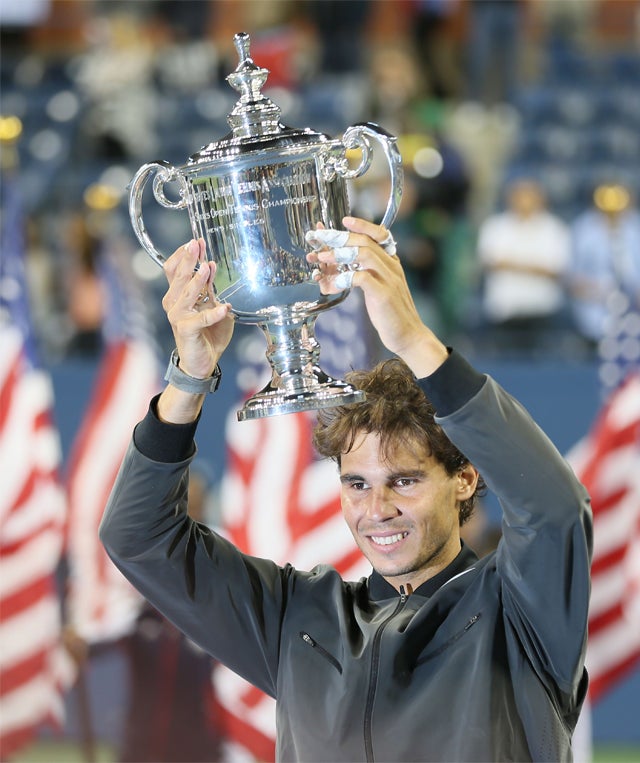 Photo: REX USA/Juergen Hasenkopf/Rex.
Last night in the Arthur Ashe Stadium in Flushing Meadows, Rafael Nadal took home his second US Open and thirteenth Grand Slam title against Novak Djokovic. It was only the latest chapter in the ongoing rivalry between Nadal and Djokovic, who bested the Majorcan champ at the Open last year, before losing out the Grand Slam to Andy Murray. In 2011, however, the Serbian top-ranked player handed Nadal a victory.
The pair have reached the upper limits of match length before, at the 2012 Australian Open, playing for nearly six hours. Monday's match, however, ended at about three-and-a-half, with Nadal beating Djokovic 6-2, 3-6, 6-4, 6-1. Nadal's 26-year-old rival is ranked number one in the world by the Association of Tennis Professionals, while Nadal was once seen as a long-shot for a place in among the sport's top players. But his performance has sports commentators constantly tracking his continued upward trajectory, as Nadal blasts his way into the territory of tennis' all-time greats.
Only Roger Federer and Pete Sampras lead Nadal in number of Grand Slam titles, with 17 and 14 respectively. But perhaps even more impressive is Nadal's undefeated 22-win streak this season. And that $3.6 million in US Open prize money? Nothing to sneeze at, either. (CBS Sports)
Unbothered
Russian Court Denies Brittney Griner’s Appeal, Upholds 9-Ye...
UPDATE: On Tuesday (Oct 25), a Russian court rejected WNBA star Brittney Griner’s appeal of her nine-year prison sentence for drug charges. After the
by Ineye Komonibo
Unbothered
Say Goodbye To Macy Gray — She Outed Herself As A TERF
On July 4, a day when selective freedom was celebrated in America, it was only fitting that Macy Gray chose to go on known bigot Piers Morgan’s show Unce
by Wisdom Iheanyichukwu
Unbothered
White Supremacy Is To Blame For The Buffalo Massacre. That’s It.
A clip of CNN reporter Victor Blackwell breaking down in tears live on air while talking about last weekend’s horrific massacre of 10 Black people in a B
by Kathleen Newman-B...
Advertisement
Unbothered
Megan Thee Stallion’s Bombshell New Interview Reveals Devastating...
In July 2020, Megan thee Stallion was involved in an intense police stop after attending a celebrity pool party in Los Angeles, leading to the shocking rev
by Ineye Komonibo
Unbothered
Ari Lennox Shares An Update After Her Amsterdam Arrest
Updated December 2, 2019: Days after being detained at Schiphol Airport in the Netherlands, Ari Lennox has resurfaced on social media to give worried frien
by Ineye Komonibo
Unbothered
Two Men Convicted For The 1965 Assassination Of Malcolm X Have Be...
Nearly 60 years after the shocking assassination of civil rights leader Malcolm X, a new development in the investigation into his murder has led to t
by Ineye Komonibo
Unbothered
The Zombification of Whitney Houston
In Haitian mythology, the idea of what we now call zombies emerged from enslaved Africans’ deepest fear: not even death would bring freedom. Though suici
by Brooke Obie
Unbothered
Actually, Netflix, Content Like Dave Chappelle’s Transphobic Come...
Update: Netflix has fired the employee who was organizing an upcoming walkout (set to happen Wednesday, October 20) of trans staffers and allies in protest
by Kathleen Newman-B...
Unbothered
Years After Her Death, The Science Community Is Still Treating He...
In the 1950s, a Black woman named Henrietta Lacks walked into Johns Hopkins Hospital to be treated for cervical cancer, and her cells would go on to b
by Ineye Komonibo
Somos Libres
Why Black Puerto Rican Women Are Leading an Anti-Racist Media Ren...
While the 2020 Census was essential to many communities across the United States, it held a different meaning for Puerto Ricans. Battered after a decades-l
by Frances Solá-Sant...
Unbothered
R. Kelly Facing Life In Prison After Being Found Guilty Of Racket...
This story contains discussion of sexual violence. Please proceed with care. Updated September 27, 2021: Months after being charged and indicted for nine g
by Ineye Komonibo
Unbothered
Jennifer Hough’s First On-Air Interview About Nicki Minaj &...
*Editor’s note: this story contains discussions about sexual violence, threats, and intimidation. Please read with care.  A month after publicly all
by R29 Unbothered
Advertisement
Advertisement
Discover
R29 Stories & News
Watch
R29 Original Series & Films
Shop
R29's Most Wanted