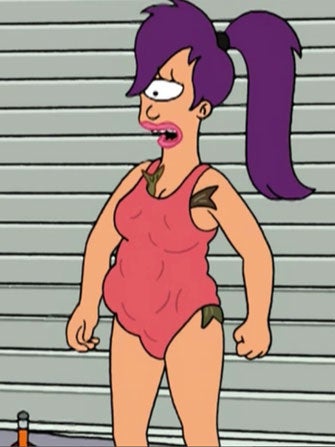 Photo: Via Netflix
My life has been plagued by mispronunciation, and I've gotten everything from "Layla" to "Lila" to "Veela" (don't ask). And usually, once I clarify how my name is said, I generally get sung Eric Clapton's "Layla." Two things: I just met you, and I definitely don't have you on your knees. Secondly, that's not even how you say my name. Then, about 10 years ago, something changed. People started saying, "Oh yeah, like that one-eyed character from Futurama!" Suddenly, it became an immediate bellwether as to whether or not we'd get along. If you began to sing me Clapton, prospects didn't look good, but if you evoked the tough, zinger-delivering pilot from Matt Groening's space series, we might get on just fine.
Advertisement
Now, I'm going to say something that may be downright blasphemy. The Simpsons has higher highs, but Futurama might be the better show. It's true. It has a type of dryness and intelligence that just works over the long term. And at the center of the animated space comedy stands its heart: the cyclops alien-then-mutant Turanga Leela. She is not only the physical brawn of the Futurama team, but she is also the emotional one, enjoying kicking ass as much as she does saving "helpwess widdle animals." In fact, probably due to the fact that she is the stand-in for competence, she consistently saves everyone.
The appeal of The Simpsons is universal and family-based. But what makes Futurama such a great show is that it speaks to those who are still finding their way in life. Leela, Fry, Amy, and Bender all embrace their gender tropes, but also constantly turn them on their heads. The girls can be reduced to giggles with flowers or male flattery, and the guys can be slack-jawed jerks when an attractive woman comes around, but the flipping of those stereotypes is a constant source of humor. (See below.) Which means that Leela is a stereotypical female, but simultaneously anything but. She is both an alien (and then a mutant) — and the most relatable character on the show. As she says, "Well, you obviously won't listen to reason, so I guess I'll listen to idiotic-ness and come with you."
Even though the will-they-won't-they nature of Fry and Leela's relationship is a focal point of the show, Leela never becomes a mere love interest — and, this may be one girl with the same name's opinion, but the Leela/Fry pairing is so heartfelt and charming (and foreshadowed, as she quits her job for him in the first season!) that I'm just suckered in.
So here's to Leela, the constant straight woman in a futuristic world of nuttiness, a character whom I feel like I know well but can't sum up quickly. Because, over 10 seasons, I've watched her grow, evolve, and even mutate into a weird tentacle monster. And now that Futurama is over (though, with that show, who knows...), I hope that I can still share my name with a purple-haired, intensely strong, one-eyed cartoon character, with both a sense of humor and humanity.

Photo: Via Netflix
Movies
Tyler Perry Makes A Pivot With A Jazzman’s Blues — But Doe...
This story contains spoilers for Netflix film A Jazzman’s Blues. Just months after resurrecting Madea for a film that no one asked for (Madea as Beyoncé
by Ineye Komonibo
Unbothered
The Problem With How We’re Talking About The Nia Long & Ime Udoka...
For as long as I can remember, Nia Long has been the woman of everyone’s dreams. She’s played some of the most adored characters in Black cinema, and h
by Tayo Bero
Movies
Don’t Worry Darling Can’t Overcome The Rumors
Spoilers ahead. In the world of Don’t Worry Darling’s Victory, a sun-cloaked desert planned community, 1950s-era gender roles are alive and things aren
by Katherine Singh
Advertisement
Unbothered
Sanaa Lathan Is A Director Now & On The Come Up Is Her T...
Welcome to “What’s Good,” a column where we break down what’s soothing, distracting, or just plain good in the streaming world with a “rooting fo
by Kathleen Newman-B...
Disney
How To Score A Disney+ Subscription (Even If It’s Just For ...
I say “Disney” you say “land,” or “world,” or perhaps now during the height of at-home streaming, you chime “plus
by Alexandra Polk
Unbothered
John Boyega Says He Only Dates Black Women — What’s The Issue?
British-Nigerian actor John Boyega is the latest subject of online discourse this week, and surprisingly, it’s not because of his stellar (and thirst-ind
by Ineye Komonibo
Dedicated Feature
This New Horror Film Will Give You A Fear Of… Smiles
When it comes to horror movies, there isn’t a whole lot that we haven’t seen: mask-wearing killers, extraterrestrial life, monsters that take on every
by Andrea Cheng
Unbothered
Bravo’s Real Girlfriends in Paris — Like Emily In Paris...
When Emily in Paris premiered on Netflix in 2020, audiences excitedly tapped into plucky protagonist Emily Cooper’s (Lily Collins) quarter-life crisis as
by Ineye Komonibo
Somos Latinx
Jessie Reyez Finds Healing On YESSIE — & You Will, Too
Ten seconds into Jessie Reyez’s debut album, “Before Love Came to Kill Us,” she sings, “I should’ve fucked your friends. / It would’ve been the
by Brenda Barrientos
Movies
Do Revenge Wants You To Embrace Your ‘Glennergy’
Spoilers ahead. When Drea Torres (Camila Mendes) and Eleanor Levetan (Maya Hawke) first pair up in Netflix’s Do Revenge, they’re raging. They’ve
by Katherine Singh
Mi Casa Es
Oye Mi Canto: The Nostalgic Music That Cures Our Homesickness
Music is a powerful catalyst in evoking memories of a time and place that’s far away. In the 2017 Oscar-winning animated fantasy “Coco,” it’s the s
by Marjua Estevez
TV Shows
Tell Me Lies Episode 4 Sex Scene Shows Why We Need Enthu...
Tell Me Lies might seem like a young woman’s sexual fantasy of a college relationship. After all, the first time Lucy (Grace Van Patten) and Stephen (Jac
by Olivia Truffaut-Wong
Advertisement
Advertisement
Discover
R29 Stories & News
Watch
R29 Original Series & Films
Shop
R29's Most Wanted