Skip navigation!
Story from Entertainment
Many raised an eyebrow at the idea of rebooting Paul Verhoeven's classic RoboCop. But, today's release of the trailer has audiences itching for the release of the new José Padilha film. Starring Joel Kinnaman of AMC's The Killing, this new RoboCop looks sleek, shiny, and more complex than the original. Don't be fooled, as there are still plenty of high-tech devices and big-budget explosions. But, the plot centers on Alex Murphy/RoboCop as a conflicted human, despite the fact that he's part machine. Even more intriguing, Padilha seems to have been influenced by current events. Many critics note the RoboCop reboot's plot line seems to reflect the plight of injured servicemen who returned from Iraq and Afghanistan changed, in more ways than one.
Audiences are sure to enjoy the myriad cameos scattered throughout, including Michael Keaton, Samuel L. Jackson, and the always-creepy Jackie Earle Haley in a villainous role. Even for viewers who never saw the original, this update is pretty exciting. Until the release on February 7, 2014, we at least have this killer trailer to tide us over. Trust, it's worth a re-watch. (Eonline) 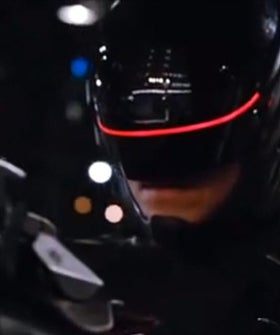 Image: via Eonline
TV & Netflix
Netflix’s Heartstopper Shows The Beauty Of Gay-Straight ...
By now, you’re probably aware of Netflix’s Heartstopper, an incredibly heartwarming coming-of-age television show about queer romance. Yes, the budding
by Chichi Offor
GG Good Game
Yes, You Are A Gamer Even If You Only Play Animal Crossing
it's affecting a lot of women who like to — and want to — participate in gaming culture.
by Katherine Singh
Unbothered
Heat Things Up With Simon & Schuster And Unbothered’s Black Love ...
What makes a good soundtrack to a love story? That’s the question we asked authors Ashley M. Coleman (Good Morning, Love), Ebony LaDelle (Love Radio), an
by R29 Unbothered
Advertisement
Entertainment
New Netflix Series Savage Beauty Tackles The Global Colori...
This story includes spoilers for Netflix series Savage Beauty. In the wake of the overwhelming success of popular series Blood & Water, Netflix’s cat
by Ineye Komonibo
Entertainment
Laverne Cox’s Barbie Couldn’t Have Come At A More Critical Time
After a Barbie-less childhood and on the advice of her therapist, Laverne Cox bought her first doll of the iconic American toy brand in 2010 — at the age
by Katherine Singh
Unbothered
How The Black Pearsons Became The First Family Of This Is Us<...
For six years, the Pearson family of 'This Is Us' have broken our hearts — and healed us — all at the same time. This is an oral history of the Black
by Kathleen Newman-B...
Entertainment
Francia Raísa Gets Grown: The How I Met Your Father Star...
“Thursday is the new Saturday,” Francia Raísa declares as soon as we get on the phone. “Friday is the day to chill. Let’s be real.”  She ha
by Mekita Rivas
TV Shows
In Conversations With Friends, Everyone’s Insufferable
Deep into Hulu’s Conversations With Friends, there comes a moment of reckoning. Frances (Alison Oliver) — a Dublin-based university student in her earl
by Katherine Singh
TV Shows
The Flight Attendant’s Cassie Is An Example Of White Pri...
In the season 2 premiere of The Flight Attendant, Cassie Bowden (Kaley Cuoco) is still working as a flight attendant for Imperial Atlantic, but now she’s
by Harika Manne
Unbothered
White Supremacy Is To Blame For The Buffalo Massacre. That’s It.
A clip of CNN reporter Victor Blackwell breaking down in tears live on air while talking about last weekend’s horrific massacre of 10 Black people in a B
by Kathleen Newman-B...
Unbothered
Kendrick Lamar Made His New Album For Himself — Not Us
After the 2017 release of his Grammy-winning album DAMN, Kendrick Lamar seemingly vanished into thin air, leaving fans begrudgingly stuck in a loop of list
by Ineye Komonibo
Unbothered
The Wilds Season 2 & TV’s War On “Woke” Characters
Welcome to “What’s Good,” where we break down what’s soothing, distracting, or just plain good in the streaming world with a “rooting for everybo
by Kathleen Newman-B...
Advertisement
Advertisement
Discover
R29 Stories & News
Watch
R29 Original Series & Films
Shop
R29's Most Wanted