Skip navigation!
Story from New York
Yes, fashion should be inclusive. But this more-is-more mentality that's been permeating New York Fashion Week of late has created an infamous "circus"of spectators, triggering its fair share of industry backlash. Such is the case with Oscar De La Renta. The designer, who staged two shows last year with nearly 650 guests total, will only put on one show for 350 this time around. The idea is to place an emphasis on his "professional audience" since "they shouldn’t have to go through 30,000 people, and 10,000 who are trying to take pictures of all of those people who are totally unrelated to the clothes.” He explains, “I hate to inconvenience other people, as I hope other people wouldn’t want to inconvenience me," meaning delaying the core crowd for later shows like Narciso Rodriguez's, which usually directly follows ODLR's. Aw! We appreciate Oscar's pre-planning, but what say you? Should the gang all be here? (Fashionista) 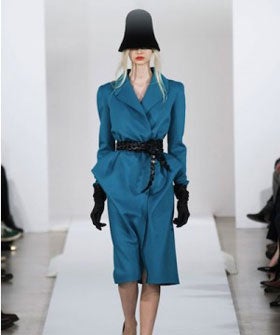 Photo Via: Fashionista
Designer Collaborations
H&M x Brock Collection Is Here — Shop Every Look Now
by Frances Solá-Sant...
Designers
Prabal Gurung’s New Collection Is A Look Back At The Y2K Party Scene
As one of New York Fashion Week’s quintessential designers, Prabal Gurung sure is happy New York City is back in action this summer.  On Wednesday,
by Frances Solá-Sant...
Style
Is This Little Black Box The New Little Black Dress?
QR codes found success during the pandemic when little else did. They replaced paper menus, credit and loyalty cards, and, in some cases, physical proof of
by Eliza Huber
Advertisement
Designers
Telfar Sport? The Designer’s Olympic Uniforms For Liberia Are Jus...
The Olympic games are finally kicking off this July, a year after it was originally scheduled to take place. And fashion’s Telfar Clemens, most known for
by Frances Solá-Sant...
Designers
Dior’s New Collection Makes A Case For Pairing Gowns With Sneakers
Last week, a New York Times article celebrated the return of high heels after a year of slippers and sneakers. But Dior’s latest collection screams, “N
by Frances Solá-Sant...
Style
Louis Vuitton’s Latest Show Featured A Futuristic Take On T...
On Tuesday, at a sculpture park outside of Paris, Nicolas Ghesquière presented his latest cruise collection for Louis Vuitton, the French fashion house he
by Eliza Huber
Designers
Teva’s “Ugly” Sandals Got Christian Cowan’s Glittery Stamp Of App...
Teva has the answer for shoppers looking to elevate their activewear game this summer. The go-to action sandal brand has partnered with British designer Ch
by Frances Solá-Sant...
Designers
Animal Models Take Over London In Stella McCartney’s Latest Campaign
Stella McCartney is no stranger to the ethical fashion movement. For years, the designer has advocated for cruelty-free fashion, refusing to use leather, s
by Frances Solá-Sant...
Style
Berriez & Abacaxi Teamed Up For A Plus-Size Tie-Dye Collection Th...
Just in time for the weekend, Brooklyn-based plus-size vintage shop Berriez and NYC-based designer Sheena Sood of Abacaxi released a plus-size capsule coll
by Eliza Huber
Style
The UGG x Telfar Collab Is Almost Here — Here’s How To Order It B...
It’s been nine months since Telfar Clemens, the designer behind the viral Shopping Bag, announced the UGG x Telfar collaboration. Now, we finally have th
by Eliza Huber
Designers
Gossip Girl’s Reboot Will Feature A Christopher John Roger...
Gossip Girl’s reboot is almost here, and so are the memorable fashion moments. Though one may think it’s hard to match Eric Daman’s costumes on the o
by Frances Solá-Sant...
Style
This Instagram-Favorite Brand Is Launching Swimwear — & It Includ...
On Thursday, Instagram’s favorite brand Miaou, known for its dalmation-print corsets and low-rise kick flares, announced the launch of its first-ever swi
by Eliza Huber
Advertisement
Advertisement
Discover
R29 Stories & News
Watch
R29 Original Series & Films
Shop
R29's Most Wanted