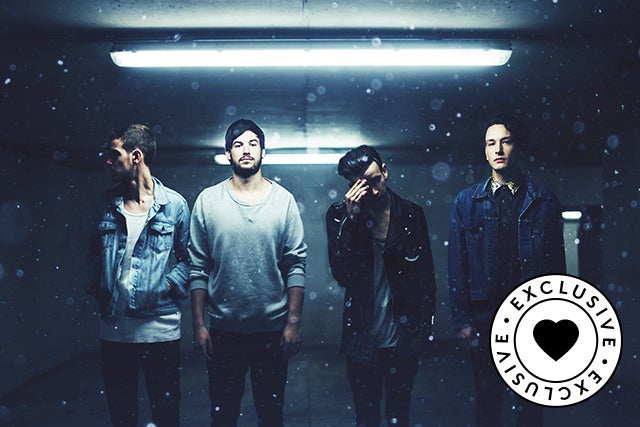 Photo: Courtesy of Vagrant Records/Interscope.
In a music scene that's so overly saturated with candy colors and formulaic builds and drops, it's refreshing to know there are still artists out there creating genuine rock tunes. You know, songs that harp back to the root of music making: the collective jam session.

Cue The 1975, the U.K's latest export answering the question: Where have all the good bands gone? Their four EPs (
Sex,
Music For Cars, Facedown, and IV) get right down to the pains and triumphs of spent youth. Each track they've released has a veiled sense of adulthood, but at the end of the day, each of The 1975's four band members are still reluctantly searching for a sense of self. It makes for a blissful music experience that deserves every bit of your attention. Thankfully, someone at Vagrant Records and Interscope felt the same, and their self-titled debut album drops September 3rd.

Advertisement
Before all of that, though, the boys stopped by the Myspace Log Cabin, and we've got an exclusive peek at their jam session below.
You know that moment when you discover a band that's just so — oh, what's the word — authentic? Your feet tap, your head bops, and that lightness of being all those intellectuals are always talking about seems tangible? Yeah, you can thank The 1975 for the breath of fresh air.
Do yourself a favor and pre-order the album here.
Advertisement
Pop Culture
Brad Pitt Plans The Best Dates, According To Dax Shepard
After their sweet run-in at the SAG Awards (and Netflix after party) this Sunday, the world is once again searching for sparks between Jennifer Aniston and
by Kaitlin Reilly
Pop Culture
Pamela Anderson Secretly Marries A Star Is Born Producer
Love can happen at any time — just ask Pamela Anderson. The Baywatch star recently married Jon Peters (the producer of critically-acclaimed film A Star I
by Ineye Komonibo
Entertainment
Taylor Swift Agrees Cats Is A “Weird-Ass Movie”
For a movie as CGI-ed as Cats, I assume the actors were just as surprised as we were when watching the musical adaptation for the first time. The Tom Hoope
by Kathryn Lindsay
Pop Culture
Archie’s Godparents, Tiggy Pettifer & Mark Dyer, Have Been ...
When Prince Harry and Meghan Markle celebrated the birth of their firstborn son Archie Harrison last May, the couple decided to forgo the usual protocol su
by Ineye Komonibo
Movies
Alison Brie’s Horse Girl Movie Is Actually AboutR...
When Netflix first announced the Horse Girl movie, I’m sure we all pictured the same thing: a My Friend Flicka meets Free Reign situation that you an
by Kathryn Lindsay
The Bachelor
The Bachelor Is In A “Genuine & Real” Crisis
“Cheers to being real as fuck,” Alayah Benavidez announces at the midpoint of her Bachelor “Week 3” rollercoaster. If this installment of The Bache
by Ariana Romero
Entertainment
Why Selena Gomez Made Sure Women Were All Over Her New Record, Fr...
There were some huge moments for women in music in 2019. Billie Eilish became the youngest woman ever to be nominated for all four of the top Grammy Awards
by Courtney E. Smith
Pop Culture
Prince Harry & Meghan Markle Have Officially Begun Living Their N...
Prince Harry and Meghan Markle’s royal version of retirement has officially kicked off — and it sounds so idyllic. While Meghan left for Canada in
by Kathryn Lindsay
TV Shows
The Bachelor Season 24, Episode 3 Recap: And You Thought C...
Tonight on The Bachelor, Champagne Gate is out and Alayah Might Be Fake Gate is in. (It doesn’t have the same ring to it. What can you do?) This episode
by Lia Beck
TV Shows
Who Is The Country Singer Getting Victoria F All Flustered In Tha...
Three weeks into The Bachelor and things are already pretty dramatic — but a one-on-one date between Peter and Victoria F. next week has the potenti
by Nicole Pomarico
TV Shows
People Think The Bachelor’s Victoria P. Is The Secon...
If you watch them all, after a while all of the people on the umpteenth seasons of The Bachelor and The Bachelorette start to run together. We’ve all
by Lindsay Denninger
TV & Netflix
Tyler Perry’s A Fall From Grace Is Getting Dragged...
At this point, I don’t know who’s having the harder fall from grace, Tyler’s Perry’s new movie or Tyler Perry himself. Since A Fall From Grace’s
by Alexis Reliford
Discover
R29 Stories & News
Watch
R29 Original Series & Films
Shop
R29's Most Wanted