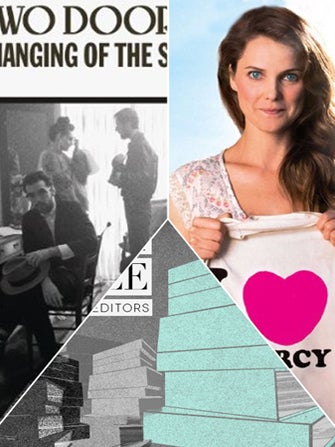 Photo: Courtesy of Two Door Cinema Club; Sony Pictures Classics; The Riveter.
It's Sunday FUNday again, which means it's time for another R29 editor to share the new books, TV, movies, and music that have her (or him!) excited for the week ahead. Today, Diana Nguyen, our senior editor, is stepping up.
A mild case of viral meningitis has kept me out of the loop recently, but there's nothing a little women-empowering journalism, a campy Austen-filled comedy, and a synthpop jam won't cure — yes, even a fever, headaches, and endearing-yet-hypochondriac R29 desk mates. My prescription for a happy, healthy Sunday, right this way...

Read: The Riveter Magazine
It's no shocker: In a world where breaking news can travel in less than 140 characters, print — and specifically, long-form journalism — has been struggling to compete. Well, new blood has entered the arena. Started as a $2,000 crowd-funded project by Missouri School of Journalism graduates Kaylen Ralph and Joanna Demkiewicz, The Riveter is a new print and online publication of original columns and personal essays for women, by women.

Advertisement
The mag is only one issue in, but its debut definitely makes a stand. Pieces of note: An empowering, Lean In-esque column by Joanna Scutts about the dismal number of female editors in the industry and a provocative essay on how much importance women put on age. "There’s an addictive nervous energy in feeling like you’re too young for what you’re doing," writes Gabrielle Lipton. "As if it’s illegal." Interesting, no? And, if you have the time, read this interview with the founding ladies on Poynter. Are you a woman? Writer? Both? This read will make you proud.

Watch: Austenland
I have no shame in admitting this: A big reason why I love Pride and Prejudice is thanks to the stubborn, ruggedly handsome, hopeful romantic known as Mr. Darcy. Sure, Austen's literary commentary on the mundane, trivial life of early 19th century English society is fascinating, poignant, and ahead of her time. But — it's Pemberley's finest who has set the bar so high that no modern-day man — or even fictional heartthrob (Edward Cullen, who?) — will ever live up to expectations. Yes, I fully embrace the spinster-chic life of a single lady in the city, thanks.

Though, I'm much more realistic than Austenland's leading lady, Jane Hayes, played by Kerri Russell. A prototypical single woman searching for epic love in a hopeless place, she has such an unhealthy obsession with all things Austen that her 21st century suitors leave little to be desired. Thus, like any real Austen fan should never do, she forfeits her entire savings to fly to England and role-play like she's living in Austen's era (think LARP but with love triangles and stage coaches). Sure, it lacks any real depth or life-changing takeaway, but Russell brings back a little bit of the neurosis that made Felicity so relatable — which deserves a watch in of itself. And, in the end [spoiler alert!], girl gets boy — with her dignity intact. What else could an Austen groupie ask for?
Play: Two Door Cinema Club's "Changing Of The Seasons"
Whether you're just getting out of a relationship or excited for falling leaves and chilly temps, "Changing Of The Seasons" is the perfect song for these transitional times. With the help of French producer Madeon, the Irish trio has created a happy, electro-heavy anthem that will leave you closing out the summer in dance. It's bittersweet, but worth the listen!
Entertainment
Laverne Cox’s Barbie Couldn’t Have Come At A More Critical Time
After a Barbie-less childhood and on the advice of her therapist, Laverne Cox bought her first doll of the iconic American toy brand in 2010 — at the age
by Katherine Singh
Unbothered
How The Black Pearsons Became The First Family Of This Is Us<...
For six years, the Pearson family of 'This Is Us' have broken our hearts — and healed us — all at the same time. This is an oral history of the Black
by Kathleen Newman-B...
Entertainment
Francia Raísa Gets Grown: The How I Met Your Father Star...
“Thursday is the new Saturday,” Francia Raísa declares as soon as we get on the phone. “Friday is the day to chill. Let’s be real.”  She ha
by Mekita Rivas
Advertisement
TV Shows
In Conversations With Friends, Everyone’s Insufferable
Deep into Hulu’s Conversations With Friends, there comes a moment of reckoning. Frances (Alison Oliver) — a Dublin-based university student in her earl
by Katherine Singh
TV Shows
The Flight Attendant’s Cassie Is An Example Of White Pri...
In the season 2 premiere of The Flight Attendant, Cassie Bowden (Kaley Cuoco) is still working as a flight attendant for Imperial Atlantic, but now she’s
by Harika Manne
Unbothered
White Supremacy Is To Blame For The Buffalo Massacre. That’s It.
A clip of CNN reporter Victor Blackwell breaking down in tears live on air while talking about last weekend’s horrific massacre of 10 Black people in a B
by Kathleen Newman-B...
Unbothered
Kendrick Lamar Made His New Album For Himself — Not Us
After the 2017 release of his Grammy-winning album DAMN, Kendrick Lamar seemingly vanished into thin air, leaving fans begrudgingly stuck in a loop of list
by Ineye Komonibo
Unbothered
The Wilds Season 2 & TV’s War On “Woke” Characters
Welcome to “What’s Good,” where we break down what’s soothing, distracting, or just plain good in the streaming world with a “rooting for everybo
by Kathleen Newman-B...
Entertainment
Reality TV Is One Of The Most Feminist TV Formats Today. Hear Me Out
Reality TV is a genre that typically features women screaming at each other (The Real Housewives franchise), simpering and competing for the affections of
by Sirin Kale
Somos Latinx
Neruda on the Park Gets the Story of Gentrification in L...
Many have taken on the task to articulate the complexity and harm of gentrification in immigrant, mainly Black and Latine, communities. In just the past fe
by Lorraine Avila
Unbothered
You Loved Blood & Water — Here’s What Else African T...
by Ineye Komonibo
Not Your Token Asian
Chloe Kim’s Newest Trick: Breaking The Role Model Myth
For the two-time Olympic champion snowboarder, the pressure to be the best comes with the task of being a role model for an entire AAPI generation.
by Melissah Yang
Advertisement
Advertisement
Discover
R29 Stories & News
Watch
R29 Original Series & Films
Shop
R29's Most Wanted