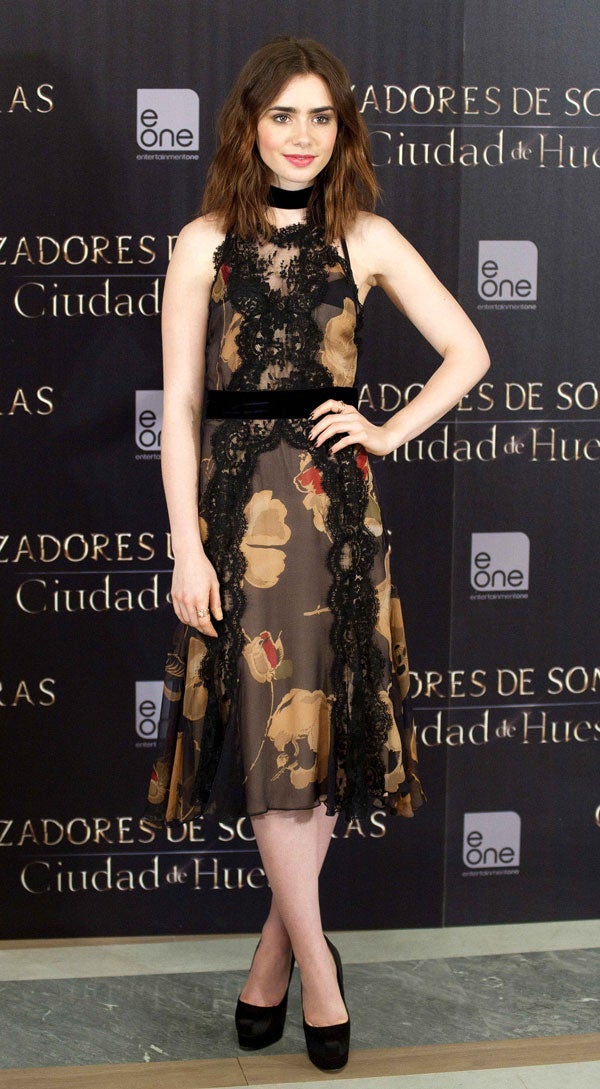 Photo: REX USA/BRAVO PRESS SA/REX
Lily Collins is puzzled — or a mixture of puzzled and amused. She can't quite figure out the fascination the fashion world has over a certain body part of hers. You know the ones — those two statement-makers that seem to kinda define her career. Yep, her brows. While Collins' eyebrows have become synonymous with the bold brow trend, she's not here to make beauty news. She just wants to act, and act she does.
Though Collins made her film debut just four short years ago, she has already accumulated an impressive range of roles, not to mention co-stars including Sandra Bullock, Julia Roberts, Julianne Moore, and Kathy Bates. However, it's her latest gig as demon-fighting Clary Fray in The Mortal Instruments: The City of Bones, the first film adaptation of Cassandra Clare's cult (and we do mean cult) favorite book series, that's helped her become a household name. (Kristen Stewart, you hear that?)
Advertisement
We were lucky enough to chat with Collins in the midst of her whirlwind European press tour to talk fashion, beauty, and how YA fiction does not need to have a shrinking violet heroine.

You're helping bring a book to life that many people have grown to love and adore. Do you have any books that are similarly near and dear to your heart that you would love to see translated into a movie?

"When I was younger, I was a big fan of Enid Blyton's stories: Adventures of the Wishing-Chair and The Wishing-Chair Again. Much like Harry Potter, those books were magical, but in a different way. There weren't any wands or wizards, but it was still a fantasy.

Also, it comes from a British author and she describes the setting so well. I grew up in England's countryside and there were sheep, cows, and farms — my imagination ran wild and you can feel it in those books."

There is an inevitable comparison of The Mortal Instruments to Twilight. Personally, we think Clary is a much more badass protagonist — do you agree?

"I agree. The thing about Clary that makes her different is that she is never a victim. She propels the story forward, and she isn't defined by the men in the story. The story is action and drama with a side of comedy. Clary can also be witty, which is important in a dark story."

What do you think it is about her strength that really sets her apart?

"Well, she goes on a single mission to save her mom, and that's her focus. It's totally badass because she's thrown all these love curves and she's still after the action."

The book series so far is looking at six titles, with an unknown amount of appearances by your character in any of the spin-offs that Cassie Clare is planning. Are you worried about getting tied down to such a big franchise?

"No, I was a huge fan of the books and I fell in love with the story and characters. I will be prepared to play Clary for as long as possible. But also, in something like this with sequels, you hope they continue to make them, but you can't really expect anything. I would rather just live in the moment."

"Well, they came to me with the project, so I didn't have to audition. I read the first book and became obsessed. When I found out they were making a movie, I made phone calls and wrote emails asking how I could get involved.

It turned out that I had worked with some of the people involved [in The Mortal Instruments] in a previous project, and they believed in me enough to give me the role. It was pretty amazing and a huge honor."

So, what was it like the first time you read with Jamie?

"Well, I don't remember how many readings I had done before Jamie, but I knew that after he came we didn't need to see any more — Jamie literally stole the show! When we started acting I felt like the Clary I wanted to create was born. She came alive as Jace came alive. It was a really cool experience." 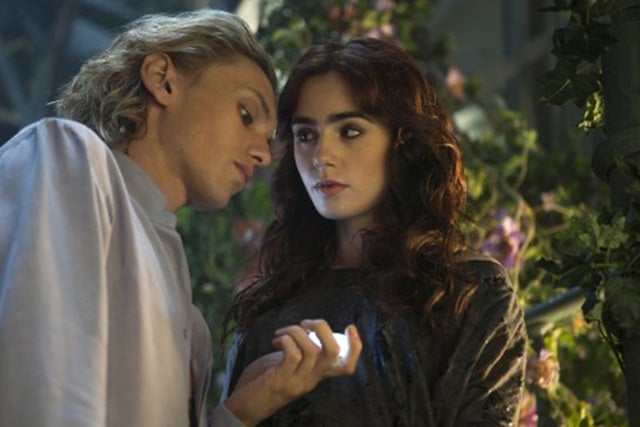 What’s the one product that can instantly refresh you or change the way you look?

"I love Lancome mascara. It lengthens and just makes my eye pop and look awake. It's especially helpful on busy days when I'm tired but need to look awake."

Got any other beauty secrets you swear by?

"I'm big on sunscreen. I learned that on Mirror Mirror. They were adamant about wearing a lot of sun protection and keeping my hands moisturized."

We heard you talking about your eyebrow's Twitter on Chelsea Lately. You seem to take it all in stride, but does it ever feel weird?
"Oh, it's totally weird. Very weird. It's become this mark, like it's 'my thing' — which is funny because everyone has eyebrows. It's ironic because I wasn't always confident about them when I was little and now they're my trademark. I think it's funny there's an entire Twitter account dedicated to one of my body parts, but you've got to laugh at it. It's not normal, but very complimentary."

We heard you’d tweezed your brows before and didn’t love it. Would you ever consider changing your gorgeous brow shape if the trend veered toward a less bold look?

"No, I don't care if it's a trend or not. It's part of who I am. I think maybe if a character role required me to I would consider it, but they're a part of my face. I wouldn't change them just because they weren't trendy anymore. I tweezed once when I was younger and it didn't go so well. I learn from my mistakes."

Crop tops seem to have become a staple in your wardrobe lately. Are they your current fashion obsession?

"Well, it's summertime everywhere we go, and I like crop tops. They're great in the heat. But honestly, they're lightweight and easy to pack. I had to bring about a million outfits on this press tour, and they take up less room in my suitcase."

What are some of your other style obsessions?

"I'm a big, big fashion girl. I love blush-tone pinks right now. I also love mixing fabrics. And cutouts in outfits! You know, showing some skin but keeping it classy. There's definitely a way to do it."

Who are your favorite designers?

Pop Culture
Despite Their Rift, Meghan & Harry’s Daughter’s Name Has Major Ro...
Meghan and Harry, the Duchess and Duke of Sussex, confirmed via a spokesperson that they welcomed their second child on Friday, June 4. The baby, a girl, w
by Lauren Le Vine
Culture
Naomi Osaka And The Necessity Of Refusal
On Monday, tennis champion Naomi Osaka announced that she was withdrawing from the French Open tournament in order to protect her mental health. Days
by Breya Johnson
Entertainment News
The LAPD Is Investigating An Alarming Series Of Assault Allegatio...
This story contains details of sexual violence. Months after a series of disturbing allegations of sexual assault naming musicians and married couple T.I.
by Ineye Komonibo
Advertisement
Music
Billie Eilish “Never Wants to Post Again” After Photo...
Billie Eilish debuted a new look on the June cover of British Vogue that imploded the internet — and made her never want to post on social media again. T
by Natalie Morin
Unbothered
We Created Hollywood’s New Inclusion Rider — Here’s Why It’s Just...
Fanshen Cox and Kalpana Kotagal co-authored the Inclusion Rider. Cox is the head of strategic outreach at Pearl Street Films and co-host of the Webby nomin
by Fanshen Cox
Unbothered
DMX’s Death Has Exposed The Insensitivity That Still Surrounds Su...
Dis providing an opportunity to shift how audiences and the media engage with substance use, mental health, and the complications that arise with celebrity
by Sharine Taylor
Entertainment News
Johnny Depp Loses Appeal In Amber Heard Libel Case Amid Other Law...
Johnny Depp is dealing with another loss in his drawn out battle against the courts and ex-wife Amber Heard, losing his appeal against the UK High Court ju
by Ineye Komonibo
Entertainment
T.I. & Tiny Harris Deny Numerous Disturbing Claims Of Abuse & Rape
This story contains details of sexual violence. Musicians and married couple T.I. (real name Clifford Harris) and Tameka “Tiny” Harris are pote
by Ineye Komonibo
Entertainment News
FKA Twigs Shares Dark Details Of Her Abusive Relationship With Sh...
This story contains details of intimate partner violence. Months after revealing that her former relationship with Shia LaBeouf was allegedly wrought with
by Ineye Komonibo
Entertainment News
Dustin Diamond of Saved By The Bell Fame Is Dead At 44
Dustin Diamond, the actor best known as playing the quirky Screech on beloved ’90s NBC sitcom Saved By The Bell, died on February 1. He was 44. Accor
by Natalie Morin
Entertainment News
Hollywood Icon Cicely Tyson Dead At 96
Cicely Tyson, boundary-breaking and award-winning actress, died on Thursday, January 28, 2021. The beloved film star was 96 years old, and her cause of dea
by Ineye Komonibo
Entertainment
Mossimo Giannulli To Finish His Prison Sentence Behind Bars
Updated January 27, 2021: Despite the lengthy pleas of his legal team, Mossimo Giannulli will be spending the rest of his prison sentence inside of an actu
by Ineye Komonibo
Advertisement
Advertisement
Discover
R29 Stories & News
Watch
R29 Original Series & Films
Shop
R29's Most Wanted