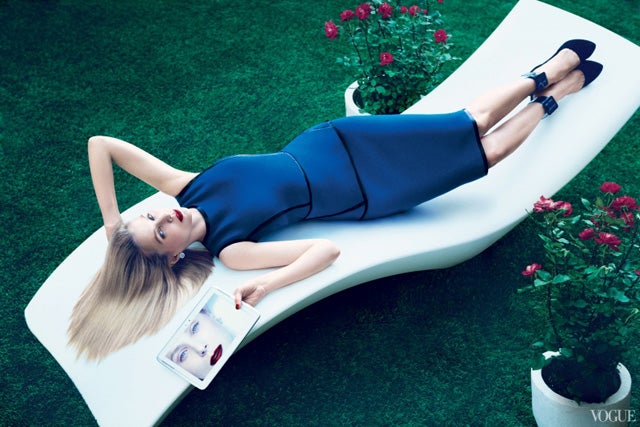 Photo: Mikael Jansson/Courtesy of Vogue.
With official re-branding less than a year underway, we're not really ready to call Yahoo! a cool, exciting player in tech again. But, we are very prepared to say that CEO Marissa Mayer is thoroughly awesome. Of course, as one of the most talked-about people in her industry and a figure changing the way women are perceived in STEM fields, that's kind of a no-brainer. But, Vogue's extensive profile on her seals the deal.
Instead of being treated to prefabricated company lines and truisms, this feels like a very enlightening and honest interview. Though it's obviously a relentlessly positive spin, the way Mayer talks about her life, her goals, and her career really gives the impression of someone with a genuine passion for her work. And, like many of us, that passion has sometimes gotten in the way of her family life. “One night," she recalls, "I looked up and was like, ‘Oh, my God, it’s midnight and I have a husband and I’m, like, eight months pregnant. I need to leave!’ I was just here working, having the best possible time. When Zack and I were brushing our teeth in the morning, he was like, ‘Where were you last night?’” She's like a modern Don Draper, except instead of getting drunk in her office and passing out on her couch, she was re-coding the DNA of an American giant.
Advertisement
Mayer also offers some insight into her choice to ban working from home at the company, which led some to say she was ignoring the needs of mothers who don't enjoy the resources she has to care for their young children. This is one instance where her nerdiness — usually endearing — manifests itself in a slightly naive way. She says she never meant it as some grand statement, just as a measure to increase efficiency and productivity. And, while the criticisms she received may have seemed obvious to some, perhaps for her, it's proof of the fact that she really is, as she claims, "gender blind."
She is also, apparently, blind to her title as head honcho and thus participates in nearly every decision at Yahoo!. While researching the piece, writer Jacob Weisberg sat in on a meeting for an unnamed new product and witnessed Mayer red-light a project based on usability problems, after reviewing everything down to the size of the navigation buttons. And, as Weisberg points out, it might sound like micro-managing, but somehow, she's making it work. As Mayer herself points out, employees seem happier over all — or, at least, they've “stopped leaking my e-mails."
One thing we would note? Well, if this were any other (male) CEO, he wouldn't be stretched out invitingly on a lounge chair. Granted, though, Larry Page just wouldn't quite have the same allure in that stance — much less that outfit. Questionable photo choice aside, do check out the full profile on Vogue.com, which treats her with all the respect she deserves. Needless to say, we highly recommend it.
Sustainability
Real People Share Their Favorite Reusable Water Bottle Brands
by Angela Tafoya
San Francisco
S.F.'s Best Cheap-Eats Spots (& What To Order)
by Lauren Sloss
Tech
8 Young Professionals Share Their Work Secrets
The tech industry is growing at a head-snapping pace, with a pool of talent that includes some of the world’s brightest innovators, movers, and shake
by Angela Tafoya
Advertisement
Hair
4 DIY Hairstyles That Take Unwashed Hair To The Next Level
In a dream world, we would all roll out of bed with perfectly imperfect hair. You know, like the stuff you see in rom-coms and on Kate Moss. But, let’s b
by Katie Nash
Work & Money
This Entire Company Got Totally Naked For April Fools’ Day ...
by Angela Tafoya
Books & Art
This Artist Endured 8 Hours Of Catcalling To Fight Sexual Harassment
by Natasha Young
San Francisco
What It’s REALLY Like To Be A San Francisco Barista
by Kelly Anne Bonner
San Francisco
Farm-To-Table Weed Exists — & It Comes In A Mason Jar
I get a text message alerting me that my marijuana delivery will be at my apartment in four minutes. “You can track your driver by clicking this link
by Matthew Latkiewicz
San Francisco
10 NSFW Moments From The World’s Biggest Leather Event
by Michele Bird
San Francisco
15 Chic Styles You’ll Want From Everlane Now
by Michele Bird
San Francisco
The 15 Most Beautiful Spots In San Francisco
by Michele Bird
Home
This San Francisco Home Has The Most Beautiful Travel Souvenirs
by Homepolish
Advertisement
Advertisement
Discover
R29 Stories & News
Watch
R29 Original Series & Films
Shop
R29's Most Wanted