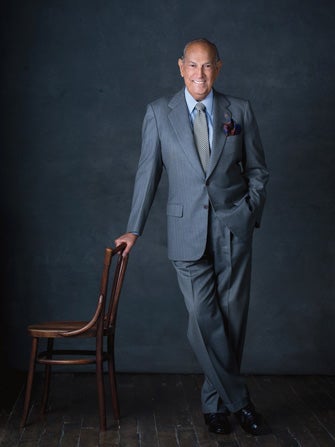 Photo: Via Women's Wear Daily
Oscar de la Renta set off a wave of controversy last winter when he appointed embattled-designer John Galliano to a three-week-long designer-in-residence position, and now it seems like he's looking to make things official. In a statement released yesterday, the OLDR team announced: "As we have said before, we are deeply impressed with John’s talent, and would love to find a way to work with him in the future. To date, we have not found that way." Cue the media firestorm.

It has been nearly two-and-a-half years since Galliano's infamous firing from Christian Dior as a result of his offensive anti-Semitic tirade, but for many in the industry, time has not healed all. The designer has been attempting some major damage control as of late (with appearances in
Vanity Fair
and on Charlie Rose), which we can only imagine is timed with a possible, permanent move to the American fashion house. De la Renta has actively denied rumors that Galliano will replace him, but it's clear that the two have a great working relationship, regardless of Galliano's past grievances.

"I strongly feel, regardless of what he did, that everyone in life does deserve a second chance," de la Renta told Fern Mallis in June. "And, I am happy that I was able to give John a second chance.…It would be a shame if the industry was deprived of such a talent." ODLR has been joined by key industry players like Jonathan Newhouse and Anna Wintour in his support of the designer, so we're not too surprised that Galliano may have finally found his way back to the biz. As for us, we're still not so sure — we're all for second chances, but these wounds still feel pretty darn fresh. In the end, we're hoping Galliano just lets his work (phenomenal as it is) speak for itself. (Women's Wear Daily)
Style
Chanel’s Punk-Inspired Show Featured Garter Bags, Harnesses & Fis...
Never underestimate the power of accessories. On Tuesday, Chanel presented its cruise ‘22 collection which, in addition to midriff-baring tweed sets and
by Eliza Huber
Style
Young Designers Get Ripped Off All The Time. Is There Any Way To ...
Borrowing from others has always been a part of fashion design. But ethically, legally, and creatively — it's small brands who suffer the most in this pr
by Eliza Huber
Style
The Target X Christopher John Rogers, ALEXIS & RIXO Lookbook Is H...
by Eliza Huber
Advertisement
Style
The Ganni x Ahluwalia Collab Is ‘90s-Inspired — & Made With Upcyc...
Update: The Ganni x Ahluwalia collection is now available for purchase on Ganni.com. This story was originally published on April 16, 2021. On Friday, Lond
by Eliza Huber
Style
Prabal Gurung’s New Bridal Line Includes A Corset Gown & A ...
by Eliza Huber
Style
Michael Kors’ 40th Anniversary Fashion Show Featured Naomi Campbe...
If you have missed Broadway, you’re not alone. On Tuesday, New York fashion mainstay Michael Kors celebrated his namesake brand’s 40th anniversary
by Eliza Huber
Style
Gucci & Balenciaga Teamed Up On The Runway — But Don’t Call...
The rumors are true: Gucci and Balenciaga teamed up (sort of), and the results were on full display in Gucci Aria, a film by Floria Sigismondi and Gucci
by Shannon Carlin
Style
Rejina Pyo’s Collab With & Other Stories Features This Seas...
Update: Rejina Pyo x & Other Stories is now available to shop on stories.com. This story was originally published on April 14, 2021. Get ready to so
by Shannon Carlin
Style
Celine Agrees With TikTok: Skinny Jeans Are Out
When TikTok speaks, Celine listens. Well, at least, when Gen Z is speaking about skinny jeans being out. On Wednesday, Celine (virtually) presented its Win
by Shannon Carlin
Style
Get Ready To “Crave” The New White Castle x Telfar Un...
White Castle isn’t just serving up hamburgers, it’s serving up fashion looks, too. And it’s all thanks to White Castle’s new collab
by Shannon Carlin
Fashion
22 Fashion-Forward Places To Buy A Wedding Dress Online
by Irina Grechko
Climate
Here’s What It Takes For Fashion Brands To Be Sustainable. Can Th...
This story was originally published on September 25, 2020. By now, the fashion industry’s harmful effects on the environment are well-known. With natural
by Irina Grechko
Advertisement
Advertisement
Discover
R29 Stories & News
Watch
R29 Original Series & Films
Shop
R29's Most Wanted