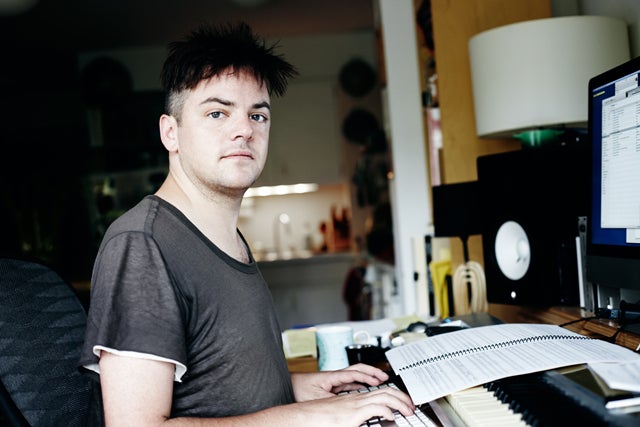 Photographed by Winnie Au
How many Lower East Side-inhabiting, Grizzly Bear-collaborating, brilliant young composers can you name? After an introduction to Nico Muhly, the answer’s at least one. Considered the It boy of classical music for years — earning a New Yorker profile and high praise from his elders along the way — the soon-to-be 32-year-old is everywhere, even if you don’t know it. He’s composed works for the American Ballet Theatre, illustrator Maira Kalman, choreographer Benjamin Millepied, among dozens of others. Plus, he’s a master collaborator, with Jónsi of Sigur Rós, Glen Hansard, and even Usher floating in his orbit.
Advertisement
To understand Muhly’s motivation is to flash back to the summer of 1993, when the Vermont-born pianist visited the Tanglewood Music Festival and realized music “was an actual thing you could do with your life and not just as a hobby,” he says. Now a New Yorker in love with the city’s creative spaces — “You can play a piece at Le Poisson Rouge or Carnegie or like the Music Hall of Williamsburg or even the Armory, and it always changes how the piece sounds…in a good way!” — Muhly saw his opera Two Boys, about an online friendship gone horribly awry, takes to the Metropolitan Opera stage this fall (seven performances from October 21st through November 14th.) And he’s taking on another challenge this fall, scoring Millipied’s newest dance premiere for the New York City Ballet’s fashion gala. The erudite musician — he earned an English-lit degree from Columbia, where he worked with Philip Glass, and a master's in music from Juilliard — says he’s “nightmarishly hard” on himself, but that does explain his dazzling array of projects. “I really value doing a million different things at once,” he says. “It’s a kind of restless and manic curiosity that isn’t always a good thing.” Get inside Muhly’s ultra-inquisitive mind below. 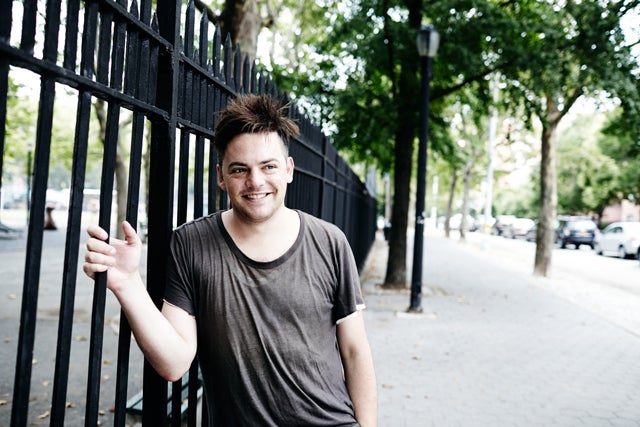 “I started composing when I was like 10; I had been singing in a church choir in Providence, RI, and was taking piano lessons like all good little boys. I wasn’t particularly talented at either, but then suddenly one spring, everything sort of emulsified, and I was wildly in love with all the music I was playing and singing. This immediately turned into me writing things down, little improvisations that then started having shapes.”

“I’ve found that cooking is always good, because it imposes a ministructure on the day: Rotate the meat in its marinade, skim the stock, chill the prosecco. But less glamorously, cooking is a sort of [an] easily realizable goal inasmuch as the whole thing culminates in something that makes everybody really happy. Usually.”

“For me, collaborative situations are always a welcome change from the ‘blank slate’ kind of commissions, where people say, ‘Here’s a small pile of money, and give us 18 minutes of orchestra music.’ In general, making an arrangement for Grizzly Bear or Jónsi [from Sigur Rós] is like being asked to dress somebody: One doesn’t want to call attention to oneself but rather to the artist. So, it’s a sort of erasure of the composer/arranger. An opera is slightly different, because there are so many moving parts that there is a feeling of the sorcerer’s apprentice about it.”

“The thing that [Philip Glass] taught me is to surround yourself with a community of musicians and to make yourself useful. The composer is a part of — and responsible to — a community. That’s a radical change from the idea of the composer as romantic visionary taking ayahuasca in the woods and being an impossible genius.”

“For a year, I didn’t enter any competitions for new music, any weird grants, any awards. I worked for Philip, wrote sacred music, played piano for anybody who asked, wrote anything for anybody. It was terrifying, and I was kind of riding a wave of negativity after losing a million awards and grants the year before. Then to sort of take myself out of it was a huge risk. But it ended up being great, and I started making music that I knew I could get performed, because it was for friends and for people I knew.”

For more in-depth interviews with inspiring visionaries, click here.
Unbothered
Brittney Griner Sentenced To 9 Years In Russian Prison For Drug C...
After being detained by Russian police at Sheremetyevo Airport on drug allegations in February, WNBA athlete Brittney Griner has officially been sentenced
by Ineye Komonibo
Unbothered
Say Goodbye To Macy Gray — She Outed Herself As A TERF
On July 4, a day when selective freedom was celebrated in America, it was only fitting that Macy Gray chose to go on known bigot Piers Morgan’s show Unce
by Wisdom Iheanyichukwu
Unbothered
White Supremacy Is To Blame For The Buffalo Massacre. That’s It.
A clip of CNN reporter Victor Blackwell breaking down in tears live on air while talking about last weekend’s horrific massacre of 10 Black people in a B
by Kathleen Newman-B...
Advertisement
Unbothered
Megan Thee Stallion’s Bombshell New Interview Reveals Devastating...
In July 2020, Megan thee Stallion was involved in an intense police stop after attending a celebrity pool party in Los Angeles, leading to the shocking rev
by Ineye Komonibo
Unbothered
Ari Lennox Shares An Update After Her Amsterdam Arrest
Updated December 2, 2019: Days after being detained at Schiphol Airport in the Netherlands, Ari Lennox has resurfaced on social media to give worried frien
by Ineye Komonibo
Unbothered
Two Men Convicted For The 1965 Assassination Of Malcolm X Have Be...
Nearly 60 years after the shocking assassination of civil rights leader Malcolm X, a new development in the investigation into his murder has led to t
by Ineye Komonibo
Unbothered
The Zombification of Whitney Houston
In Haitian mythology, the idea of what we now call zombies emerged from enslaved Africans’ deepest fear: not even death would bring freedom. Though suici
by Brooke Obie
Unbothered
Actually, Netflix, Content Like Dave Chappelle’s Transphobic Come...
Update: Netflix has fired the employee who was organizing an upcoming walkout (set to happen Wednesday, October 20) of trans staffers and allies in protest
by Kathleen Newman-B...
Unbothered
Years After Her Death, The Science Community Is Still Treating He...
In the 1950s, a Black woman named Henrietta Lacks walked into Johns Hopkins Hospital to be treated for cervical cancer, and her cells would go on to b
by Ineye Komonibo
Somos Libres
Why Black Puerto Rican Women Are Leading an Anti-Racist Media Ren...
While the 2020 Census was essential to many communities across the United States, it held a different meaning for Puerto Ricans. Battered after a decades-l
by Frances Solá-Sant...
Unbothered
R. Kelly Facing Life In Prison After Being Found Guilty Of Racket...
This story contains discussion of sexual violence. Please proceed with care. Updated September 27, 2021: Months after being charged and indicted for nine g
by Ineye Komonibo
Unbothered
Jennifer Hough’s First On-Air Interview About Nicki Minaj &...
*Editor’s note: this story contains discussions about sexual violence, threats, and intimidation. Please read with care.  A month after publicly all
by R29 Unbothered
Advertisement
Advertisement
Discover
R29 Stories & News
Watch
R29 Original Series & Films
Shop
R29's Most Wanted