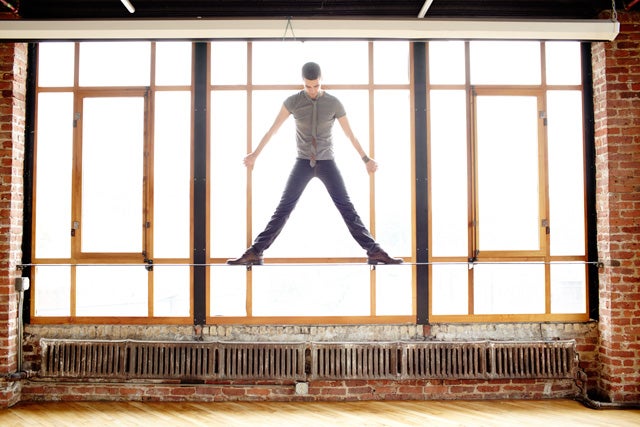 Photographed by Winnie Au
"I describe my work as ‘tunneling through media,'" says choreographer Jonah Bokaer, with media broadly defined as dance, video, drawing, animation, technology — you name it. The impossibly fit New York native excels at navigating traditional venues (his dances have been performed at the New Museum, MoMA PS1, and the Guggenheim, among others), but also it's expanding into uncharted waters. Last year, he helped create (and danced for) an iPad app, Fifth Wall, which makes the viewer feel like a gravity-defying Bokaer is dancing and sliding along the edge of the Apple device. He’s also taken father-son bonding to new heights with the spring production of The Ulysses Syndrome, which he performed with his 71-year-old father.
Advertisement
Bokaer always seemed a natural. At the age of 18, he became the youngest dancer ever to work with Merce Cunningham and did so while simultaneously studying visual and media studies at The New School, where he honed his animation skills — an invaluable trait for eye-popping choreography. A frequent collaborator with the artist Daniel Arsham (a fellow R29 Visionary), whom he compares to a brother, Bokaer’s passion project is to make choreography more accessible for everyone. Enter Chez Bushwick, his nonprofit focused on arts advocacy, and the Center for Performance Research (housed in the Brooklyn’s first LEED-gold building), cofounded by Bokaer and John Jasperse as an affordable space to support contemporary dance. His advice to acrobatic acolytes is "keep inventing, imagining, and presenting dance in new ways — and in your own ways." Read below to see how he’s bringing those new ways to 21st-century audiences everywhere. 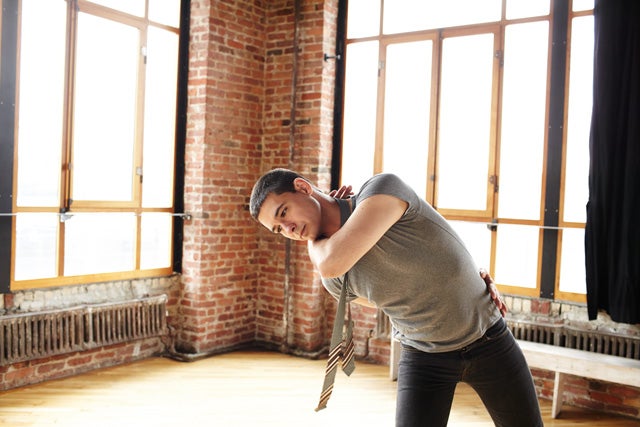 First Position
"I like to think of myself as an accident: some combination of the theatrical, filmic, and physical gifts from my parents and grandparents. My father was a filmmaker and screenwriter born in Tunisia, whose father was a champion gymnast in his native country. My mother is a second-generation theater director (born in the United States with Scottish/Welsh heritage), whose father was a prolific American director, Arthur Lithgow. Something about my parents gave our six siblings a sense of humanity and fearlessness. I think having parents from two different cultures was very pivotal: It taught me that making artwork and taking social action are inseparable."

Take the Lead
"Instead of a 'dance company,' we have four modes of working: solos, group choreographies (usually one to eight people), film or media works, opera (or let’s just say big, special projects). I could be wrong, but I definitely think this is different than how others are working today. It happens across different channels and requires different ideas about dance production. What inspires me most is the artist who goes back to zero, square one, every time, with the willingness to recreate their system all over again."

The Jurassic Diet
"Directors of a modern-dance company once advised me to lose weight. Which is fine — it was their company, they governed how they wished. But I also think dance companies are sort of a Jurassic creation. You could spend money preserving fossils, too, I suppose...but actually, fossils get better funding than dance companies."

Home on the Range
"There is one incredible secret to the work, which is the range of dancers. They are my heroes. They are not "diverse" in the unusual grant-proposal way, but look deeper: They hail from Taiwan, Israel, Croatia, U.K., now even Iceland and Canada. They're the reason to show up. Actually, maybe watching performers is my guilty pleasure. It's heaven."

Save the Last Dance
"I'm very thankful to be able to expand each year, continue developing, and keep inspiring others. Staying humble yet very driven is the best way to think about the future. The future holds lots of fun, lots of trouble, and lots of history...I hope people will sign on early enough to enjoy all three."

For more in-depth interviews with inspiring visionaries, click here.
Unbothered
Brittney Griner Sentenced To 9 Years In Russian Prison For Drug C...
After being detained by Russian police at Sheremetyevo Airport on drug allegations in February, WNBA athlete Brittney Griner has officially been sentenced
by Ineye Komonibo
Unbothered
Say Goodbye To Macy Gray — She Outed Herself As A TERF
On July 4, a day when selective freedom was celebrated in America, it was only fitting that Macy Gray chose to go on known bigot Piers Morgan’s show Unce
by Wisdom Iheanyichukwu
Unbothered
White Supremacy Is To Blame For The Buffalo Massacre. That’s It.
A clip of CNN reporter Victor Blackwell breaking down in tears live on air while talking about last weekend’s horrific massacre of 10 Black people in a B
by Kathleen Newman-B...
Advertisement
Unbothered
Megan Thee Stallion’s Bombshell New Interview Reveals Devastating...
In July 2020, Megan thee Stallion was involved in an intense police stop after attending a celebrity pool party in Los Angeles, leading to the shocking rev
by Ineye Komonibo
Unbothered
Ari Lennox Shares An Update After Her Amsterdam Arrest
Updated December 2, 2019: Days after being detained at Schiphol Airport in the Netherlands, Ari Lennox has resurfaced on social media to give worried frien
by Ineye Komonibo
Unbothered
Two Men Convicted For The 1965 Assassination Of Malcolm X Have Be...
Nearly 60 years after the shocking assassination of civil rights leader Malcolm X, a new development in the investigation into his murder has led to t
by Ineye Komonibo
Unbothered
The Zombification of Whitney Houston
In Haitian mythology, the idea of what we now call zombies emerged from enslaved Africans’ deepest fear: not even death would bring freedom. Though suici
by Brooke Obie
Unbothered
Actually, Netflix, Content Like Dave Chappelle’s Transphobic Come...
Update: Netflix has fired the employee who was organizing an upcoming walkout (set to happen Wednesday, October 20) of trans staffers and allies in protest
by Kathleen Newman-B...
Unbothered
Years After Her Death, The Science Community Is Still Treating He...
In the 1950s, a Black woman named Henrietta Lacks walked into Johns Hopkins Hospital to be treated for cervical cancer, and her cells would go on to b
by Ineye Komonibo
Somos Libres
Why Black Puerto Rican Women Are Leading an Anti-Racist Media Ren...
While the 2020 Census was essential to many communities across the United States, it held a different meaning for Puerto Ricans. Battered after a decades-l
by Frances Solá-Sant...
Unbothered
R. Kelly Facing Life In Prison After Being Found Guilty Of Racket...
This story contains discussion of sexual violence. Please proceed with care. Updated September 27, 2021: Months after being charged and indicted for nine g
by Ineye Komonibo
Unbothered
Jennifer Hough’s First On-Air Interview About Nicki Minaj &...
*Editor’s note: this story contains discussions about sexual violence, threats, and intimidation. Please read with care.  A month after publicly all
by R29 Unbothered
Advertisement
Advertisement
Discover
R29 Stories & News
Watch
R29 Original Series & Films
Shop
R29's Most Wanted