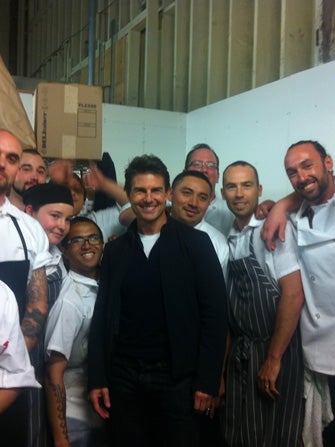 The S.F. streets have literally been flooded with star sightings as of late — from Natalie Portman and Kanye West to Joe Zee and Frances McDormand, it’s been a packed month for celeb appearances in the Bay. Well, we can add another looker to the ever-expanding roster of A-list city visitors.
An anonymous tipster spills the beans about none other than Tom Cruise’s visit to Waiheke Island Yacht Club at Pier 29 on Saturday. Apparently, the actor was in town dining with Warner Bros. execs and discussing a potential movie to be filmed in New Zealand, which just happens to be the theme of the fare served up at Waiheke. Cruise chowed on Moa Pale Ales, and a tasting menu that offered Leigh Snapper ceviche, Silver Fern Farms Silere Merino Lamb, and Coconut Fromage dessert — what a mouthful. We also hear Cruise was nothing but a gem, proving that even posing for a few pics with the staff was no mission impossible.

Meghan Markle
We Just Got Two Major Updates About Meghan Markle’s Lawsuit...
New developments in Meghan Markle’s ongoing lawsuit against Mail on Sunday have surfaced, further complicating the Duchess’ previous testimony and impa
by Ineye Komonibo
Documentary
Cheer‘s Jerry Harris Has Been Arrested & Charged W...
Update Sept. 17, 2020: Jerry Harris of the Emmy-nominated Netflix show Cheer has been arrested and charged with the production of child pornography. Accord
by Natalie Morin
Entertainment News
Migos’ Takeoff Denies Sexual Assault Allegations In New Sta...
Updated August 6, 2020: Takeoff has denied the accusations of rape made against him, calling the allegation “patently and provably false.” In a
by Ineye Komonibo
Pop Culture
Frank Ocean’s Younger Brother Ryan Breaux Killed In Car Acc...
Update August 6, 2020: Ryan Breaux’s mother, Katonya Breaux, publicly mourned the loss of her son on Instagram, after the 18-year-old was killed in a
by Natalie Morin
Voices of Disability
Say The Word: Disabled
One in four adults in the U.S. are living with a disability, but you wouldn’t know it given the lack of representation in the workforce, Hollywood, a
by Maysoon Zayid
Pop Culture
Hayden Panettiere Shares Abuse Hotline After Her Ex Is Arrested &...
Actress Hayden Panettiere’s ex-boyfriend Brian Hickerson was arrested on July 16 and charged with corporal injury on a spouse/cohabitant. Panettiere
by Natalie Morin
Entertainment News
A Body Has Been Found In The Lake Where Naya Rivera Went Missing
Update July 13, 2020: Ventura County’s investigation into the disappearance of Naya Rivera has led to the discovery of an unidentified body. Accordin
by Ineye Komonibo
Entertainment News
Police Are “Confident” They Have Found The Body Of Naya Rivera Af...
After days of actively searching for her body in Southern California’s Lake Piru, local police officers have confirmed that the body of Naya Rivera has b
by Ineye Komonibo
Entertainment
Actress Kelly Preston Dies At 57
At age 57, Kelly Preston has died. The Hollywood actress passed away yesterday after a two-year struggle with breast cancer that she and her family had dec
by Ineye Komonibo
Entertainment
Justin Bieber Denies Sexual Assault Allegations On Social Media
Days ago, Justin Bieber was accused of sexual assault in a now-deleted Twitter thread that detailed a harrowing encounter between the star and a fan in 201
by Ineye Komonibo
Entertainment News
Ansel Elgort Denies Allegations Of Sexual Assault In Apology To H...
Ansel Elgort has denied an allegation of sexual assault that appeared on Twitter last week. In it, Twitter user @Itsgabby accused the West Side Story actor
by Kathryn Lindsay
Entertainment News
Beyoncé Demands Justice In Passionate Letter As Breonna Taylor...
Your social media timelines may have resumed their normal activity following the trendy black squares, but the uprising against racism hasn’t lost an
by Ineye Komonibo
Discover
R29 Stories & News
Watch
R29 Original Series & Films
Shop
R29's Most Wanted