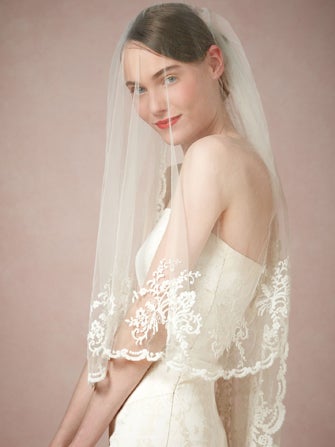 BHLDN Luella Veil, $450, available at BHLDN.
When it comes to feminism, it's always been our policy that it's all about choice. If you want your life to reflect more traditional gender roles and it's 100% your decision, then go for it. Same goes if you want to burn a pile of bras on a weekly basis and spell 'women' with a y. Either way, you do you, and don't judge anyone else if they opt for a different path. But when it comes to weddings, is there a "right" way to do it if you're a forward-thinking lady? The Daily Mail is salaciously documenting a new trend it calls "the rise of the feminist wedding," based on a survey of some 200 British brides conducted by Elki Parmar of WeddingDays.co.uk.
The findings include such mundane things like the fact that a quarter of the women surveyed plan to keep their names after marriage, and one in ten will wear a color other than white on their big day. However, results also showed that more and more women are rejecting veils and asking not to be given away on their walk down the aisle — though overall, 76% said they'd still take that time-honored stroll. There's no doubt that many of these traditions are rooted in a patriarchal structure that views women as property and insist that brides must be virgins, but we like to think that these days, we're advanced enough to reinterpret the very same conventions in a modern way. And there are certainly women out there who, regardless of tradition, would want to include their fathers in the ceremony for emotional reasons. What do you think? Does this trend sound just right to you, or are you balking at the very thought of ditching your fairytale ceremony? (The Daily Mail)
Advertisement
News
Why Advocates In New York Are Working To Repeal The 50-A Law
As the mass uprisings across the country continue, protestors and advocates are trying to hold public officials accountable for making real reforms. In New
by Elly Belle
News
Want To Defund The Police? Here’s How To Help
The movement to defund the police is gaining unprecedented support right now for good reason.
by Natalie Gontcharova
News
Who Is Really “Looting” America?
As thousands take to the streets to protest the death of George Floyd and other unarmed Black men and women killed by police and others, demonstrators are
by Sarah Midkiff
News
Police Are Beating People To The Ground To Enforce The Racist Curfew
Thousands of people across the country continue to protest racist police killings after ten days of unrest in the streets of U.S. cities. The actions have
by Erin Corbett
Donald Trump
America Is Facing A Third Amendment Crisis
The world is full of surprises ⁠— and amidst President Donald Trump declaring martial law and employing the National Guard against protestors, even Jam
by Elly Belle
Unbothered
Breonna Taylor Should Be Turning 27 Today. Here’s How To De...
Breonna Taylor should be turning 27 on Friday. Instead of having a party with her friends and loved ones, her birthday will be marked by people demanding j
by Britni de la Cretaz
News
Police Shootings Play A Major Role In National Gun Violence Stati...
Friday is National Gun Violence Awareness day, and this year police gun violence will be in the spotlight. For the last six years, a coalition of organizat
by Erin Corbett
News
Tom Cotton’s Op-Ed Puts Black Lives In Danger — & The Ne...
The New York Times staff could no longer hold their tongues. Over the years, the Times’ opinion section has run questionable — and sometimes downright
by Britni de la Cretaz
News
“Kettling” Is One Of The Most Violent Tactics Police ...
Hundreds of thousands of people have taken to the streets this week in every state with demands to abolish the police by defunding their departments. While
by Erin Corbett
News
Welcome To Hell, Donald & Melania Trump Will Be Your Guides
There are several places rumored to be entrances to the underworld, like the fiery crater that has been burning in Turkmenistan’s Karakum Desert for over
by Natalie Gontcharova
News
The Movement To Defund The Police Is Getting Stronger — Here̵...
Long before a Minneapolis police officer pinned his knee to George Floyd’s neck, slowly cutting off his air supply until he was dead, American cops were
by Brianna Provenzano
News
All Four Officers Will Be Charged In George Floyd’s Killing...
Over a week after the police killing of George Floyd and several days after manslaughter charges were brought against former office Derek Chauvin, Minneapo
by Leora Yashari
Discover
R29 Stories & News
Watch
R29 Original Series & Films
Shop
R29's Most Wanted