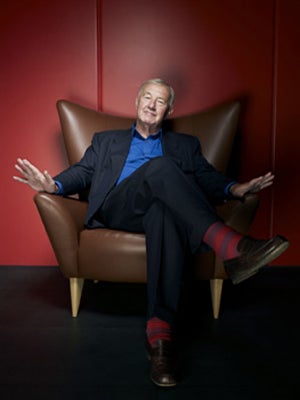 Flutes of Champagne, hors d'oeuvres, and artisanal popcorn passed around the room, while celebrities and industry insiders like Martha Stewart and Nina Garcia greet each other with smiles. Photogs and onlookers Instagramming their pictures. The music — a mix of top 40s and hip-hop — blares throughout the large NYC space showcasing jcp's newest home collaborations. And in the far corner, atop a cobalt-blue, scrolling-arm chair, like a king watching over his subjects, is Terence Conran.
Not a king, though, but an actual modern-day knight (he prefers to go by Sir Terence Conran), the 81-year-old designer, restaurateur, and entrepreneur looks tired, but surrounded by a tripod side table, wooden consoles, and other items from his Design by Conran collection for jcp, he is home. Plus, the free-flowing Scotch doesn't hurt. In a way, this is a dream come true. "I've always, since my early days, wanted to design products that were available to anybody," Conran says. When he first started his foray into interiors, only the wealthy could afford his pieces. And, now, after decades in the business, he can bring his midcentury-modern wonders to Americans via jcp for a fraction of the cost of his own designs — and that of contemporaries like Herman Miller.
Advertisement
But ever since what seems like the success of AMC's Mad Men, the fashion and decor industry has been overloaded with midcentury-modern trends, perhaps diluting the integrity and foundation of the design aesthetic. Does that bother the MidMo godfather? Not in the least. "What I've been doing for many, many years now has mass-market acceptance," says Conran. "It provides an opportunity for young Americans to pass down quality pieces to their children." You still have to value its purpose and not just its style or trend appeal.
The success of his brand has been based on a simple mantra: quality not quantity. "[My designs] are not pretentious or gimmicky. They are plain, simple, and useful," says Conran. It's not just about owning teak tables and Eames chairs for the sake of owning them. Ask yourself why you own them? Really embracing the aesthetic is to collect pieces that are both functional and comfortable. "After a hard day's work, you should be able to breathe easy, have a drink, and relax on a comfortable couch," he says. When shopping, look for "materials that are going to last, look at the construction, look at the fabric" — all these simple things will make the difference between a lifetime investment piece and a broken, stained piece of furniture set out on the sidewalk for trash collection. "In 60 years, I've realized the importance of high-quality design," Conran says. With that much experience, it's advice worth listening to.

Gift Guides
33 Calming Goods To Encourage Small Acts Of Self-Care
by Elizabeth Buxton
Memorial Day
Your Guide To The Best Memorial Day Furniture Sales Of 2022
by Alexandra Polk
Deals
16 Memorial Day Mattress Sales Already On Our Radar
In a world full of uncertainty, it’s the small things we’ve come to count on that bring us some much-needed relief — like, for instance, Memo
by Alexandra Polk
Advertisement
Most Wanted
Found: The Comfiest Chairs To WFH In
by Elizabeth Buxton
Hype Machine
The Best Weighted Blankets, According To Soothed Reviewers
by Elizabeth Buxton
Deals
Literally Everything Parachute Sells Is 20% Off — Here Are Our Ed...
Memorial Day is one of the best times of the year to buy a new mattress, but why stop there? (Or what if you already have a mattress you love?) The massive
by Mercedes Viera
Furniture Guide
The 17 Best Couches & Sofas That Feel As Good As They Look
by Alexandra Polk
Sustainability
29 Sustainable Bedding Brands (& Deals You Can Score On Them)
by Elizabeth Buxton
Dedicated Feature
Feeling *Meh* About Work? These 6 Home Office Design Hacks Might ...
Ask yourself: Have you lost track of which day of the week it is? Wasn’t it just Tuesday…and now it’s Tuesday again? Why does 10 a.m. feel like 5 p.m
by Eliza Dumais
Furniture Guide
8 Hanging Egg Chairs To Fulfill Your Human-Sized Nest Desires
I’m not sure exactly when or how it happened, but some time ago my boyfriend and I decided that our Miami digs were not complete without a hanging eg
by Karina Hoshikawa
Furniture Guide
Rattan Is The LBD Of Interior Design — Here Are 17 Worth-It Items
If you were to gab to a seasoned interior designer — hell, even an amateur one — that rattan furniture is taking over TikTok, boy would their eyes roll
by Alexandra Polk
Home
The Collab We Never Knew We Needed: Our Place & Selena Gomez
As the kids would say, we did not have actress, singer, and entrepreneur Selena Gomez collabing with Our Place on our 2022 bingo cards — but we accept it
by Alexandra Polk
Advertisement
Advertisement
Discover
R29 Stories & News
Watch
R29 Original Series & Films
Shop
R29's Most Wanted