Skip navigation!
Story from Sex
The battle of the sexes is something that has been raging as long as, well, the sexes. And, while we may be slightly biased towards our fellow females, a controversial new study is out to prove that women really are superior — at least when it comes to things like sharing and giving. According to research by professors Michael Dahl, Cristian Dezso, and David Gaddis Ross, a close relationship with a female (whether it be a sister, wife, or daughter) may be the secret to everything from male CEOs awarding higher wages to their employees, to doling out large charitable donations. The researchers found that daughters tend to soften fathers, and evoke a greater overall generosity. And, study participants with sisters tended to respond to ethical questions in a much more selfless way than those without.
Advertisement
If you're looking for proof of the more anecdotal variety, consider the story of Bill Gates. Although he has been one of the country's wealthiest men for decades, it wasn't until he met his wife that he started giving his money away. And, within two years of his daughter's birth he became the third most generous philanthropist in America. Gates has credited his wife and mother as being the strongest catalysts for his charity work, and Melinda has played a pivotal role in shaping their foundation's philanthropy.
Of course, this doesn't mean that our male counterparts are a lost cause. Instead, research has shown that men are simply willing to go to more extremes than women — so, once the giving flood gates have opened, they're more likely to engage in over-the-top acts of helping or kindness than women.
So, what's the takeaway here? No, we're not advocating that all men are evil and all women are saints — or even that a man needs a woman to run a business ethically or spend money in the right ways. But rather, this information provides us with an important framework for social structures, such as schools or the office. If women can provide a warming effect on males, it makes their leadership positions all the more critical. Not only is a woman's success important to women as a whole, but it could actually have a positive impact on the men we work with. There's no magic recipe here, but it sure wouldn't hurt if everyone was a little more giving. (The New York Times)
Photo: Via The New York Times 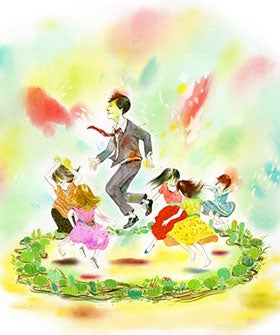 Sex Toys
This Viral Vibrator Promised Me An Epic Pounding — & It Nailed It
My best friend likes to joke that in every successful relationship there must be one person who’s a pro at putting together Ikea furniture and someon
by Charlotte Lewis
Dating Advice
These Dating Apps Will Help You Score A Vacation Fling
by Erika W. Smith
Sex Toys
A Backstage Pass To The Best Anal Toys, As Recommended By A Sex T...
For far too long, anal play has been fetishized as an extreme sport rather than celebrated for the accessible dimension of pleasure that it rightly is. So
by Karina Hoshikawa
Advertisement
Dedicated Feature
5 Things You Need To Know For Better Summertime Sex
Much like the temperature outside, libido can fluctuate. Your sex drive can be impacted by everything from the weather, to your your mood, to what you ate
by Morgan Mandriota
Most Wanted
The Best Clitoral Vibrators, According To A Sex Therapist
by Karina Hoshikawa
Sex Toys
Add Some Ooh-La-La To Your Sex Life With Frenchie’s Lovers Kit
Picture it: You’re walking along the Seine with a chocolate hazelnut crepe in one hand and your partner’s hand in the other. Just ahead, the Ei
by Charlotte Lewis
Single Files
I’ve Been Celibate For 3 Years & I Feel More Sexually Empow...
I had just lost a baby. I force fed myself tequila as I wailed over the phone to my best friend hundreds of miles away, and waited for my ex-boyfriend —
by Desiree Johnson
Most Wanted
The Best Rabbit Vibrators, According To Ecstatic Reviews
by Charlotte Lewis
Most Wanted
This Sold-Out Vibrator Is Back (But Not For Long)
You never want something until you can’t have it. So, each week in The Sell-Out, we’re getting the scoop from your favorite retailers on what‘s
by Karina Hoshikawa
Sex
How To Be A Good Kisser: The Complete Guide
Whether you’re on your first date with a new partner or you’ve been together for years, there’s nothing like kissing someone you’re really, rea
by Erika W. Smith
Most Wanted
Celebrate National Orgasm Day With These 10 Deals That Will Take ...
by Charlotte Lewis
Amazon
This National Orgasm Day, Shop The 21 Most Affordable Vibrators O...
How many of us have been burned by a budget sex toy that turned into a less-than-great experience? We’ve all been there, excited and ready to play wi
by Charlotte Lewis
Advertisement
Advertisement
Discover
R29 Stories & News
Watch
R29 Original Series & Films
Shop
R29's Most Wanted