Skip navigation!
Story from New York
Hey Cro-nutbags! It's your weekly cronut update! Though imitators have run rampant (doissants, anyone?), Le Petit Bakery in Fort Greene, Brooklyn has apparently done the unthinkable and topped the original. That's right, first reports indicate these confections (called "squats" but clearly advertised as cronut-y) are giving Dominique Ansel a run for his money. What's the difference? Well, they're square. But, far more importantly, they're sprinkled with BACON.
As it is the universally acknowledged truth that bacon makes everything 400 percent better, we think this report might actually have merit. (Update: Gothamist confirms reported deliciousness). There's only one way to find out though. Better get in line now. If we've learned anything from Cronut-A-Palooza 2013 it's that these new bacon-covered goodies will be sold out by the time we publish this post. (Gothamist) 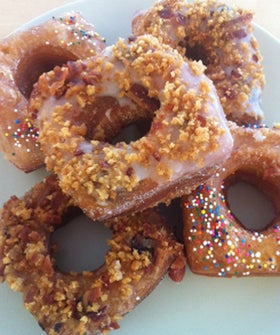 Best Coffee
Here’s 50% Off A Cool & Customizable Cold-Brew Subscription
Cold brew rose to fame throughout the 2010s with devotees swearing by apparent ability to deliver morning jitters-levels of caffeine minus any extra acidit
by Alexandra Polk
Most Wanted
The Best Prepared Meal Delivery Subscriptions, Reviewed By A Pick...
Prepared meal delivery services can be a godsend. Whether you’re a burnt-out WFH workaholic, a busy parent, a stressed-out student, or you’re s
by Mercedes Viera
Food & Drinks
The 27 Best Online Bakeries For Ordering Valentine’s Day Tr...
by Brianna Arps
Advertisement
Chocolate
These Chocolate Gift Boxes Are A Valentine’s Day Treat, Not A Trope
by Alexandra Polk
Food & Drinks
Valentine’s Day Bouquets That Are Good Enough To Eat
by Elizabeth Buxton
Food & Drinks
Sakara Life Review: What It’s Really Like To Eat It For 5 Days
Let’s face it: cooking healthy meals at the end of a long work-from-home day (in the current state of the world) is at the bottom of our likely-to-do
by Cortne Bonilla
Best Coffee
A Monthly Subscription That’s Coffee Snob Approved
Kate Spencer here, Most Wanted strategist and resident coffee enthusiast. I consider a quality cup of joe to be one of life’s simplest pleasures, and
by Kate Spencer
Most Wanted
14 Online Spots For Ordering Your NYE Party Food & Drinks
by Amanda Randone
Food & Drinks
7 Sites That Deliver Your Favorite Bottles Of Holiday Spirits ASAP
by Marshall Bright
Dedicated Feature
The Rise Of The Tablescape: How Place Settings Went From Outdated...
It has been said that the dinner party is the hallmark of civilized living. That it’s joie de vivre, manifest. And that it’s been killed by millennials
by Eliza Dumais
Food & Drinks
Here’s Where To Buy The Best Holiday Gift Baskets This Year
The bunnies have Easter baskets, Yogi Bear has picnic baskets, which means we’re giving the holidays full jurisdiction over gift baskets (and a few b
by Alexandra Polk
Shopping
21 Wine Subscription Services That Bring You The Best Bottles
by Elizabeth Buxton
Advertisement
Advertisement
Discover
R29 Stories & News
Watch
R29 Original Series & Films
Shop
R29's Most Wanted