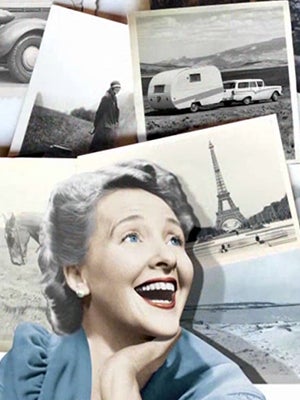 It's quite common for many of us to associate moments of sadness and distress with depression. The same can happen with nostalgia: It's easy to confuse reminiscing with a sad longing for the past. But new research is now suggesting there are benefits to feeling whimsical about the past, and it turns out all those hours spent clicking through old Facebook photos could be doing you more good than bad...and could even be a foil for depression.
The New York Times explored this notion, talking to Constantine Sedikides, a nostalgia researcher who began a study after trying to explain to a colleague the joy he received from thinking back on his days at Chapel Hill. His colleague believed Sedikides to be depressed, when really he felt it "provided a texture to [his] life and gave [him] strength to move forward.” Research done through his Southampton Nostalgia Scale has shown that "nostalgizing" (a term the scientist created) can be seen in one of two lights: beneficial or harmful. Nostalgia is both bittersweet and painful, but if used correctly, it can drum up feelings of connectedness. The feelings brought on by, say, reminiscing about a failed relationship, are human, and not necessarily negative.
Advertisement
In fact, there are all kinds of beneficial results with nostalgia. Researchers in the Netherlands found that nostalgic patterns increased with melodic sounds, and so did feelings of warmth. Nostalgia helped Chinese-study volunteers feel warmer in cold rooms, which lead researchers to believe the feeling is a tool for survival. Seeing past accomplishments and personal evolution helps put life into perspective, and can highlight why it's so great to be where you are at this very moment. Think of it as seeing your past as your future — you know where you've been and have a sense of where to go.
For depressed people, this is a good thing. It treats the past more as building blocks than pieces of time that can't be reclaimed, and shows a visual history that's tangible — and, as Sedikides believes, betters one's mood. Dr. Routlege, a nostalgia scientist, believes it "Brings to mind cherished experiences that assure us we are valued people who have meaningful lives." Which is, apparently, all we are really striving for: Lives that touch others, a trail showing that we were here, and a sense of joy when it comes to the past. (The New York Times)
For more on Constantine Sedikides' study, click here.

Guide To Great Sleep
How I Reclaimed A Good Night’s Sleep
For years, I was one of those lucky people who could fall asleep in a snap — at any time, any place, and shortly after my head hit the pillow. I know, I
by Molly Longman
Sex Toys
Amazon Is Practically Giving Away This Best-Selling Vibrator For ...
If there’s anything we can count on from Amazon, it’s a great deal on a viral product. No matter what the occasion, it’s pretty much guar
by Charlotte Lewis
Dedicated Feature
I’m 28, Make $65k, & Spent $1.5k On My Wellness Routine This Week
Welcome to Refinery29’s Feel Good Diaries, where we chronicle the physical and mental wellness routines of women today, their costs, and whether or not t
by R29 Editors
Advertisement
Most Wanted
This Vibrator & Audio Porn App Is The Valentine’s Day Date ...
If you’re anything like me, you’re dreading figuring out what to do for Valentine’s Day. No matter what your relationship status, the hol
by Charlotte Lewis
Horoscopes
The Full Snow Moon In Leo Is Igniting Our Desires
February 5 brings an exciting and chaotic full moon in Leo that will ignite our passions and desires — as well as our individuality. The lunation, which
by Lisa Stardust
Most Wanted
The Best Valentine’s Day Gifts For Every Love Language, Acc...
Love languages — we all have them, but what exactly do they mean? You’ve definitely heard about them, but in case you need a refresher, the love la
by Charlotte Lewis
Can We Talk?
My Partner’s Drinking Didn’t Bother Me Until We Merge...
Thanks for reading Can We Talk?, a sex and relationships column that aims to tackle the burning questions about sex, dating, relationships, and b
by Moraya Seeger DeG...
Sex Toys
The Top 5 Vibrators On Lovehoney’s Sex Map Are On Sale For ...
The self-proclaimed “sex nerds” over at Lovehoney get off on crunching data — and much to our (and shoppers’ everywhere) pleasure, they
by Charlotte Lewis
Sex Toys
Meet The “Snail Vibe,” The Internet’s Latest Ob...
I’m no stranger to a viral vibrator; I’ve explored the sensations of the Amazon rose to a terrifying sex tool called the Love Hamma. But someho
by Charlotte Lewis
Sex Toys
19 Valentine’s Day Sex Toys That Live Up To The Sexiest Nig...
by Erika W. Smith
Relationships
I’ve Never Dated Straight Men But I’m Ready To Try
When my long-term lesbian relationship came to an end in 2022, one of the first things I did was re-download Hinge and change my settings to include men. D
by Megan Wallace
Sex Toys
Wet For Her’s Queer-Friendly Sex Toys Are Up To 60% Off For...
Learning how to have sex with a partner is always a new fun challenge, but it can be more difficult for queer people — especially if they both have vagin
by Charlotte Lewis
Advertisement
Advertisement
Discover
R29 Stories & News
Watch
R29 Original Series & Films
Shop
R29's Most Wanted